A night out with Johnny Hawke

I first became aware of David Stuart Davies through his Holmes books and his work as editor on the mystery and supernatural anthologies for Wordsworth. I particularly liked Sherlock Holmes and the Hentzau Affair, a fun pastiche that crosses the Baker Street Detective with the Prisoner of Zenda.
If you read this blog, you understand how I find that mix irresistible.

But there’s another series of books by Davies that always intrigued me, and that’s the one that goes by the name of Johnny One Eye – and in the past two nights I’ve had the opportunity of reading Johnny’s first outing, Forests of the Night. 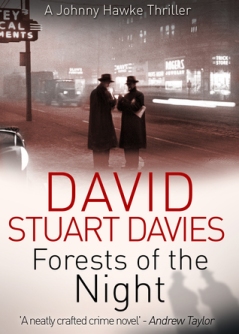 The premise is simple but interesting: at the start of the Second World War, London cop Johnny Hawke enlists to fight the Germans but, following a mishap with a defective rifle during basic training, he ends up with an eye missing, and discharged by both the Army and the force. So he sets himself up as a PI.

The Johnny Hawke stories are hard-boiled mysteries set in wartime London – and that’s enough to get me hooked. Davies has an interesting character and an unusual setting, and can build a solid mystery plot. Granted, in Forests of the Night there are a couple of coincidences that stretch the rider’s suspension of disbelief dangerously thin, but it’s OK – this is pulp fiction, and uncanny coincidences do have a place in the genre.

A fast read, filled with good dialogues and a fine sense of place, the first Johnny Hawke story has got me really curious to read the next. Given my documented interest in history and historical fiction, I’d love for the wartime London to become more present, but as things stand at the end of the first novel, should the following titles replicate the mood, the style and the formula, I’d be satisfied.

A good diversion in these winter nights.