A tour guide to strange, (not so) far places

Searchers after horror haunt strange, far places. For them are the catacombs of Ptolemais, and the carven mausolea of the nightmare countries. They climb to the moonlit towers of ruined Rhine castles, and falter down black cobwebbed steps beneath the scattered stones of forgotten cities in Asia. The haunted wood and the desolate mountain are their shrines, and they linger around the sinister monoliths on uninhabited islands.
(H.P. Lovecraft) 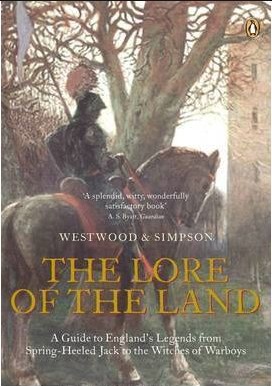 I’m taking a moment to plug a book that’s been a great resource for my stories and a great read altogether.
I’ve been checking it out again during the Halloween season, because there is an increase in the request for ghost stories and supernatural horror, and before that it provided me with one of the two ideas on which I built my story in the Zappa & Spada anthology.

The book is called The Lore of the Land and it is a massive tone by Jennifer Westwood and Jacqueline Simpson.
Presented as A Guide to England’s Legends from Spring-Heeled Jack to the Witches of Warboys, this is an encyclopedia-style volume, with entries arranged geographically and alphabetically, and extra essays about specific topics – giants, witches, treacle mines…

The volume published by Penguin is actually an update and expansion of another wonderful book, called Albion, a Guide to Legendary Britain, by Jennifer Westwood. I bought it when I was a student, and it’s still here on my shelf.

The Lore of the Land comes with maps, photos and a handy index, and it makes for both an interesting armchair adventuring book, and for a guidebook – it would be great to be in the UK, and take weekends off to go and visit places like Llanymynech in Shropshire, where the Ogo Hole is, haunted by a blind fiddler, or to Barrow Hill, on Mersea Island, Essex, where a Roman centurion haunts The Strood.
Or places like that, anyway.

I love such compendia of legendary and folk facts, and the Westwood & Simpson is the sort of standard to which I compare all others. It is huge, detailed, and reasonably cheap all things considered.
And a treasure trove to writers of imaginative stories.

More posts from author
Sunday, 24 May 2020 Sleeping patterns and other stuff
Saturday, 23 May 2020 Adventure of the Dali Prince
Friday, 22 May 2020 Five minutes in Ancient Egypt