A visit to Goblin Tower 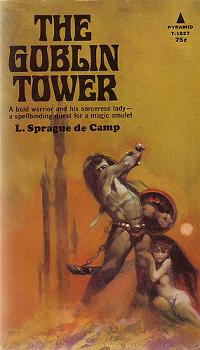 The Goblin Tower is a 1968 novel by Lyon Sprague de Camp, first in the series known as the Reluctant King.
The novel follows the adventures of the reluctant King Jorian, in fact an engineer and watchmaker, that by chance finds himself in the shoes of the king of Xylar. But tradition has it that the career of the king of Xylar has an expiration date – expiration being the proper word, as it ends on the hangman’s stock.
The frantic activity of our hero to abandon the title, the throne, and the country, before his position becomes too compromising sets the pace of the story. It is not that abroad things are any better, since all the nations of the continent are prey to a political and social eccentricity that slips into the grotesque.
And in the utterly lethal. 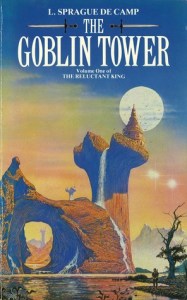 The Goblin Tower is a classic example of Sprague De Camp’s own brand of fantasy – a fantasy that is not very respectful of the epic inspiration or heroic angles. Lyon Sprague de Camp, who just as the protagonist was an engineer and a materialist, has little patience for miracles, and populates his own universe of dishonest wizards, elusive and scoundrel-ly heroes, princesses of very little virtue, and he seems to want to work against the sense of wonder and the “magical” atmosphere.
Yet the story works.
In the cycle of the Reluctant King, Sprague de Camp then plays at inventing political structures and forms of government that sound mindbogglingly weird – the dictatorship of the Great Bastard, the regime of the Hereditary Survivor – but are actually political systems from our own history , only with a more amusing and objectively descriptive name.
In this sense, De Camp’s fantasy is a “playful” fantasy, which plays with the basic ideas of history, extending them to the extreme consequences according to a strict logic. Not different, in the end, from what many years later Terry Pratchett would do – with the advantage of a shared background with readers that is infinitely wider than De Camp and his audience, on which to base his intellectual games. 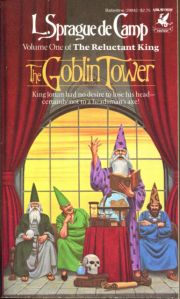 But there is also another factor to consider – De Camp’s fantasy, beyond the playful component, is also an “ideological” fantasy, which uses the fantastic to carry on a rationalist vision. After all, the wizards, the strange ridiculous beasts and the empty pomp of the pseudo-medieval kingdoms of De Camp help the author, in a very funny way, to plead the cause of reason, of empiricism, of scientific materialism.
And that’s no little thing.
And Sprague De Camp does not fail to overturn many elements of classic fantasy – telling a story in which the hero does not come to the throne from humble beginnings, but ends up a broke wanderer after losing the throne.
An idea akin to Michael Moorcock’s, who in those same years is narrating the fall of Elric from the throne of Melniboné.

The novel takes place in a world parallel to ours – and therefore has a scientific (pseudo) rationalization of the kind that John W. Campbell liked when he edited “Unknown Worlds”, and according to some, the humorous twists of the Sprague De Camp production would be due to the influence of Campbell, who believed that humor was synonymous with literary sophistication, and therefore spurred his authors to a put their foot down on the accelerator of comedy.

Silly Autobiographical Detail – I read Goblin Tower in the original edition published by Grafton in the ’80s, in a period in which the Italian edition was a very much sought-after collector’s item.