Back to Planescape, sort of

I loved the Planescape setting for the old AD&D.
Somebody described it as “philosophy with sticks”, and it was all right with me. I liked the way in which the game setting was presented, with the incredible Tony Di Terlizzi Illustrations and all the little bits of fun such as the slang, and the strange mix of Elizabethan, not-exactly-steampunk, sword & sorcery and, yes, philosophy.
Planescape was the sort of setting in which you ended up investigating who had actually killed a god, but in the meantime had the opportunity for a lot of weird shenanigans, swordplay and wordplay.
It was great.

My small collection of Planescape books is still here on my special RPG shelf, and sometimes I fantasize about setting up a new campaign.
Shake the pillars of creation for one last time.

The only thing that never really did it for me were the Planescape novels.
Oh, good writing and all that but… they did not work.
Not for me, at least.

Then, a few nights back, I opened one of my secret emergency boxes and I fished out a book I had saved for a moment of need.
What with the heat, the overworking and everything else, I really needed a good, fun read. And I got my wish. 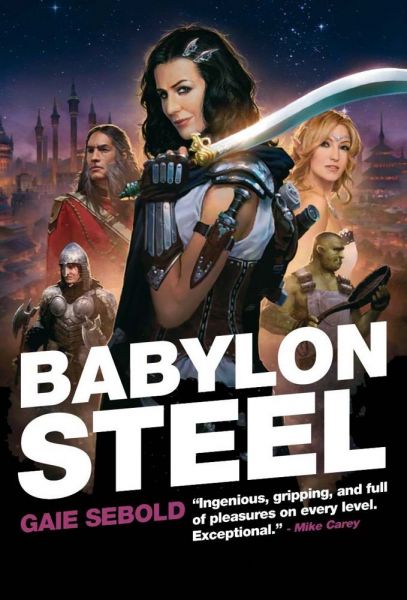 And really, Babylon Steel, by Gaie Sebold, not only is a great sword & sorcery novel. Not only ticks all the right boxes for me mixing comedy and noir, and building two parallel narratives and setting them on a collision course. No, Babylon Steel is a perfect Planescape adventure, without the T$R copyrights in place.

Multi-planar adventure? Check.A city at the center of an intersection of many planes? Check.Strange creatures including an angel managing a restaurant and a thing that REALLY looks like a Githyanki manning a downtown bar? Check.Gods and avatars and what-not interacting with mortals? Check.Adult themes and sexy bits? Check.

I like it so much that I am really forcing myself to no more than twenty pages per day.
There is a sequel, thankfully, but this stuff is so good I need to make it last as long as possible.
And then go and check everything else written by Sebold.