Back to the (Captain) Future

Captain Future was a pulp series of science fiction novels that started in 1940, mostly written by Edmond Hamilton. The stories, featuring Curtis Newton, aka Captain Future, aka The Wizard of Science were classic space opera with a pulp hero twist – Captain Future was sort of Doc Savage in space, complete with a team of quirky helpers and all that. 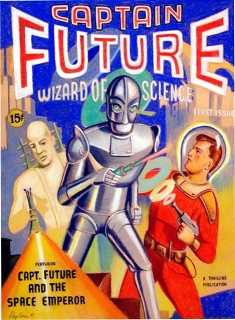 Now, for us here in Italy, and for my generation, Captain Future is a special thing, not much because of the novels – only a few were translated, and quickly disappeared – bu t because in the early ’80s the Toei Animation series was distributed in my country, a part of the “Japanese anime invasion”. To me it was a special treat, because I knew Hamilton, having read a few of his novels, and I had often heard mentioned the character but never been able to track down the books. Back then I was in my early teens and I loved Golden Age authors like Hamilton and Williamson, and so I really enjoyed the series (and to this day, I still like the jazz-based original soundtrack by Yuji Ohno, the same guy that did the Lupin III soundtrack).

It was therefore with a lot of expectations that I (finally) got myself a copy of Allen Steele’s 2017 novel Avengers of the Moon, that is presented as the first volume in an authorized reboot of the old Hamilton novels, written by noted hard SF author Allen Steele.
Expectations, I had, and also a few doubts – why reboot the old stories?

The reason, of course, is that 1940s/1950s pulp science fiction has not aged well – not from a scientific point of view (the Captain Future stories always included a didactic content), and not from a lot of other points of view.
And while it’s all good and fine as long as we apply a certain amount of historical perspective, the idea of rebooting the series in order to make it more appealing to the younger audiences is not half bad. 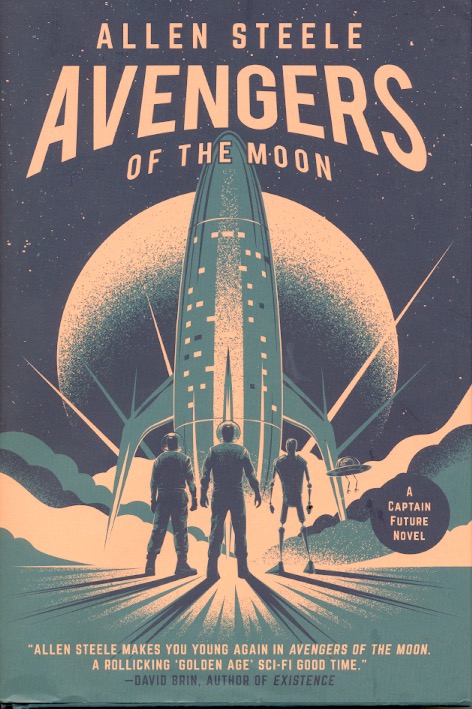 And what Allen Steel offers us in this book is a fine update of the old stories – better science (we get photon sails and Alcubierre engines and what not), a general update of the solar system as presented in the old novels, and a lot of fine touches.
We also get a liner ship doing the Earth-Mars cruise called Leigh Brackett, and that is really appreciated.
The story is standard pulp fare, provides us with an origin story for Curtis Newton/Captain Future, and then turns in an update of the old The Magician of Mars storyline. 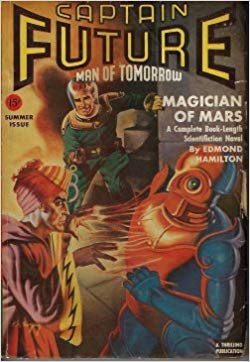 And here is where things start creaking a bit.
Because if updating the science and technology is a straightforward process, updating the plot is quite another story, and a lot of devices that worked in the summer of 1941 (when The Magician of Mars first was published) now have a hard time cutting it with the readers.

The characters make choices that do not shine for intelligence, some twists appear contrived, and while it’s good seeing Joan Randall getting an upgrade and actually being a pro-active, kickass female and not just a damsel in distress, Curt Newton’s attitude towards her is all-out 1940s and painfully adolescent… and as a result, Captain Future comes across as a bit of a jerk.
This is particularly grating.

The problem is – probably – that Steele has to update the franchise while still maintaining all the distinctive elements of it, while trying not to let down old fans.
The end result is a strange hybrid.
Not that I disliked it – it’s a fine romp and lots of fun, Grag is particularly good and the new, improved Solar System is quite a fun venue to explore. I really hope there will be more novels in the series. But I also hope Steele will go all in and update not just the tech, but also the characters and the storytelling. As is now, Avengers of the Moon is quite fun, but not completely in tune with modern sensibilities.

And as an appendix, here’s a sample of the soundtrack I mentioned…

More posts from author
Tuesday, 18 February 2020 The many children of Conan
Monday, 17 February 2020 One evening with the Snake Woman
Sunday, 16 February 2020 Re-reading the Three Musketeers