Blogging from A to Z: G is for Gladius 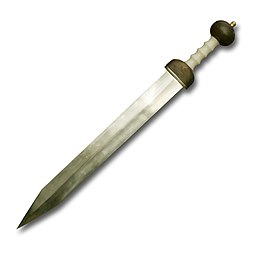 Today’s entry in my series of facts about Pompeii is gladius. Most of the time, when we think of a gladius, a specific type of Roman short sword comes to mind. Interestingly enough, though, the word is simply Latin for “sword,” and would have referred to any such type of weapon. It is also the word from which gladiator, meaning “one who fights with swords,” is derived.

There are four verified types of Roman gladius, one of which was found at Pompeii. Rather than describe the differences myself, I thought I would share this video made by a Roman legionary reenactor. Enjoy!