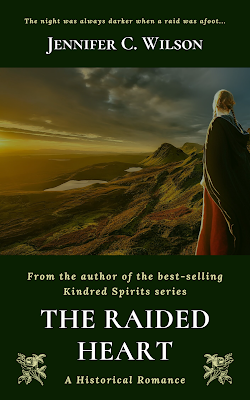 Available for pre-order
on Amazon UK and Amazon US
The Raided Heart is the first of "The Historic Hearts", a collection of historical romantic adventures set in Scotland and the North of England.
Hi Tony, and thanks so much for featuring The Raided Heart on your blog today. I’ve joked that this is the “Trigger’s Broom” of books, a reference I hope most people still get, but I’ll explain more for those who don’t…
The Raided Heart started life when I was 13, which, sadly, is not just ten years ago, but rather, twenty-two. If the book was a person, it’s now legally able to do practically anything it wants to! But don’t worry, if you’re tempted to download a copy – it isn’t ‘exactly’ the same book. The original version was set in 1530s Scotland, well before I understood the notion of historical accuracy in fiction.
My main references for historical fiction at that point were Robin Hood: Prince of Thieves, and The Princess Bride. Both wonderful stories, but not so great at the ‘being true to the facts’ side of things. But, the story lived with me for twelve years, until 2009’s NaNoWriMo came about, and I thought it was time to look at the old manuscript I knew I had lying around somewhere on my hard-drive.
That’s when I realised how awful some of the plot was, including additional secondary characters included for no reason whatsoever, appalling dialogue (where I’d even bothered with speaking at all), and oh yes, a completely made-up King of Scotland, Edmund. Hmm…
At the time, I was living in Hexham, and had been re-reading a lot of the history of the region, including the fascinating border reivers, groups of families both sides of the England-Scotland border, notorious for their feuding, raids and violence. The perfect back-drop to a historical romance?!
Undaunted, I went ahead and did my research, keeping the action in the 1530s, but moving from Scotland to Northumberland, using a lot of the days out I was having to build a new world for the story. Plus, Hexham is home to the first purpose-built gaol in England, which gives a great insight into the world the reivers inhabited…
I merged a lot of the supporting characters, amended the plot points which weren’t working, and in November 2009, wrote a whole new 50,000 words. There was better dialogue this time. Some, anyway.
Move forward almost another decade, with a series of ghostly tales published, the story kept niggling away at me, and finally, the time was right to see what I could do about self-publishing The Raided Heart. It needed another rewrite, but the words wouldn’t flow. What could I do?
Add my muse, of course. So we moved era again, from 1530s to 1470s, when Richard III was Duke of Gloucester, and the Warden of the West March, installed in Carlisle Castle, and trying to keep the peace along the Scottish border. NOW the words flowed!
Which brings us to now, with Trigger’s Broom displaying new characters, new location, new time period, but essentially, the same plot. To call The Raided Heart a labour of love is an understatement. I’m almost sad to be letting it go from my hard-drive, and releasing it into the wild, but I think, at last, it’s time, and thanks to wonderful editing and support from fellow Ocelots, I know it’s definitely the best it could possibly be.  I hope you enjoy reading it!
Jennifer C. Wilson
# # #
About the Author 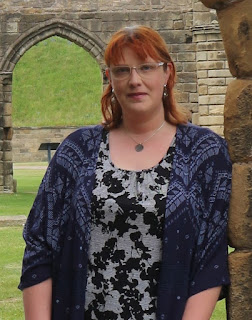 Jennifer C. Wilson has been stalking dead monarchs since childhood. At least now it usually results in a story, it isn’t considered (quite) as strange. Jennifer won North Tyneside Libraries’ Story Tyne short story competition in 2014 and, as well as working on her own writing, she is a founder and co-host of the award-winning North Tyneside Writers’ Circle and has been running writing workshops since 2015. Her debut novel, Kindred Spirits: Tower of London was published by Crooked Cat Books in 2015, with the fourth in the series, Kindred Spirits: York, released in early 2019. Her timeslip romance The Last Plantagenet? is published through Ocelot Press, an authors’ collective formed in 2018. Find out more at Jennifer's website jennifercwilsonwriter.wordpress.com and follow her on Twitter @inkjunkie1984
Original link