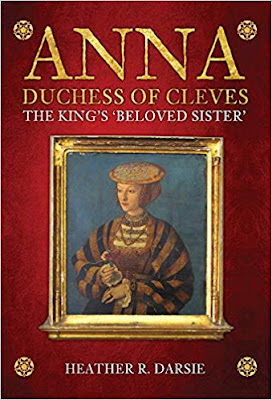 Available for pre-order from Amazon UK
and Amazon US
It's unlikely that Henry VIII called Anna (Anne) of Cleves 'the Flanders Mare' (later writers added that nice little detail) and far from being unlucky to have been his wife, Anna seems to have done rather well from becoming 'the king's beloved sister.
I enjoyed reading this wonderfully researched new book from Heather Darsie, which returns to  primary sources. It must have helped that the author is fluent in German, and was able to visit archives and museums all over Europe.
Anna’s story begins with her life as a child, born as a duchess at Burg Castle (now reconstructed and a major tourist attraction), and at the rather staid Cleves court, where the only education she had was in embroidery.
It's hard not to feel sympathy for Thomas Cromwell, as Anna 'ticked most of the boxes' and brought an important alliance. He was unlucky not to realise the significance of the cultural differences between the German and English courts - or that Anna only spoke German (although she was desperately trying to learn conversational English.)
Like many modern celebrities, it seems Anna was poorly advised, as she changed from her wedding dress into a 'gown like a man's gown' - perfectly acceptable in Germany but a mistake in fashion-conscious England. She eventually swapped her odd (to English tastes) German hat for a French hood, but the damage to her reputation had been done.
With hindsight, it seems credible that King Henry was less concerned with Anna's looks (or what she wore) than with her young lady-in-waiting, Catherine Howard. It's also worth remembering that Catherine's uncle, the influential Duke of Norfolk, would have good reason to encourage Henry's 'interest' in his niece.
Although Anna had no choice other than to agree the annulment of her marriage, it now seems she had a lucky escape.  She became one of the richest women in England and seems to have been a positive influence on her step-daughters, Elizabeth and Mary (Mary was only a few months younger than Anna).
Anna is the only one of Henry VIII's six wives to be buried in Westminster Abbey - thanks to his daughter Queen Mary I. (Anna's tomb is on the south side of the High Altar, a low stone structure with carvings of the initials AC with a crown, lions' heads - and a skull and cross-bones!)
Tony Riches
# # #
About the Author 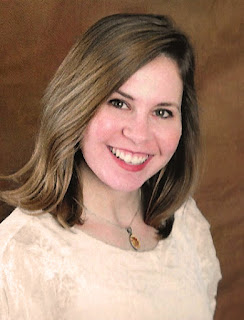 Heather R. Darsie lives in the United States. She has a Bachelor of Arts in German Languages and Literature, and a Juris Doctorate. During her time at university, she studied in Costa Rica and France, with visits to Germany and other countries. She is currently studying for an MA in Early Modern History. Find out more at maidensandmanuscripts.com  and follow her on Facebook
Original link