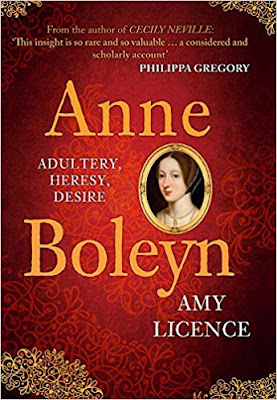 New on Amazon UK and Amazon US
Despite the huge amount written about Anne Boleyn, for me she remains an intriguingly elusive figure. Even the well-known portraits might not be of her, and her many enemies had good reason to darken her reputation, both during her short lifetime and afterwards.
This fascinating new book from Amy Licence is possibly the most comprehensive review of the life of Anne Boleyn to date. Amy opens with the admission that Anne has always been one of her favourite heroines, and sets out to show Anne as defiant, defining and brave, and her 'career' as the culmination of the ambitions of generations of her ancestors.
Beginning with useful background on the rise of the Boleyn family, this book follows Anne's story from her birth to her sad end. Interestingly, almost everything we know about the last days of Anne Boleyn is filtered through the pen of Sir William Kingston, Constable of the Tower of London, in his detailed reports to Cromwell. He is said to have told her the execution would not hurt, as it was to be 'cleverly' done. (His wife, Lady Mary Kingston, might have been his 'spy' when she attended on Anne Boleyn during the queen's 'doleful'  imprisonment in the Tower.)
I particularly liked the wealth of details of the court of Henry VIII, which show how some other writers might have over-simplified the complexity of Anne's situation. We still hope for answers to the many questions raised throughout this book, yet this epic account of Anne Boleyn's life is a perfect companion to Amy's excellent Catherine of Aragon. Highly recommended.
Tony Riches
# # #
About the Author 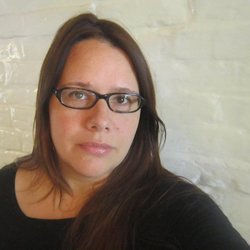 Amy Licence is an historian of women's lives in the medieval and early modern period, from Queens to commoners. Her particular interest lies in the late fifteenth and early sixteenth century, in gender relations, Queenship and identity, rites of passage, pilgrimage, female orthodoxy and rebellion, superstition, magic, fertility and childbirth. She is also a fan of Modernism and Post-Impressionism, particularly Woolf and the Bloomsbury Group, Picasso and Cubism. Amy has written for The Guardian, the BBC Website, The English Review, The London Magazine, The Times Literary Supplement and is a regular contributor to the New Statesman and The Huffington Post. She is frequently interviewed for BBC radio and made her TV debut in 2013, in a BBC documentary on The White Queen. You can follow Amy on twitter @PrufrocksPeach or like her facebook page In Bed With the Tudors. Her website is www.amylicence.weebly.com
Original link