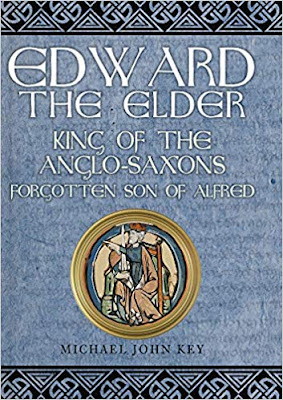 New on Amazon UK
and for pre-order at Amazon US
History has been unkind to 'the forgotten' Anglo-Saxon king, Edward the Elder, son of King Alfred the Great and father of Æthelstan. Part of the reason for Edward the Elder's low profile is the lack of contemporary biographical records, so this new book by Michael John Key is therefore a good way to help put the record straight.
For me, the most useful section of this book deals with the analysis of Edward's legacy. Without Edward's successes, Æthelstan would have had a very different life, so his contribution to British history is not to be underestimated.
Edward the Elder emerges from this fresh examination of the evidence as an effective administrator with a good grasp of strategy - ideal qualities for the emerging political class of kingship. Perhaps the one quality he lacked was the talent for self promotion which created our most memorable kings.
I was interested in what Michael John Key has to say about Edward the Elder's final resting place. It seems the story of labourers accidentally breaking into his undisturbed tomb is a myth, although advances in scientific analysis mean we might have a small piece of Edward's pelvic bone - but even that could belong to Alfred the Great.
Well researched and engaging, I feel much better informed after reading this book and recommend it  to anyone with an interest in the Anglo-Saxon kings.
Tony Riches
# # #
About the Author
Michael John Key has spent his professional career in the oil, gas, and petrochemical Industry. After retiring to concentrate on writing he has researched and studied medieval history for many years, with a particular interest in the Anglo-Saxon period. He has a BA History Honours Degree. He was born in Leigh, Lancashire, but now lives in Hampshire, where he has spent most of his life.
Original link