Author Spotlights, Interviews & Guest Posts
B. L. Blair
I love animals. It's one of the reasons I starting writing the Lost and Found Pets series. My family had a dog when I was a young child, and I enjoy watching them. They always look so happy. Happy to see you, happy to be out and about, just plain happy. However, I prefer cats.
Cats aren’t always happy. Sometimes they are angry, sometimes content, sometimes playful, and sometimes “Leave Me Alone!” This contradictory nature is probably what I like best about them. They're interesting.
I have had three cats in my life. I’ve been lucking that they each lived a fairly long time. The first cat I had was named Nuisance. I got her when I was eleven. I am the youngest of six kids (by almost seven years). My brothers had just graduated high school and were headed for college, and I was going to be the only child in the house. My mother thought I might be lonely so she let me get a cat. When I was asked what I was going to name her, I said I need to know what it was going to be first – meaning male or female. My mother said it was going to be a nuisance. She was a pretty calico, and I spent a lot of time with her in high school. She died while I was in college.
My second cat was Nikki. I got her as a kitten the year I graduated from college. She was pure black. She was a meanie. Well, to everyone but me. She would swipe or hiss at anyone she didn’t know. She would let someone pet her for a little while, but I could tell when she had enough. They wouldn’t believe me when I told them to stop petting her. She got them every time. She would sleep curled around my head or beside me on the bed. Nikki lived to be seventeen.
My third cat was Darcy. She was a soft orange and one of the sweetest cats I’ve ever known. Very affectionate. I adopted her from the SPCA. They had been told she was spayed and declawed. She was declawed. Three days after I brought her home she had two kittens. As we already had another cat, we had to give the kittens to the SPCA, but they were fun while we had them. Darcy live to be sixteen and had a lot of health problems the last few years of her life. I had to let her go last February. It’s been almost a year, and I still tear up when I think about her.
About two months ago, I adopted my fourth cat. Zoey is a muted calico. She is not as affectionate as Darcy and not as mean as Nikki. She has her own personality which I’m getting to know. She doesn’t like to get her picture taken, but here’s one that isn’t too bad. 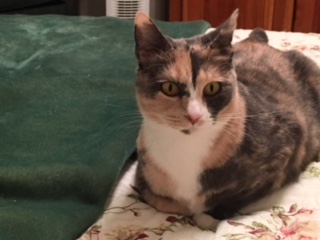