Chocoholic Charity Penn must smoke out the killer to stop her newly inherited beachside chocolate shop from going up in flames in Dorothy St. James’ decadent follow-up to Asking for Truffle.

Chocolate shop owner Charity Penn is finally settling into life in the quirky South Carolina seaside town of Camellia Beach cooking up chocolate treats. She’s even helped organize the town’s lively beach music festival which has brought rollicking crowds eager to dance the Carolina shag. That is, until one of the band’s lead singers is found dead beside a beach bonfire.

While also trying to balance the amorous attention of music star Bixby Lewis, in town for the festival, and her quest to perfect a new hot flavored bonbon, Charity dives into the investigation. Though it’s more spice than sugar when she discovers a threatening note, comes across decades of age-old secrets, and Bixby comes into the line of fire when a gas grill explodes on the deck of a beachfront house.

Now Charity must turn up the heat and catch the killer before her chance melts away in Playing With Bonbon Fire, the delightful second Southern Chocolate Shop mystery served up just right for fans of JoAnna Carl and Joanne Fluke. 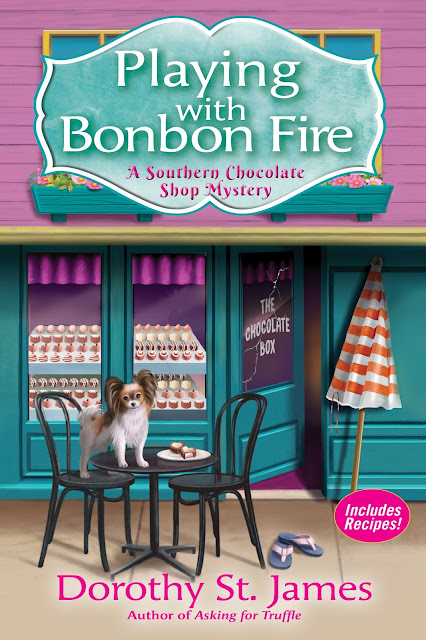 Charity Penn grew up in Chicago and worked in advertising in Madison, Wisconsin. She never felt as if she’d found her home until she moved to Camellia Beach, South Carolina and inherited the Chocolate Box, a bean-to-bar chocolate shop on the island. Although she’s not much of a cook, the self-described chocoholic knows how to pair flavors with different varieties of chocolates to create the most amazing mouth-watering candies.

Charity, how did you first meet Dorothy?
Dorothy St. James was wandering around in a funk when I met her. She wanted to get back to writing after taking a few years off to be a full-time mom, but she wasn’t sure what to write about. Every character she’d interviewed made her doze off before the interview was over. (She was taking care of a 2 ½ year-old at the time and tended to doze off easily from lack of sleep.) And then I walked in with my arms filled with emotional baggage and personal mysteries, and Dorothy immediately sat up and took notice.

Want to dish about her?
She’s a neurotic one, my writer. I mean, I thought I had problems, and then I started telling my life story to Dorothy St. James. And I was all like, “Whoa, stop obsessing over where to put that dang comma already. Just write what I’m telling you and not worry so much about how it’s coming out until the edits.” She’s nice, though. She truly wants my story told right. She wants the truth about everything to come out. Sometimes that scares me.

Why do you think that your life has ended up being in a book?
My life is a mess. Or at least it was. I was a walking, living version of a car wreck. People were rubbernecking all over the place to see what was going on in my life. Of course all that drama has ended up in a book. Honestly, I’m surprised it took this long to happen.

There are also these pesky murders that keep happening around me. I hate it. I can’t stand to see my friends in danger, so of course I do my best to help the police conduct their investigations. Detective Gibbons is capable, but he doesn’t live on Camellia Beach. He hasn’t heard the conversations I’ve heard. And sometimes he doesn’t listen to me like he should, which is all the more reason why I’ve needed to take matters into my own hands once or twice.

Tell us about your favorite scene in the book.
I loved, loved, LOVED it when Bixby Lewis (yes, the Bixby Lewis who is the hottest pop star in the country right now) kissed me. It does amazing things to a woman’s ego to be kissed by a hunky rock star. I get tingly all over just thinking about it.

What do you like to do when you are not being actively read somewhere?
When I’m not solving mysteries on the pages of a book, I’m either making chocolate or eating it. Chocolate is my passion. Getting everyone to taste high-quality chocolate from the more flavorful cacao beans is my mission. Not all chocolates are created equal. The complex flavors you get from a specially sourced cacao bean will make you think you’ve found Nirvana.

If you could rewrite anything in your book, what would it be?
Let’s be honest with ourselves—we all sometimes make stupid decisions that we regret. I’m not too proud to admit that I might have made a mistake or two along the way. One recent one that really makes me blush is how goofy I acted around the famous and gorgeous pop star Bixby Lewis. He gave me one kiss and, apparently I lost my mind. It wasn’t my best moment. I cringe when I think about it. I acted like a silly fan-girl. I wish I had stayed cool. If I could do it again, I’d like to rewrite all of that. Some things might have happened differently if I had.

What’s Dorothy’s worst habit?
She keeps upping the stakes. I solve one problem, and bam! what I did to solve it creates an even bigger problem. I’m mean, give me a break already! I’m working hard here.

How do you feel about your life right now?
While I don’t like that people keep getting murdered around me—that’s not good—I love my life. I’m blessed. I’m truly blessed. I’m living on an idyllic Southern island. I own the best chocolate shop in the world. And I’m surrounded by people who love me.

What, if anything, would you like to change? That’s easy. My family. Let’s just say they’re not friendly people and leave it at that.

Describe the town where you live.
I live in the small town of Camellia Beach, which is located a few miles outside of the historic city of Charleston, South Carolina. At first glance, the town isn’t much to look at. The buildings could all use with a fresh coat of paint. Everything looks rusty and old. But the people who live here are gems. They’ve welcomed me with open arms and are always happy to help out with anything. And the buildings in the town don’t dominate the landscape, like has happened to some beach towns. The houses and businesses are generally one-story. The quaint small cottages that have been torn down nearly everywhere else can still be found on Camellia Beach. Also, ancient oaks trees and tall grasses are still a large part of the island. It’s wild and beautiful here. I have truly found a paradise here in Camellia Beach.

What makes you stand out from any other characters in your genre?
I grow and change (hopefully improve) with each book. I’m not a static character. I don’t always make the best decisions. But I’m trying. I’m really trying to improve. And there is nonstop action on the page. This isn’t your grandmother’s cozy mystery. 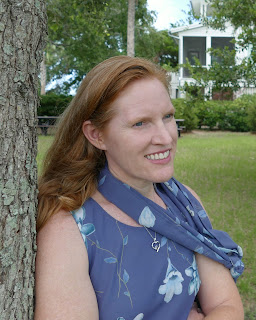 Mystery author Dorothy St. James was born in New York but raised in South Carolina. She makes her home on an artsy island community in South Carolina with her husband, a neurotic dog, and fluffy cat. Though writing has always been a passion for her, she pursued an undergraduate degree in Wildlife Biology and a graduate degree in Public Administration and Urban Planning. She put her educational experience to use, having worked in all branches and all levels of government including local, regional, state, and federal. She even spent time during college working for a non-profit environmental watchdog organization.
Switching from government service and community planning to fiction writing wasn’t as big of a change as some might think. Her government work was all about the stories of the people and the places where they live. As an urban planner, Dorothy loved telling the stories of the people she met. And from that, her desire to tell the tales that were so alive in her heart grew until she could not ignore it any longer. In 2001, she took a leap of faith and pursued her dream of writing fiction full-time.
Known for the White House Gardener Mystery series

, Dorothy is going back to her roots and setting a mystery series in a Southern beach town much like the one she’s called home for the past 20 years. The Southern Chocolate Shop Mysteries