He’d promised Sheriff Payne that he wouldn’t take any more matters into his own hands. So, when on a leisurely morning drive, SEAL-trained Thomas O’Shea sees two girls attacking a boy on a sidewalk, he opts not to intervene. When the boy is later murdered in the local hospital though, all promises are off. What seems at the start to be a simple case of gang activity turns out to be far more. Even O’Shea, who has seen more than his share of evil, could not have guessed what is about to transpire . . .

Title: The Face on the Other Side 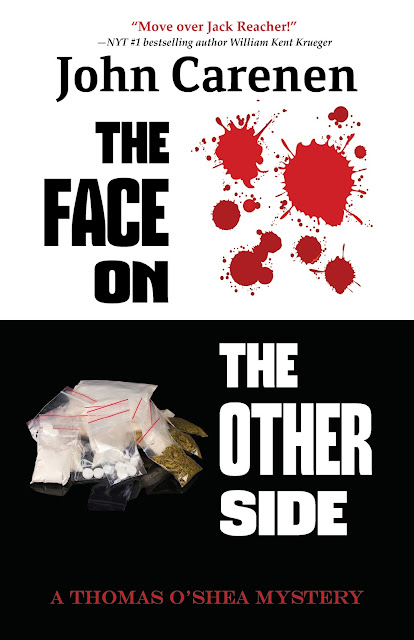 Thomas O’Shea, SEAL-trained private citizen, loses his wife and two teenage daughters, killed by a drunk driver. He moves from Georgia back home to Iowa to seek healing, in private. But he keeps bumping into questionable situations, begins asking questions, and uncovers bad things. And then people try to stop him, without success. He falls in love with Liv Olson, high school English teacher. He befriends an array of quirky characters in the small, northeastern Iowa village of Rockbluff.


Thomas, how did you first meet John?
We met in a bar in Iowa City. He was buying.

Want to dish about him?
Sure, he’s as big softy who likes being my friend and hearing about my adventures.

Tell us about your favorite scene in the book.
That would be when I punch a psychopathic in the mouth.

I love it when that happens. If you could rewrite anything in your book, what would it be?
I’d punch the psychopath more than once.

Tell the truth. What do you think of your fellow characters?
I love ‘em all but won’t tell them. That would be too emotional.

Do you have any secret aspirations that John doesn’t know about?
I’d like to grow prize-winning roses, but don’t tell him that. He’ll think I’ve gone soft.

What’s the best trait your author has given you?
A code about honor and making things right.

What do you like best about Lunatic Mooning?
I like best that he has my back.
Least?
I like least that he won’t tell me about his wife, wives, and/or girlfriends. Very private in that area. He’s an Ojibwe Indian, so what else can you expect? Very stoic.

What’s John’s worst habit?
He doesn’t write enough about me.

How do you feel about your life right now?
I’d say I’m at peace and hope that bad things go away in my adopted home town of Rockbluff, Iowa. At this point, I wouldn’t change anything. I trust God.

If your story were a movie, who would play you?
Woody Allen. No! Seriously, I’d have xxxxxxx play me.

Describe the town where you live.
Rockbluff, Iowa is more of a village than anything else. Just a few thousand people in a picturesque place where a lovely river runs through it. Beautiful bluffs and beautiful people, except for the occasional bad ones.

What makes you stand out from any other characters in your genre?
I’d say my twisted, some say dark, sense of humor.

Will you encourage John to write a sequel?
I ordered him to, and he’s well on his way. 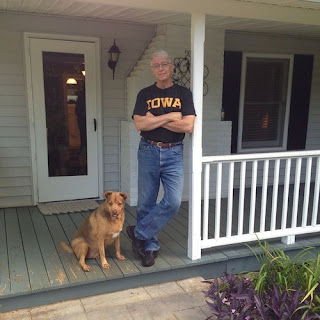 John Carenen, a native of Clinton, Iowa, graduated with an M.F.A. in Fiction Writing from the prestigious University of Iowa Writers Workshop and has been writing ever since. His work has appeared numerous times in Reader’s Digest (including a First Person Award), McCall’s, Dynamic Years, and other periodicals. He has been a featured columnist in newspapers in Morganton, North Carolina and Clinton, South Carolina. His fiction has appeared in regional literary magazines. A novel, Son-up, Son-down, was published by the National Institute of Mental Health. He is happily married to (long-suffering) Elisabeth, and they have two grown daughters, Caitlin and Rowe. When he isn’t writing, he thinks about getting in shape, cheers for the Iowa Hawkeyes and Boston Red Sox, and takes frequent naps. He has traveled extensively, having visited 43 states and 23 countries. He is a USAF veteran, having served in the Philippines and Massachusetts. A retired an English professor at Newberry College in Newberry, South Carolina, he is hard at work on another novel.