When the daughter of a murdered neighbor asks Anastasia to create a family scrapbook from old photographs and memorabilia discovered in a battered suitcase, she agrees—not only out of friendship but also from a sense of guilt over the older woman’s death. However, as Anastasia begins sorting through the contents of the suitcase, she discovers a letter revealing a fifty-year-old secret, one that unearths a long-buried scandal and unleashes a killer. Suddenly Anastasia is back in sleuthing mode as she races to prevent a suitcase full of trouble from leading to more deaths. 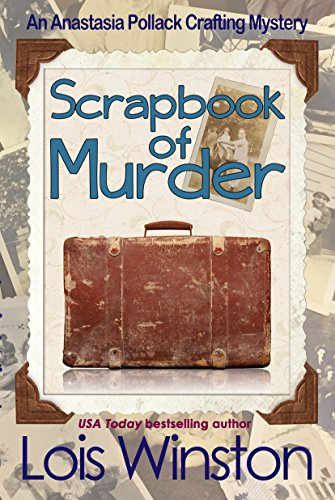 When magazine craft editor Anastasia Pollack’s husband permanently cashed in his chips in Las Vegas, her life crapped out. Previously clueless about her husband’s gambling addiction, she’s now dealing with debt greater than the GNP of Uzbekistan. She’s also stuck with her semi-invalid Communist mother-in-law as a permanent houseguest, who’s sharing a bedroom with her mother, a self-proclaimed descendant of Russian nobility. Anastasia’s two teenage sons, her mother’s cat, her mother-in-law’s dog, and a Shakespeare-quoting parrot all vie for space and attention in her too-small suburban home.

When Anastasia returns to work, she discovers the body of the magazine’s fashion editor glued to her office chair. The woman collected enemies and ex-lovers like Jimmy Choos. When evidence surfaces of an illicit affair between her and Anastasia's husband, Anastasia becomes the prime suspect. Suddenly she’s thrust into the role of reluctant amateur sleuth to prove her innocence.

As the series progresses (there are currently six books—Assault With a Deadly Glue Gun, Death By Killer Mop Doll, Revenge of the Crafty Corpse, Decoupage Can Be Deadly, A Stitch to Die For, and Scrapbook of Murder and three novellas—Crewel Intentions, Mosaic Mayhem, and Patchwork Peril), Anastasia takes on various moonlighting jobs to pay down her debt, only to find herself constantly tripping over dead bodies, forcing her to continue sleuthing. The one bright spot in her life is photojournalist and possible government operative Zack Barnes. Simmering sexual tension between the two eventually leads to romance.

Anastasia, how did you first meet Lois?
I was a typical middle-class suburban working mom when author Lois Winston hijacked my life. Now I’m a penniless widow who’s constantly dealing with murder and mayhem. Why would she do that to me? I’m a magazine crafts editor, not Jane Rizzoli!

Why do you think that your life has ended up being in a book?
I don’t know, but I definitely lost the heroine lottery. Lois used to write romance. Why couldn’t she have chosen me for a heroine in one of her earlier romances? Six books and three novellas into the Anastasia Pollack Crafting Mysteries, and I’m still looking for my happily-ever-after. Lois isn’t a total sadist, though. She did allow hunky Zack Barnes to rent the apartment over my garage when she could just as easily have rented to a couple of rowdy college kids. So I have to thank her for that. But then, of course, she couldn’t leave it at that. I seriously suspect that along with being a photojournalist, Zack is also a government agent, and the photography gig is merely a cover for his spy work.

Did you have a hard time convincing Lois to write any particular scenes for you?
I’ve begged for some steamy love scenes featuring Zack and me. I know Lois is capable of writing them. I’ve read her romances. But she keeps denying my request. She says it’s all about reader expectations and the differences between the romance genre and the mystery genre. In cozy and amateur sleuth mysteries readers are more interested in the solving of the mystery. They don’t want mushy love scenes getting in the way. So Zack and I are limited to the occasional passionate kiss before Lois slams the bedroom door. And she’s made it clear she’ll continue slamming that door.

What do you like to do when you are not being actively read somewhere?
Let’s see . . . I’m a single mom who’s been forced to take on moonlighting jobs to try to whittle down the debt my dead husband stuck me with. When I’m not working, I’m busy keeping my mother and my mother-in-law from killing each other. And then there are all those dead bodies Lois tosses in my path on a regular basis. I did have one short respite, though. In Mosaic Mayhem, Zack took me to Barcelona on one of his photo assignments, but I wound up getting kidnapped, so the vacation was a bit of a bust.

Bummer! Besides that particular plot, if you could rewrite anything in your books, what would it be?
I’d like my pre-Lois life back, but she rattled off something about the need for plot arcs and character goals, motivation, and conflict and said no one would be interested in reading about a protagonist with a boring, normal life.

Well, she does have a point. Tell the truth. What do you think of your fellow characters?
I love my sons, and I love Zack. And as much as she tries my patience, I love my mother—most days. But then there’s my mother-in-law Lucille. She would try the patience of a hundred saints. I understand one of Lois’s good friends keeps asking her to kill off Lucille, but Lois claims she’s the character readers love to hate. So I guess I’m stuck with her.

With the exception of our prima donna fashion editor (and what fashion editor isn’t a prima donna?) my coworkers are wonderful, especially food editor Cloris McWerther. Along with keeping my sweet tooth satisfied, she also saved my life once. I owe her big time. So I don’t hesitate to jump in and help when she finds herself in trouble in Scrapbook of Murder.

Do you have any secret aspirations that Lois doesn’t know about?
Not really. I’m not shy about letting her know how I feel and what I want. Unfortunately, she rarely listens to me.

If you had a free day with no responsibilities and your only mission was to enjoy yourself, what would you do?
What I wouldn’t give for a spa day! Ever since Dead Louse of a Spouse left me in debt up the yin-yang, I can barely afford a haircut once a year, let alone anything else.

What's the worst thing that's happened in your life? What did you learn from it?
That would be discovering my husband had a serious gambling addiction that he kept well hidden from me. When a man says, don’t worry, he’ll take care of everything—especially when it comes to money—don’t believe him. Trust but verify.

What are you most afraid of?
Winding up living in a cardboard box over a subway grate.

What’s Lois’s worst habit?
Given what she’s done to me? She’s obviously a sadist.

What aspect of her writing style do you like best?
Her ability to write humor. As bad as I have it, thanks to Lois imbuing me with a sense of humor, I’ve been able to survive everything she’s thrown at me—at least so far. Can you imagine what my life would be like if she’d decided to write a series of dark mysteries?

Horrors! If your story were a movie, who would play you?
Tina Fey, hands down. Publishers Weekly even compared me quite favorably to her Liz Lemon character from 30 Rock in their starred review of the first book in the series.

What makes you stand out from any other characters in your genre?
Most cozy and amateur sleuth mysteries feature small-town women from New England or down South. I’m a Jersey girl with a Jersey girl’s attitude. 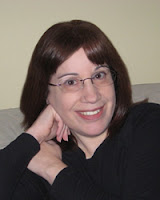 USA Today bestselling and award-winning author Lois Winston writes mystery, romance, romantic suspense, chick lit, women’s fiction, children’s chapter books, and nonfiction under her own name and her Emma Carlyle pen name. Kirkus Reviews dubbed her critically acclaimed Anastasia Pollack Crafting Mystery series, “North Jersey’s more mature answer to Stephanie Plum.” In addition, Lois is an award-winning craft and needlework designer who often draws much of her source material for both her characters and plots from her experiences in the crafts industry.