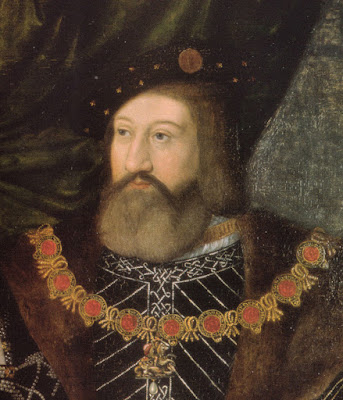 In my research for my book, Brandon Tudor Knight, there were no shortage of incidents and episodes which gave me an insight into his true character. I’d like to choose one involving Duchess Margaret of Savoy that’s well documented and suggests the strength of Brandon’s relationship with the king.
The young Henry VIII wanted to prove to his people that (unlike his father) he was a true warrior king, and – respond to the demands to ‘teach the French a lesson.’ In 1513 he chose Charles Brandon to lead the invading English army of some 30,000 men on an ambitious mission to France.
Brandon’s appointment as High Marshall was quite amazing considering his only previous military experience was a disastrous sea battle in the English Channel. The army had plenty of battle-hardened commanders, so although there were no doubt mutterings behind the king’s back, Henry’s choice shows the degree of trust he had in Brandon’s leadership ability.
The invasion of France went surprisingly well and after a short siege the city of Tournai surrendered on 24 September 1513.  It’s said that when the king was presented with the keys to the city he passed them to Brandon – quite an honour, as Charles had only been knighted in the March of that year.
There were several weeks of celebration after the victory, culminating with a grand banquet as guests of Margaret of Austria, Duchess of Savoy. Margaret was the daughter of Emperor Maximilian, the holy Roman Emperor, and King Henry’s great rival. Margaret was also wealthy, well-educated and powerful. Having been widowed twice, she’d sworn never to marry again, but Henry thought she would make the perfect partner for his best friend Charles Brandon.
There are various accounts of the story of how Brandon ‘proposed’ to her, but I like the one attributed to Margaret herself:
One night at Tournai, after the banquet he [Brandon] put himself upon his knees before me, and in speaking and him playing, he drew from my finger the ring and put it upon his, and since showed it to me; and I took to laugh, and to him said that he was a thief, and that I thought not that the king had with him led thieves out of his country.  I prayed him many times to give it [the ring] to me again for that it was too much known but he understood me not well and kept it until the next day that I spoke to the king, requiring to make him give it to me because it was too much known, I promising one of my bracelets the which I wore, the which I gave him, and then he gave me the said ring.
Brandon didn’t take the hint of course, and later at Lille it is reported that he once again knelt before the duchess and took another ring from her finger. Again, Margaret had to speak with Henry VIII, this time complaining not about the ring but of Brandon’s conduct, in stepping out of line - far beyond his status.
Henry was enjoying these games of Tudor ‘courtly love’ and, instead of ordering Brandon to return the ring, gave Margaret a more precious one set with diamonds. The incident caused in international scandal and of course infuriated Margaret’s father, Maximilian.
Years later Brandon sent his eldest daughter to the court of Margaret of Savoy - perhaps to learn something of how a woman could exercise power, or possibly in reconciliation for his earlier conduct.
Brandon enjoyed great favour from the king throughout his life, including protection from his many enemies within the English nobility, who called him a ‘stable boy’ (he was once Henry’s Master of the Horse).  Thomas Cromwell’s reforms to the royal household created the new position of Lord Great Master to oversee everything and Brandon was the first to hold this post.
He worked for Henry right up to the day he died, when the king said that in all their long friendship Charles Brandon had never knowingly betrayed a friend or taken advantage of an enemy. He is reported to have asked his council, ‘Is there any of you who can say as much?’
Tony Riches
Original link