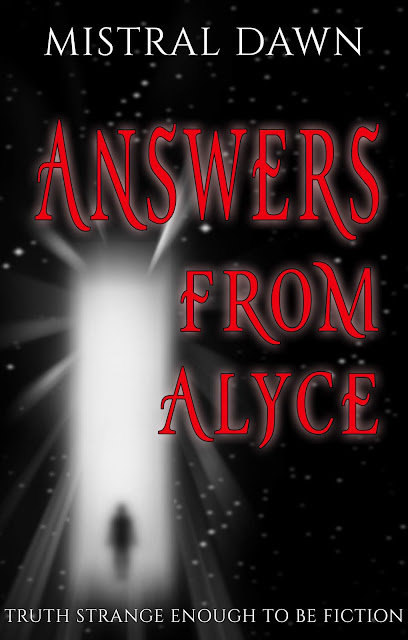 Excerpt from Answers From Alyce:
We walked over to a small kiosk where a laptop had been set up. On the screen, a browser was opened to an ISP's homepage and a menu of options was displayed.

"This is something we came across in your media. We weren't able to make sense of it, but it seems as though it likely falls under the umbrella of the absurd, so we just copied it and brought it here. We are hoping you'll be able to explain it so that we can better design an exhibit to highlight its illogicality."

I snorted. "Well, sugar, I guess this is one case where I can't argue with you. You're right, it definitely qualifies as absurd."

I looked at the screen again. I recognized it as one of the many warnings people had created for why the deregulation of the way ISPs were required to provide internet service would be such a disaster. Several popular websites and social media platforms were packaged in different bundles with prices listed underneath. The implication being that without the regulation, people would be forced to pay separately for all the content they consumed on the internet. But, the reality was, the damage caused by losing the net neutrality rules was much worse than that.

Gesturing at the screen, I said, "This is an ad that was put out by people who wanted to warn the public what would happen if the government removed regulations that required that all websites on the internet be treated equally and allowed internet service providers to give priority to websites that pay them more. This ad illustrated one possibility where customers might have to purchase access to different websites separately, rather than pay a single, flat fee for access to the whole internet. It's definitely a possibility that something like this might happen, but it's not the biggest concern when it comes to the loss of net neutrality protections."

"I apologize, but I'm still not certain what you're talking about," said Yax.

I sighed. "It gets a little technical; are you sure you want all the details?"

The big alien nodded. "Please. So that we can better understand the problem."

Rubbing my eyes, I rotated my shoulders, trying to loosen up the muscles. "Okay, let's see. I guess we'll have to start with how the internet was created. In the latter half of the last century, people who thought that the communications system in our country was too centralized, and so vulnerable to disruption, wanted to create a system that was decentralized and therefore more likely to remain functional in times of emergency. They started by creating small networks of computers that all used the same way of packaging data for transmission and then linking those networks together. And people in other countries were doing similar things. Eventually, over time, it grew into what became the internet that we have now; a worldwide network of computers with billions of websites containing all kinds of information. Internet service providers, called ISPs, are companies that allow people to connect their individual computers to the internet so that they can access all those websites."

"Obviously, this caused problems, so the government responded by reclassifying broadband internet as a 'common carrier', which essentially means that it's treated like a public utility instead of a luxury service. This allowed the government to institute net neutrality regulations that required ISPs to go back to treating all websites equally. Which is how the internet is supposed to work."

"Unfortunately, our country elected a corrupt would-be tyrant as our President, and he appointed someone who had been bribed by the ISPs to head the department of the government that was supposed to protect the internet. Instead of working for the American people, this person worked for the ISPs who had bribed him and ended the net neutrality regulations. Despite the fact that millions of citizens wrote, called, and protested publicly against such an action."

"But why would your President appoint someone who had been bribed by private industry to a government position charged with regulating that industry? Especially, if so many people were against such an action? Why would he want to make his own citizenry angry with him?" asked Squid-boy.

I shrugged. "Like I said, he's corrupt. The same corporations that bribed the person he appointed also bribed him. Plus, if all websites no longer have to be treated equally, that makes it a lot easier for him to control the information people have access to."

"And people who don't have access to all the facts are easy to control," observed Yax. "This is another example of the institutional corruption in your government that you told us about?"

I nodded. "Yep. And, like I said before, people having to pay extra to access all the sites they want isn't the worst thing that could happen. Some sites might not be accessible at all, if the people in power don't want them to be."

"Controlling access to information is the first step on the road to totalitarianism."