My grandfather was a simple man.
He was born in the countryside in the last years of the 19th century – and the Piedmontese countryside in the 19th century was not very different from the countryside in the 18th, 17th and 16th century. My grandfather’s first brush with the twentieth century was the Great War, in which he fought as part of the Mountain Artillery.
The shock was terrible, but he survived, and moved to Turin, the industrial hub of the country, to become a mechanic. He worked in a factory by day and attended a night school to get his certification as a professional mechanic.
When the Fascist Regime took power in Italy, soon my grandfather lost his job, because he refused to join the Party. He did some small freelance jobs as a mechanic and a general handyman, but during his free time, he sat down and read the whole encyclopedia, from cover to cover.
I don’t know what encyclopedia it was, what brand or edition or model or make. But my grandfather read it word by word.
Then he took to the mountains, because the Regime wanted him for deportation. He joined the partisans.
His nom de guerre was The Poor Man.
When the war ended the new government gave him six months of back pay as a corporal, and he went back to the factory – where he was assigned to broom duty, because he was a member of the Union.
Again he got a much needed second paycheck doing small repairs and general freelance mechanics work, and in his spare time he read the classics – I still have his copy of Don Quixote illustrated by Doré. He had subscribed to a line of high-quality classics published by Italy’s Comminist newspaper. The same newspaper he had distributed illegally during the Regime.

I thought about my grandfather, a few hours ago, as I asked my brother to get me a volume from an out of reach shelf in my library.
I was only going to check out a few facts, but first I spent about one hour browsing it, and then I decided I will go through it from cover to cover.
Like my grandfather, when he read the whole encyclopedia. 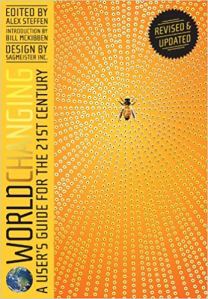 The book is called Worldchanging – A User’s Guide to the 21st Century, and is now almost a decade old. It is a concise and yet hefty volume on the changes our world is going through, and we are going through with the world.
The reasons for my decision are manifold.
Granted, I need the information distilled in the book’s 600 pages for a project I am working on at the moment (my Italian Patrons already know about it, the official public announcement will be on the first of September… I think).
But there is more.
I have been feeling restless these last few months.
I have slammed day after day into social network and live conversations in which rubbish rules supreme.
No rationality, no clearly stated facts, no data, nothing but propaganda and that tight little bundle of egoism, spite, fear and anger that awakens into each one of us when things are not going well.
And things are not going well, now.
It’s been painful, and frustrating, and overwhelming – because I love debating things, and there is nothing worse than someone barricaded behind his pile of prejudices and much-cherished ignorance.
So I felt the need not only to do something about it, but also the need to connect with my tribe – I need science, and debate, and constructive rational thinking. I need references and charts and a variety of informed opinions.
About what’s going on, what we can do, what’s next.
It’s like when you seek silence, or music, after a long day in a very noisy place.

So I’ll get me a book sign, and a comfy seat, and I’ll dedicate one solid hour every evening to reading Worldchanging from cover to cover.
During the day I’ll work on my projects, I’ll work to pay my bills.
In the evening, I’ll go home to my culture.
It will bring good things.