Crazy Country Living and a New Lease on Writing 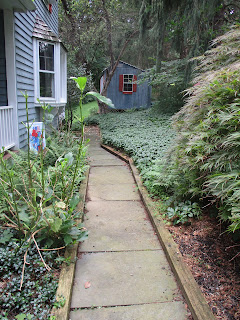 I've always dreamed of living in a more secluded area than the one in which I grew up. The yard I played in as a child was full of trees, many of which collapsed during hurricanes. The same was true of our neighbors' yards, and though living in the suburbs isn't exactly the same as living in the city, I still longed for that feeling of seclusion one can only get from being in a remote, wooded area. I've always written my best work when surrounded by beautiful scenery. To have it all around me, what excuse could I have not to write the best book possible?
When my husband and I started looking for a house, it came as no surprise to me that the ones capturing my attention were in rural neighborhoods, like the ones I'd always dreamed of living in.  We toured many, and lo and behold the one both of us liked best was on a hilltop, surrounded by very tall trees.  Not fenced-in, as the house of my childhood had been, this house had a definite rural appeal and I saw what I had been looking for in my heart for a long time. It was our home, and perhaps, the writing haven of my dreams. 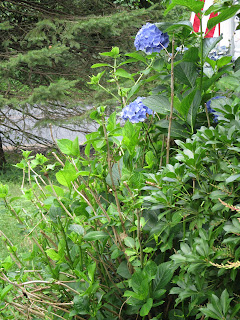 Country living required some adjustments. Originally built in the 1800's, our house came with a few flaws, not the least of which included some improperly sealed windows, which brought with them their share of insects. I'm used to the occasional insect, though I'd never actually seen a black bee before, nor did I have experience with insects who barely flinched at the presence of a human being, almost as though they've never seen one before. 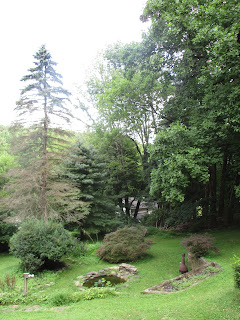 Cosmetic flaws and a couple of uninvited guests are one thing. But our first few weeks as homeowners only got more interesting from there. Determined to create a haven around our koi fish pond, my husband and I went to purchase some lawn chairs. Everything seemed to be going well until we got to the car and attempted to fit them inside. Though Bill tried every which way he could, the chairs did not fit. It was getting late, and we needed groceries for the next morning. Brave soul that he is, Bill volunteered to carry the chairs back to our house if I took his car to the supermarket. Seeing as how our town is on the small side, our local supermarket is in the next town over, on the opposite side of the highway, and has a tricky entrance turn-off. Though I'd yet to drive there successfully, I agreed to his suggestion, figuring it was our best and only option. Bill took off for the opposite side of the parking lot, heavy chairs in hand, only to have me yell out to him, twice, as I attempted to get his unfamiliar car to start.  Bill was later picked up by a truck driver, who offered to drive him the rest of the way to our house while I took several unintended detours as I attempted to find the supermarket. Though the store closed before I was able to get everything we needed, I did manage to get the essentials before I arrived back at home to find Bill waiting on the porch for me, without a key to the house. 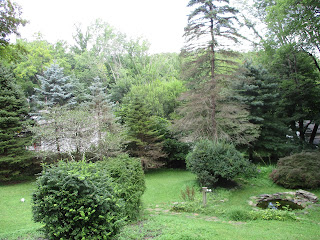 Fast forward a few weeks. Much more familiar with our new neighborhood, I decided to go for a walk into the more scenic section of town, where the roads become truly wooded. Bill had jogged the route a number of times, and so I believed I would be back at home within the hour.  I started out by waving to a neighbor who has a colorful, fenced-in garden on her front lawn. Continuing down the hill, I walked under a single-car lane underpass, leading me to the town river, and past a neighbor's pond. The road, or so I believed, was shaped like a U, so eventually I'd come to a part of it that was perpendicular to a familiar street, where I'd cross through and head for home. Only, in several attempts to do so, I lost track of where I was. As the scenery became prettier, I was consumed with two thoughts.  Perhaps we should have bought a home deeper into the woods, and, how in the world was I going to find my way back?
The further I walked, the prettier the scenery and the more anxious I became. Walking along a particular street, I saw almost nothing besides trees and they looked to be about a thousand feet tall. Though under any other circumstances, I would have been in Heaven, I was terrified, as it was getting darker and I still had no idea where I was. Thinking I'd only be gone a little while, I hadn't taken my phone along. I'd have to knock on someone's door or otherwise find my way home on my own. 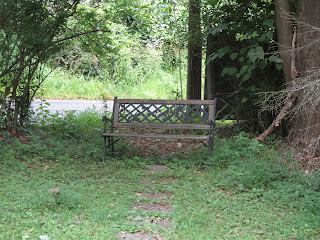 Determined to do the latter, I decided to keep going at least until it got dark. Though I didn't realize it at the time, I continued walking near the same road I'd started out on, and it was only taking me further and further away from our town. I saw deer, cows and even sheep, an animal I didn't even come across when we visited the Swiss Alps.  As I came to the end of the road, the sky grew completely dark and as cars whipped by me at what felt like a hundred miles an hour, I realized I had no choice but to ask for help. I knocked on the door of a woman who immediately offered me her phone, and then a ride home. I don't think Bill or I have ever been more relieved to see each other. 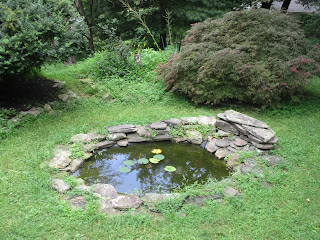 My wooded adventure could have turned me off to country living. Actually, it proved to me I made the right decision. Every change in life requires a period of adjustment. But my initial feelings and desires remain. Sitting in my backyard beside our pond, I feel inspired to write in a way I haven't in years. Though writers' block isn't in my vocabulary, I need certain things to make the magic happen. Nature. Beauty. Peace. Perhaps need is too strong of a word. But, they definitely make it better.
I know from experience I can write anywhere. I'm so grateful I no longer have to.
The Pinnacles of Power Series is now available as a box set!
Read all 5 stories for the price of 1! 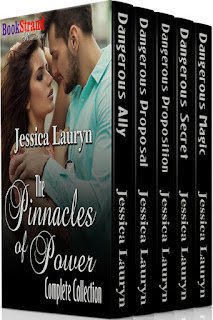 http://jessicalauryn.com/book/the-pinnacles-of-power-complete-collection/
Amidst diamond heists and deadly secrets, love still finds a way to take root. But with obstacles hiding around every corner, five couples will struggles will struggle against all odds to get what, and who they want.
In Dangerous Secret, Abigail MacKenzie is trying to get over her father's tragic death. But when a handsome stranger provides a clue about his killer, she becomes determined to get justice and she will face any danger, even if it comes from a man whose eyes cut straight through the walls around her heart.
In Dangerous Proposal, Alec Westwood is running from his past. After abandoning an assignment he couldn't bring himself to complete, Alec has attempted to start a new life. But when a beautiful woman crosses his path bearing the insignia for the organization that recruited him, he suspects his former boss may not be far behind. As he works to learn the truth behind Lena Benson's sudden appearance in North Conway, Alec fears his attraction to the enemy may be greater than all his strength and fortitude combined.
In Dangerous Proposition, Julia Dyson's father has been abducted and she suspects his illicit profession is to blame. Upon discovering a familiar name in her father's call history, she decides to confront the prime suspect, her teenage crush Colin Westwood. Though he refuses to admit to foul play, Colin agrees to take Julia to New York with him to find her missing father. But the passion that ignites between them is something neither of them are prepared for.
In Dangerous Ally, reporter Lilah Benson wants to write the story of a lifetime. She goes undercover working for the father of diamond smuggling kingpin Lucas Ramone but doesn't expect his son to be so charming..or seductive. Lucas Ramone is not about to let Project Gemstone be stolen out from under him. But when he meets his former fiance's enchanting younger sister he realizes Lilah Benson holds great power where he's concerned and fears she may be his undoing.
In Dangerous Magic, Corinne Johnson was separated from her children following a strange discovery in her husband's briefcase. She's attempting to rebuild her family, but when she has a steamy dream about her former coworker, Jack, her plans go up in flames. Wiccan Jack Madera is on a quest to find his biological father, and he didn't plan on running into Corinne. Drawn to the woman he's always shared a deep connection with, Jack casts a spell that takes the two of them down a path they never saw coming.