It’s the 11th of June, Robert E. Howard’s anniversary, and just 36 hours a go I did a post on my Italian blog about sword & sorcery, and mentioned Dark Agnes de Chastillon. And then yesterday, as we were recording our podcast, my friend Lucy and I talked briefly about Robert E. Howard’s women – because he did write a few very interesting women, and Dark Agnes was one of them.

I first met Dark Agnes de Chastillon, also known as Agnes de la Fere (a name that might ring a bell with those that have read Dumas) in the mid-80s. Having broken into the habit of reading in English, a whole world opened up for me, and I raided the shelves of the cheap paperbacks in the Sevagram bookstore. Some books I picked because of the author, others just because of the cover.
Sword Woman was perfect on both counts.

The slim Berkley paperback with the striking Ken Kelly cover collects the only two complete Dark Agnes stories – Sword Woman and Blades for France – plus the incomplete draft of a third story, Mistress of Death. The page-count was rounded up by throwing in two fragments of historical fantasy from Howard’s archives. 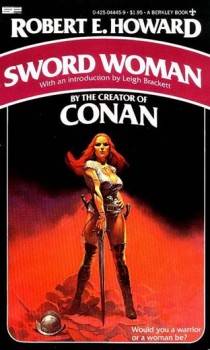 The first two stories are straightforward historical adventure, while in the third one the plot shifts towards fantasy, and Agnes loses some of her edge, and finds a smartass male “partner”. Apparently the readers feedback after the first two stories was none too positive – the readers did not like Dark Agnes, that is portrayed as a tough, smart woman that despite her harsh backstory can keep her cool and deal with her male counterparts without turning into a walking cliche. Such a woman was not welcome in the realm of historical fiction – and thus Howard toned her down and moved her to a fantasy setting.

But indeed, it is the original character that is impressive – narrated in the first person, the two complete stories show that Howard could write a believable, naturalistic female character that is fascinating and can carry a story on her own.

I was thoroughly fascinated with the Dark Agnes character and her adventures, so much so that I set out to translate the unfinished Mistress of Death to complete it on my own. I wonder whatever happened to those pages… the thing was pretty ugly, both as a translation and a “posthumous collaboration”, but it was all part of the learning process.

At his best, Howard was a superb writer, and when a character resonated with him, the result was always extraordinary. It is quite obvious that he liked a lot the historical version of Dark Agnes, and the two tales he wrote about her are fun, atmospheric and convincing. Sure, he plays fast and loose with the French language, but his history is reasonably sound, and his reconstruction of the horrors of the day-to-day life of a woman of the lower classes is rough and authentic. Agnes development, from runaway bride to mercenary soldier is believable, and we root for her all along her development.

Howard’s life was cut too short – I sometimes wonder what would have been of Agnes, had Howard been able to continue developing her as he best wished.