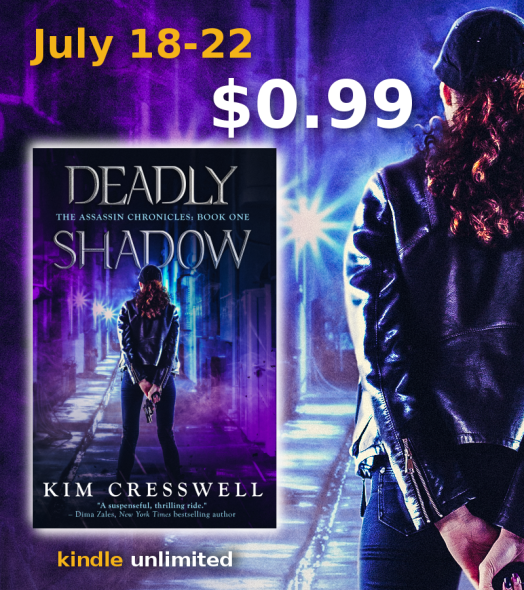 **FREE to read with Kindle Unlimited**

Amazon US: https://www.amazon.com/Deadly-Shadow-Paranormal-Suspense-Chronicles-ebook/dp/B07BX36QVV/
Amazon CA: https://www.amazon.ca/Deadly-Shadow-Paranormal-Suspense-Chronicles-ebook/dp/B07BX36QVV/
Amazon UK: https://www.amazon.co.uk/Deadly-Shadow-Paranormal-Suspense-Chronicles-ebook/dp/B07BX36QVV/
“Deadly Shadow takes you on a suspenseful, thrilling ride.” – Dima Zales, New York Times bestselling author
Two recent murders. Two serial killers. A conspiracy that reaches beyond the physical world.
Consumed with grief over the tragic death of her husband, FBI agent Victory McClane is obsessed with finding Ohio’s serial killer, “The Wrapper”.
When another young woman turns up dead and the victim is linked to Derrick Lynn, son of the Secretary of Defense, Victory finds Derrick has all the right answers and is a little too helpful.
Derrick has a secret: He’s a government assassin who uses his unusual paranormal skills to eliminate targets. Determined to keep his own secrets buried, he offers to help find The Wrapper.
But can Victory trust him?
As the body count rises, Victory must cross a dangerous line—into a world of government cover-ups, murder, and betrayal—a decision that will test her limits. And everything she believes in.
The Assassin Chronicles TV series is in development with Council Tree Productions.
Original link
Facebook Twitter LinkedIn Pinterest
How do you feel about this post?
Happy (0)
Love (0)
Surprised (0)
Sad (0)
Angry (0)
Adventures in the French Resistance
Some Meanings Behind Reading.