Two weeks ago, I wrote about our upcoming trip to Walt Disney World. This is a trip a year in the making, and yes, we will be going during the pandemic. Last time we went my husband and I did Disney Bounding (dressing in everyday clothing to portray a particular character).

And last time, we did also have a few custom shirts. But this was before I had my own Cricut which makes it easy to create your own custom shirts.

You can certainly buy lots of cute custom Disney shirts on Etsy. Or you can buy the designs and for a fraction of the price make your shirts. And if you are creative, you can even create your own designs.

Once again, I decided to make my own shirts for our Disney trip. I had seen a shirt with “When you wish upon a Death Star” – a play on the song from the Disney animatied movie Pinocchio. Originally, I was going to recreate the artwork but to save time, I spent $1.34 to buy this completed svg file. I tried it with this holographic vinyl (which on the roll appeared more blue than what it ended up looking like on the shirt) that I received last Christmas. I’m not sure I love the results so I will probably do the same design on a darker grey shirt but pick a vinyl doesn’t make the design so hard to read. I had purchased a two pack of scoop neck tees for $10.87 from Amazon so I already have a second shirt available. 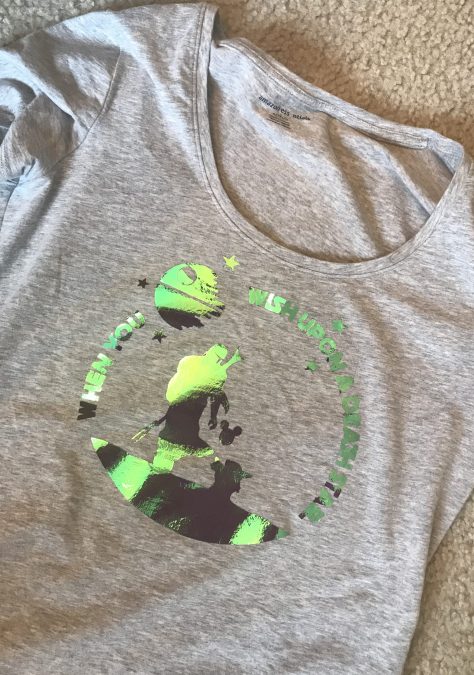 My husband then found this Star Wars design featuring Han Solo & Chewbacca. It cost me $3 on Etsy. With a light grey shirt from Target for $6, this shirt is far less exensive than the finished ones on Etsy.

Lexie loves Stitch and has a face mask with Stitch that says “Touch Me and I’ll Bite You.” She wanted a shirt with the same design. At first I thought I wouldn’t be able to pull this one off since I didn’t know how I would get Stitch to be in color. I bought her this cool performance V-neck shirt on Amazon ($7) as well t-shirt tranfer paper for dark shirts for my printer (Amazon $10.50 for 5 pages) and this SVG file from Etsy for $2.50. I printed the Stitch image from my Cricut and then had it cut out and was able to create this shirt. It is a little more expensive when you add in the transfer paper but I do have extra sheets for a future project and Lexie loves the shirt so it was worth it.

Now, I do have a grey shirt bought for Jase but he has yet to decide what he wants on his shirt. And to save time, I’ll probably buy that image too unless it is something I already have or perhaps just words.

But as I created these shirts, I did want to do something that was totally my own design. My husband had bought me a black V-neck shirt. I wanted a shirt that was Disney but not over-the-top Disney. I wanted something that I would be sure to wear again later as I am not typically one for wearing shirts with designs on them.

I created the design in Corel Draw and after finally perfecting the size of the stars and Mickey heads, this is what I came up with. I think it is my favorite of the lot.

I can’t wait to wear this on the plane as we fly to Orlando! It won’t be long – just 19 days until we leave!