Eloisa James fell in love with Paris and you will too. PARIS IN LOVE by Eloisa James only $1.99 #memoir #bestseller #romance 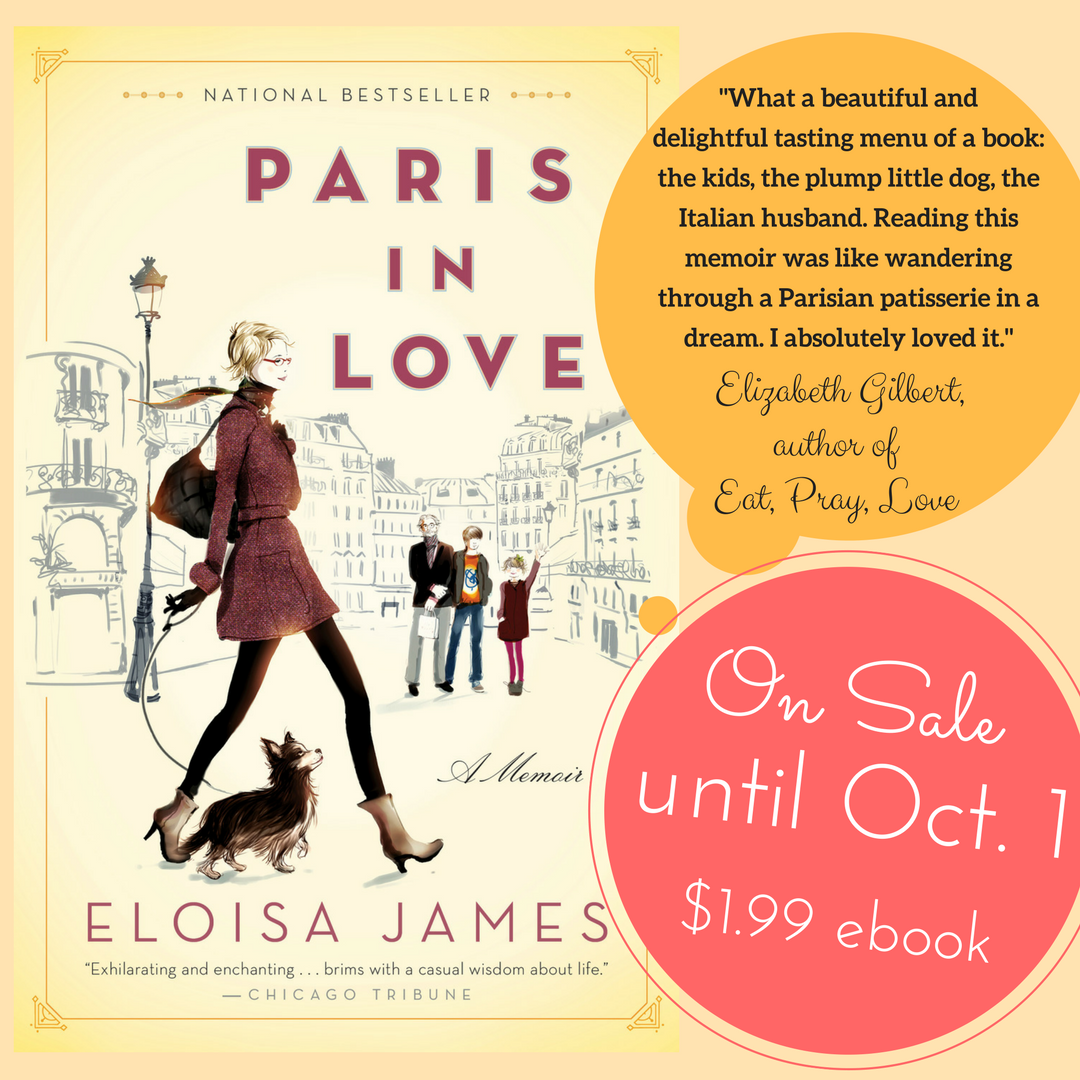 In 2009, New York Times bestselling author Eloisa James took a leap that many people dream about: She sold her house, took a sabbatical from her job as a Shakespeare professor, and moved her family to Paris. This memoir chronicles her joyful year in one of the most beautiful cities in the world. Eloisa revels in the ordinary pleasures of life—discovering corner museums that tourists overlook, chronicling Frenchwomen’s sartorial triumphs, walking from one end of Paris to another. She copes with her Italian husband’s notions of quality time; her two hilarious children, ages eleven and fifteen, as they navigate schools—not to mention puberty—in a foreign language; and her mother-in-law’s raised eyebrow in the kitchen (even as she overfeeds Milo, the family dog). Paris in Love invites the reader into the life of a most enchanting family, framed by la ville de l’amour.
Get it for only $1.99 from September 27 to October 1
WHERE YOU CAN BUY IT:
AMAZON
iBooks  https
Barnes and Noble

STELLAR REVIEWS:
“In this delightful charm-bracelet of a memoir, [Eloisa James shares] her adventures as an American suddenly immersed in all things French—food, clothes, joie de vivre.”—People

“Enchanting . . . gives the reader a sense of being immersed along with James in Paris for a year . . . you see the rain, taste the food, observe the people.”—USA Today
“This delectable confection, which includes recipes, is more than a visit to a glorious city: it is also a tour of a family, a marriage, and a love that has no borders. Très magnifique!”—Library Journal (starred review)

"What a beautiful and delightful tasting menu of a book: the kids, the plump little dog, the Italian husband. Reading this memoir was like wandering through a Parisian patisserie in a dream. I absolutely loved it." --Elizabeth Gilbert, author of Eat, Pray, Love
In this delightful charm-bracelet of a memoir, James, also the author of 20 romance novels, offers quirky, often laugh-out-loud funny snapshots of her adventures as an American suddenly immersed in all things French-food, clothes, joie de vivre. Her portrait of her family is equally lighthearted, and her reference guide is indispensable." --People magazine
"Paris in Love: A Memoir is a series of charming outtakes…including [Eloisa's] children's initial struggles and later triumphs in school, as well as her own increasingly bold forays into French-ness, from food and flea markets to embracing her femininity—where better than Paris to rediscover the pleasures of lingerie, post-mastectomy (and reconstructive surgery)? Along the way, James savors the moments of dissonance and satisfaction that come from the shared adventure of figuring out life in another country."--Vogue magazine
"Written with a dry sense of wit and an elegant sense of style, James' literary love letter to the City of Light is inspiring and insightful."
--Chicago Tribune

SNEAK PEEKS:
Alessandro came home from doing the shopping and said, "I was going to buy you flowers because of the argument we had yesterday." I looked at his empty hands. He shrugged. "There were too many to choose from."
Anna flung the door of the apartment open after school: "Mom! I was attacked today!"
"What happened?" I asked. "A girl named Domitilla slapped me!" Anna said, eyes open very wide. "She said I was screaming in her ear." We chose Anna's former school in New Jersey with an eye toward just this sort of encounter: they devoted a great deal of time to teaching the students to reject violence, studying Mohandas Gandhi and Martin Luther King, and practicing conflict resolution. I inquired hopefully how Anna responded to her first real taste of playground aggression. "I slapped her right back," my daughter explained. "My hand just rose in the air all by itself."
We are back from the country (and the two-week-Milo diet), so there was a ceremonial weighing of said stout Chihuahua this morning. He's lost a whole kilo (4.4) pounds, down from a high of 26 pounds. The vet advised a 4 kilo loss, but my mother-in-law is worried that being too thin will affect his digestion. He has the stature of a small but very sturdy Sherman tank.

WATCH A VIDEO EXCERPT TO THIS DELIGHTFUL MEMOIR (audio book narrated by Eloisa James)
https://youtu.be/P_rlAo3P_1s
Stay connected with Eloisa online: www.EloisaJames.com https://www.facebook.com/eloisajames https://twitter.com/EloisaJames https://www.tumblr.com/blog/eloisajames https://www.pinterest.com/eloisajames/ https://www.goodreads.com/EloisaJames
ABOUT ELOISA: A reviewer from USA Today wrote that she "found herself devouring [Eloisa's] book like a dieter with a Hershey bar"; People Magazine raved that "romance writing does not get much better than this." Eloisa wrote her first novel after graduating from Harvard, but alas, it was rejected by every possible publisher. After she got a couple more degrees and a job as a Shakespeare professor, she tried again, with much greater success. Over twenty best-sellers later, she teaches Shakespeare in the English Department at Fordham University in New York City. She's also the mother of two children and, in a particularly delicious irony for a romance writer, is married to a genuine Italian knight.