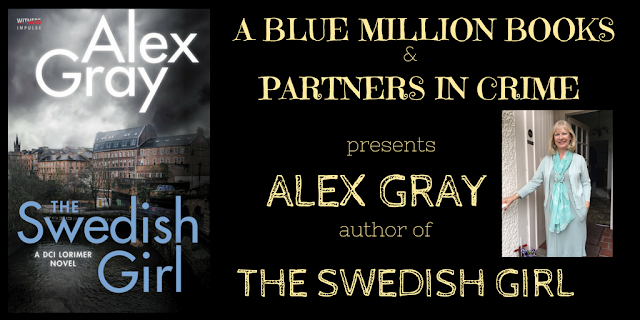 Another gripping Lorimer novel from Alex Gray, evoking Glasgow like no other writer can
When Kirsty Wilson lands a room in a luxury Glasgow flat owned by Swedish fellow student Eva Magnusson she can’t believe her luck. But Kirsty’s delight turns to terror when she finds the beautiful Swedish girl lying dead in their home and their male flatmate accused of her murder. Kirsty refuses to accept that he is guilty and, inspired by family friend Detective Superintendent Lorimer, sets out to clear his name.

Meanwhile, Lorimer calls on trusted psychologist Solly Brightman to help unravel the truth behind the enigmatic Eva’s life and death. But it is not long until another woman, bearing a marked resemblance to Eva, is brutally murdered. Horrified, Lorimer realises that Kirsty could be right. Is it possible that Glasgow’s finest detective has put the wrong man behind bars? And is there a cold-blooded killer out there orchestrating the death of the next innocent victim?

Touring with: Partners in Crime 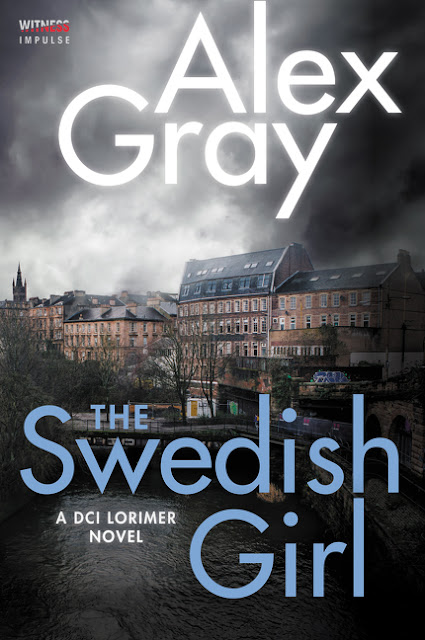 If I could go back to my younger self I would say, ‘Don’t worry about gazing at clouds!’

When I was little my teachers at school often had to bring me back from day dreaming, gazing out of the window. So many times I would be told that I had ‘ an overactive imagination’ as though that were somehow a fault that had to be corrected or a thing my elders wished I would grow out of. Now I would tell my younger self not to be fazed by such comments and to nurture that imagination as a gift from God.

The subject that caused me most heartache was arithmetic; all my family members seemed to find these arithmetical problems simple whereas they drive me to tears of frustration! I would tell my younger self not to worry as devices would be invented in time that would help me solve arithmetic puzzles!

The school I attended was fiercely competitive and my own lack of gaining subject prizes gave me a sense of repeated failure. It was only when I was at university and passing first in classes that I had any real sense of my own intelligence. I would go back to my younger self and tell me that achieving highest marks was less important than being kind and showing friendship to other children, something that tended to come naturally to a sensitive wee girl like me.

Being a writer was always part if who I was; one teacher at school recognised that when, aged eight, she told my parents that I would grow up to be an author. Many years later I was awarded a very special award by my old school for particular achievement in public life. I took that opportunity to tell the pupils not to worry about being first in class but to do their best, cultivate their individual talents and to cherish friendships. And, if they were so inclined, to gaze at clouds and try to see beyond them to a world where their imagination might grow into something real and special.

From Chapter 9
December
Kirsty turned the key in the door and closed it behind her with a sigh. The hall was in darkness and there was no sound coming from the living room. Her shoulders moved up and down in a shrug of resignation; she was alone in the flat again. Then she remembered. Wasn’t there some party that Eva had mentioned? They’d all be there, wouldn’t they? Pulling off her thin raincoat and hanging it on the old-fashioned wooden coat stand, Kirsty sauntered into the bedroom next to the front door, unbuttoning her jacket. It was fair handy having this big room to herself, especially when she was working late shift at the hotel. Nobody would be disturbed by her comings and goings. She took off her shoes and tossed her jacket, bag and mobile phone onto the bed. Oh, it was good to be home. A wee cup of hot chocolate and some of her own gingerbread would go down well, she thought, already imagining her teeth sinking into a thick slab of treacly cake.
She stopped for a moment, listening. There was a swish then a click as the front door opened and closed again. Then, nothing.
‘Colin? Is that you back already?’ Kirsty wandered out into the hall, her bare feet sinking into the pile of the hall carpet, still thick and soft despite all their winter boots tramping back and forth. Eva’s father had spared no expense in doing up this flat for his daughter and Kirsty Wilson was grateful for those small luxuries that were absent from most of her friends’ student flats.
Frowning slightly, Kirsty padded down the unlit corridor, one hand out ready to flick on the light switch as she reached the kitchen. But something made her turn left into the living room instead, just to see if anyone was at home after all.
At first she imagined the girl had fallen asleep, sprawled out in front of the television.
‘Eva?’
Kirsty moved forward and bent down, expecting the girl to sit up and yawn. One hand reached out to touch the back of her head but then she drew back as though guided by some inner instinct.
She stood up again and stepped around the recumbent figure, unaware that she was holding her breath.
Then, as Kirsty saw the expression in the dead girl’s eyes, the thin wail escaping from her open mouth turned into a scream of terror.
* * *
Detective Superintendent Lorimer crouched over the body, aware of the sounds of voices coming from the hall. The dead girl was lying on her back, one arm flung out, the fist curled tightly in the moment of death. Her head was bent to one side, blond hair partly obscuring her features, but Lorimer could see enough to make him wonder about the cause of death.
‘Manual strangulation?’ he asked, glancing up at the consultant pathologist who was kneeling on the other side of the girl’s body. The on-duty pathologist tonight was his friend, Dr Rosie Fergusson. He glanced at her with his usual admiration for her calm efficiency, knowing how different she could be at home as a doting mother and as the wife of Professor Brightman, an eminent psychologist and sometime criminal profiler who had worked with Lorimer in the past.
‘Looks like it,’ Rosie murmured, her gloved hands smoothing the hair from the victim’s face, letting Lorimer see for the first time what Kirsty Wilson had found earlier that night.
Eva Magnusson still had that ethereal quality in death that had captivated those who had gazed upon her: Lorimer saw the perfect oval face with flawless skin and bow-shaped lips that were slightly parted as though she had been taken by surprise. He watched as Rosie reached out to close the dead girl’s eyelids, seeing for the final time those pale blue Scandinavian eyes staring out at a world that had proved less than kind.
***
Excerpt from Swedish Girl by Alex Gray. Copyright © 2018 by Alex Gray. Reprinted by permission of Witness Impulse, an imprint of HarperCollins Publishers. All rights reserved. 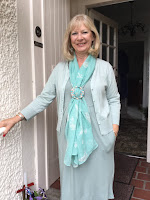 Alex Gray was born and educated in Glasgow. After studying English and Philosophy at the University of Strathclyde, she worked as a visiting officer for the Department of Health, a time she looks upon as postgraduate education since it proved a rich source of character studies. She then trained as a secondary school teacher of English. Alex began writing professionally in 1993 and had immediate success with short stories, articles, and commissions for BBC radio programs. She has been awarded the Scottish Association of Writers' Constable and Pitlochry trophies for her crime writing. A regular on the Scottish bestseller lists, she is the author of thirteen DCI Lorimer novels. She is the co-founder of the international Scottish crime writing festival, Bloody Scotland, which had its inaugural year in 2012.