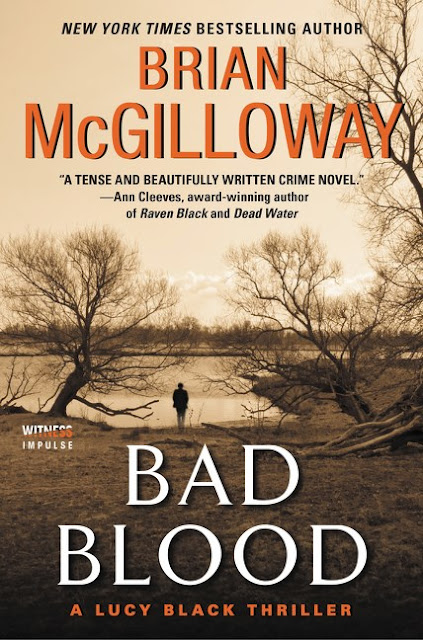 A young man is found in a riverside park, his head bashed in with a rock. The only clue to his identity is an admission stamp for the local gay club.

DS Lucy Black is called in to investigate. As Lucy delves into the community, tensions begin to rise as the man's death draws the attention of the local Gay Rights group to a hate-speech Pastor who, days earlier, had advocated the stoning of gay people and who refuses to retract his statement.  Things become further complicated with the emergence of a far right group targeting immigrants in a local working class estate. As their attacks escalate, Lucy and her boss, Tom Fleming, must also deal with the building power struggle between an old paramilitary commander and his deputy that threatens to further enflame an already volatile situation.

Hatred and complicity abound in the days leading up to the Brexit vote in McGilloway's new Lucy Black thriller. Compelling and current, Bad Blood is an expertly crafted and acutely observed page-turner, delivering the punch that readers of Little Girl Lost have grown to expect.

Brian, what inspired you to write Bad Blood?
The book began with an incident in Belfast where someone targeted a family of Romanian immigrants by writing ‘Romans Out’ on the wall of their house, seemingly unaware of the fact that Romans come from Rome. It marked one of a number of incidents which suggested a rising wave of right wing aggression which has been replicated elsewhere. In the two weeks after the Brexit vote in the UK, hate crime rose by 46%.  The reasons behind that – and Lucy’s attempt to hold those who enflamed it to justice – formed the heart of the book.

How did you come up with the title?
Titles can be tricky – my past two books had different names in the US than in the UK which caused all kinds of problems with people going to considerable effort to get what they thought was a new books only to discover they’d bought the same book twice. It wasn’t my choice at all, and it really bothered me – having someone read your book is such a privilege that you don’t want anyone to feel they’ve been tricked or to waste money on a book they’ve already read. I spent a long time finding a title for this one that would work for both publishers. The book is about resentment that can poison communities – whether neighborhoods or teams of colleagues or even families – so Bad Blood made sense.

Do you have another job outside of writing?
I teach English Literature full time to 11 – 18-year-olds, which is a lovely job to have. I love books and literature, so having two careers that allow me to spend time working with books and talking about them is great.

Do you outline or write by the seat of your pants?
A bit of both. I structure the books in terms of the days of an investigation so at any stage in the book I know generally what the key events are going to be in the current day I’m writing, but not so much where it will lead. That way I know where I’m going each time I sit down to write, but the process is as much a journey of discovery for me as I hope it will be for the reader.

What song would you pick to go with your book?
Great question. Each of my books tends to start with a piece of music – a tuning fork if you like that sets the tone for the novel. Hurt/Someone You Know was originally called Family Life after the Blue Nile song that was the tuning fork for that song. I found myself listening to a lot of Hans Zimmer and Max Richter while I was writing this one. Leonard Cohen’s "You Want it Darker" probably bled its way in there too.

What are your favorite books a) as a child b) as a teenager c) as an adult?
a) John Diamond, by Leon Garfield b) The Outsiders by SE Hinton c) Too many to name; Snow Falling on Cedars, The Name of the Rose, The Killing Kind, Last Car to Elysian Fields, Black and Blue . . .

What book are you currently reading and in what format?
Just finished Steve Cavanagh’s The Liar which is fantastic, and started Haylen Beck’s Here and Gone which is as wonderfully written and compulsive as I’d have expected. Both were proofs.

Name one thing you couldn’t live without.
My family. That’s an easy one.

If you could only keep one book, what would it be?
That’s a tricky one. A friend made me a leather-bound copy of my book the Nameless Dead which is just beautiful and has quite a bit of sentimental value for me. However, the book which I most re-read and love reading each time is probably The Great Gatsby, so I suspect I’d have to go with that.

Your last meal would be . . .
Irish stew, but only made the way that I make it myself with meatballs and the potatoes quartered so that you need to eat it with a spoon!

Would you rather work in a library or a bookstore?
There’s a great line in Tom Wait’s "Christmas Card from a Hooker" about the speaker buying a used car lot and never selling any of the cars – just driving a different one every day. That’s how I’d feel in a bookshop. Every time I walk into No Alibis in Belfast, I’m so envious of Dave Torrans the owner – and so in awe. I discovered my love of crime fiction there; it’s a very special place.

You won the lottery. What’s the first thing you would buy?
A house on Lake Garda in Italy. We’ve been a few times for holidays, and it’s just beautiful. And Italian ice cream is just the best!

Where’s home for you?
We live in Strabane, which is just on the Northern side of the Irish border. I grew up in Derry, which is about twenty minutes drive from here. I consider all of it home.

Is there anything in particular that you do to help the writing flow? Music? Acting out the scene? Long showers?
Music certainly, but generally just keeping plugging away at it. It doesn’t matter if what you write is useless; you can always revise it or scrap it in the rewrites, but at least you’re keeping the story moving forward.

What’s one of your favorite quotes?
"So we beat on, boats against the current, borne back ceaselessly into the past." From The Great Gatsby

What do you like to do when you’re not writing?
I love the cinema, so I go there as often as I can. There’s something about the ritual of going to the movies that is still kind of magical.

What are you working on now?
I’ve started a new Devlin novel after a 5 year break. I’m enjoying it so far . . .

The hall was already packed by the time Detective Inspector Tom Fleming arrived. The air was sweet with perfume and talc and, beneath that, from the farmers still wearing their work clothes, the scent of sweat and the smell of the earth.

The congregation were on their feet, being led in the opening hymn by Pastor James Nixon. Fleming smiled apologetically at those he squeezed past to get to a free seat in the third row from the back. The hymn finished, the assembly took their seats just as Fleming reached his, and settled to listen to the words of Pastor Nixon.

‘My brothers and sisters, it is a great honour to be here with you this evening and to see so many of you have taken the time to come and pray with me.’ His voice was strong despite his age, a rich baritone still carrying the inflections of his native Ballymena accent.

‘But it is a time of great challenge for us all. Daily, all good people face an assault on their morality with the rampant homosexual agenda that assails us and belittles everything we hold to be true and dear. Men of conscience are tried for refusing to make a cake celebrating homosexuality or print leaflets and posters furthering that agenda. And on the other side of the border, the Irish Republic has voted to allow homosexuals to marry, as if two women playing house is no different to the consummated union of a man and a woman. As if it is not a perversion which shames us all.

Nixon raised his hands, acknowledging their support. ‘There are those who would silence me, silence us. They tell us we must accept homosexuals in our town, our shops, allow homosexual bars and public houses to operate on our streets. We must allow sodomites to teach our children and to corrupt our young. We must stay silent while a new Gomorrah is built next to our homes and farms, our shops and schools. They say I am dangerous. They say I preach hatred. They say I should be silent. But I say this: I say that there is no danger in truth. I say that there is no hatred in goodness. And I say that I will not be silent.’

Another chorus of ‘Amens’ greeted his proclamation, accompanied by a smattering of applause which began at the front and rippled its way through the hall.

‘I will not stand idly by as our families are exposed to sin and depravity. I will not countenance the laws of the land being used to protect profane persons, allowing them to indulge their lustful practices, forcing those of us with consciences to humour this lifestyle. It is an abomination. The people who practise it are abominations and, like those before them, they will end in fire and brimstone.’

Fleming glanced around at the others in the congregation. While one or two shifted uncomfortably in their seats, for the most part the listeners sat intently waiting for Nixon to continue.

‘Friends, only last week, I read of an African nation – a heathen nation, a Godless nation – who arrested two men for homosexual acts. One of these men was sixteen. Sixteen! And do you know what they did to the pair of them? They stoned them. They took them out of the town and they threw rocks at them until the pair of them were dead. And do you know what I thought? Shall I tell you?’
An elderly lady in the front row called out ‘Yes,’ to the amusement of those around her. Nixon smiled mildly at her, as if indulging her.

‘Stoning was too good for those men. Every rock that struck them was a just reward for their sinfulness, their immorality, their ungodly behaviour. Every drop of their blood that stained the ground was a reminder that they deserved to die. It was the wages of their sin!’ 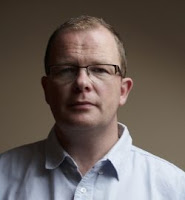 Brian McGilloway was born in Derry, Northern Ireland. After studying English at Queen’s University, Belfast, he took up a teaching position in St Columb’s College in Derry, where he was Head of English. He is the author of the New York Times bestselling Lucy Black series, all to be published by Witness. Brian lives near the Irish borderlands with his wife and their four children.