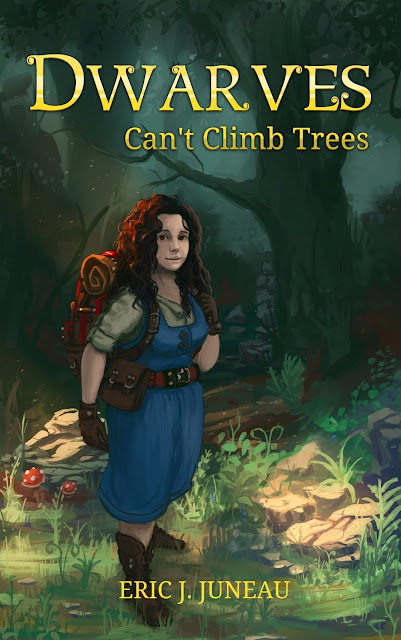 Dwarves are stout, stubborn folk meant for mountains. They have no place in the forest. It's full of icy rivers, beasts of prey, and bandits. So why are Vala and her friends hiking straight into it?
Though it vexes Vala, the only way to not spend the rest of her life farming is to marry well.  So she'll join the other dwarven girls on the migration to the sacred glen, where they must take a husband or be doomed to spinsterhood.

But how can she and her friends stand out if the upper class dwarves are going to arrive earlier and make a first impression?  Their only choice is to hike through the unmapped, untamed forest.

Determined Vala, sassy Darcelle, meek Tarni, and stoic Runia.  Lifelong friends who discover they have less to fear from the forest than the harsh truths about each other.  Which will end first -- their friendship or their lives?

LOVE IT OR LEAVE IT INTERVIEW WITH ERIC JUNEAU

A few of your favorite things:
My iPod - it's my little distract-o-matic
My Kindle - it has all the books I ever want or ever need. Even comic books. I don't use it nearly enough to its full potential.
My stuffed seal, Skruffy. I've had it since I was eight. It was a gift from my uncle who was in the Air Force, stationed in Guam. It was the last Christmas gift I got from him as he died in a plane crash two months later.
Things you need to throw out:
My iPod - it's my little distract-o-matic (okay, I shouldn't really throw it out. Maybe just some of the apps on it.)
I have a black leather trench coat I bought during my "trench coat messiah" period twelve years ago that I never wore. It's in the back of my closet collecting dust.
That tub of ice cream I keep buying from the grocery store.

Things you need in order to write:
A computer with either Word or OpenOffice. (I just bought Scrivener so I don't know if I need that yet).
A thesaurus, preferably online so it's easily searchable.
A period of time where I don't have to worry about interruptions.
Things that hamper your writing:
Interruptions, depression or not getting enough sleep, the existential meaningless of existence .

Things you love about writing:
Creating totally new worlds and funny characters I'd want to hang out with.
Playing with action figures while still being adult about it.
Creating a thing where there wasn't a thing before.
Things you hate about writing:
Not knowing how it's going until you're finished, and that can take a long time.
Not getting much feedback after you're done, like no one's read it.
The length of time it takes from start to finish.

Hardest thing about being a writer:
You can find the time to write each day, but sometimes, especially if you're not well-established yet, it gets hard to motivate yourself to do it, because you've had so many rejections already. Also, staying off the Internet.
Easiest thing about being a writer:
All you have to do is sit down and do the typey-typey. It's not like hauling logs or mining coal.

Things you never want to run out of:
Electricity, wireless connectivity.
Things you wish you’d never bought:
All these DVDs. I rarely watch them, and I especially never watch the special features or commentary (I'd rather hear from the scriptwriter than the director). And there's too many good, new things on Netflix.

Favorite music:
90s alternative. I've become one of those fuddy-duddys who hates music today by these self-entitled twit children, and music was better back in my day when it was deep and heavy
Music that make your ears bleed:
Lots of hip-hop, including gangsta rap, schmaltzy R&B, southern rap.

Favorite beverage:
Lemonade, Mountain Dew Code Red. Do milkshakes count? Is it a beverage if you can eat it with a spoon? Does that make soup a beverage?
Something that gives you a pickle face:
Mineral water. If you're going to carbonate something, put flavor into it.
IPAs. I like bitter things, like mustard and sauerkraut. But for some reason IPA beers taste like a oil refinery chemical someone made palatable

Favorite smell:
Burning wood, coffee, a clean house.
Something that makes you hold your nose:
Baby food. Smells so processed and aged and icky. I hate seeing it too. It's hard for me to eat when babies are eating nearby. Also vomit.

People you consider as heroes:
Teachers, daycare providers.
People with a big L on their foreheads:
People who use money or prestige to avoid the law or consequences of punishment.
People who dedicate large swaths of time and energy to trolling or hatemongering just because they can and it's easy.

Last best thing you ate:
A spicy peanut pad thai thing that I made with spare asian noodles.
Last thing you regret eating:
A big old cinnamon roll AND a cream-filled donut at work. If they're going to provide food couldn't they make it a little less fatty sometimes?

Things you’d walk a mile for:
A mile isn't that long. I can walk a mile in half an hour. So I'll say cream puffs.
Things that make you want to run screaming from the room:
A bunch of people all looking at me.

Things you always put in your books:
Something fantastic. Life is too short for the mundanity of real life, I don't need it in my books.
Some sort of reference to my wife, just because it's fun and I can see if she caught it.
Examination of gender issues
Themes of duality (which blends to the gender issues, specifically woman and man).
The word "just" too many times.
Things you never put in your books:
Intentional symbolism
Lovey stuff
Whimsy

Things to say to an author:
"I loved your book. It made me change my mind about such-n-such."
Things to say to an author if you want to be fictionally killed off in their next book:
Something that demonstrates ignorance and ESPECIALLY if you have desire to overcome that ignorance (i.e., being stubborn on an issue or belief).
"When are you going to write about [topic or genre I have no interest in]?"

Favorite places you’ve been:
Cancun, Mexico - I just remember lots of tasty drinks.
Big Sky, Montana - something about the isolation and snow and ski culture.
Places you never want to go to again:
San Francisco - dirty, full of homeless people

Favorite books or genre:
Science fiction, fantasy, coming of age, humor, romance
The Perks of Being a Wallflower by Stephen Chbosky
Darkness of the Light by Peter David
The Astonishing Adventures of Fanboy and Goth Girl by Barry Lyga
Ready Player One by Ernest Cline
Harry Potter and the Deathly Hallows by J.K. Rowling
Books you would ban:
Never. Even the worst books have something to give, even if it's what "not" to do. I never worry about books corrupting anyone. I worry that they're not providing ideas.

Things that make you happy:
My daughters, cats, Disney princesses, Muppets, robots.
Things that drive you crazy:
People driving badly on the road, especially during my commute.

Biggest lie you’ve ever told:
When I was dating my wife in college, I lied to her that I had to do homework, when I was playing video games, just to get a moment's peace.
A lie you wish you’d told:
|I wish I told my sister that she knew what she was talking about regarding my opinions about certain suburban moms. She went to school in Chicago, now lives in Vermont, spent two years in Nepal, and will now be taking a permanent job in Alaska. She has never been married and never lived in suburbia. But the argument we had online, I spent way too much energy and time on. We haven't really spoken to each other since then.

The last thing you did for the first time:
I went to the March for Science, my first protest march and political activism, in Minneapolis. I wrote about it here: http://author-quest.blogspot.com/2017/04/the-march-for-science-write-up.html
Something you’ll never do again:
Keep it to myself when I feel sick or icky. I tried to "be a man" about this headache I had that wouldn't go away. It turned out to be meningitis, and I had to be rushed to the hospital. 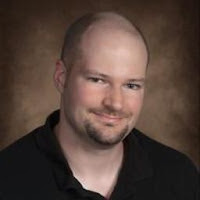 Eric Juneau is a software engineer who lives in Minnesota with his wife and two daughters. His stories have been published in Electric Spec and Plasma Frequency. His first novel, Merm-8, was published in Summer 2016 by eTreasures. You can find him talking about movies, video games, and Disney princesses in his journey to become a capital A Author at http://author-quest.blogspot.com.