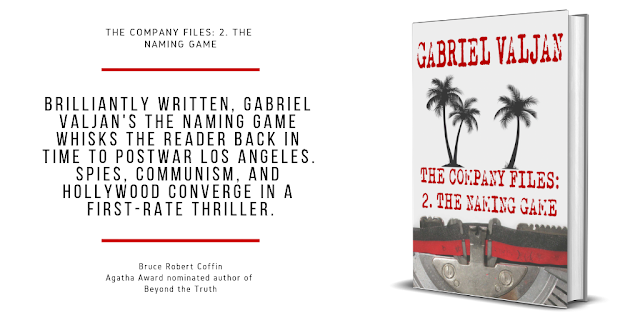 Whether it’s Hollywood or DC, life and death, success or failure hinge on saying a name.

When Charlie Loew is found murdered in a seedy flophouse with a cryptic list inside the dead script-fixer’s handkerchief, Jack Marshall sends Walker undercover as a screenwriter at a major studio and Leslie as a secretary to Dr. Phillip Ernest, shrink to the stars. J. Edgar Hoover has his own list. Blacklisted writers and studio politics. Ruthless gangsters and Chief Parker’s LAPD. Paranoia, suspicions, and divided loyalties begin to blur when the House Un-American Activities Committee insists that everyone play the naming game.

On tour with: Partners in Crime Book Tours 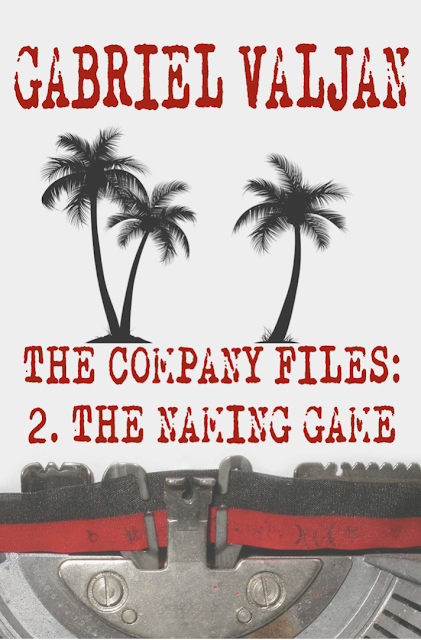 If you could talk to someone (dead), who would it be and what would you ask them?
It’d have to be the actress Carole Lombard, whom I adore and admire. She was called ‘The Profane Angel’ because she’d let fly profanities and yet be hilarious at the same time. She helped a lot of people during the Depression, especially those close to her without any of them ever knowing that she was paying their bills. I think I’d just bask in her company, observe her, and ask her about her sense of timing, which is everything in comedy.

If you could live in any time period which would it be?
I think the Roaring Twenties would be interesting. Not so much for Prohibition and speakeasies, but rather to experience the edginess of the era. Experimental art, music, and fashion. Art Deco architecture. Women were involved in progressive causes and yet were also carefree and sexual, and sometimes androgynous. Hemlines migrated north of the knees. People moved to the city and people had discretionary income. There was a recklessness in the air as a reaction to the horrors of World War I.

If you could step back into a moment or day in time, where would you go?
I’d like to experience a day on the set of a major Hollywood studio in the Thirties. I love films from that period because dialogue was witty, often double-edged and satirical. Have a looksee at any of the movies from The Marx Brothers, or one of Lombard’s screwball comedies.

Her most popular film My Man Godfrey is an indictment of class distinctions and indifference that the wealthy had for the Have-Nots. You can see the same criticism in Holiday, a film with Cary Grant and Katharine Hepburn. The film is a remake of an earlier film and it is based on a Philip Barry play. Carole Lombard’s last film, To Be or Not to Be, which was released posthumously, is about an acting troupe putting on a play called Gestapo for Nazis in Warsaw. Pretty daring stuff to put in front of an audience and sneak past the censors.

If you could be anything besides a writer, what would it be?
A veterinarian because I love animals. Let’s face it: you have to really know your stuff because the patient can’t talk.

If you could meet any author for coffee, who would you like to meet and what would you talk about?
This is really a tough question. My biggest fear with meeting someone I admire on the page is that they turn out to be a real jerk. The French poet Rimbaud, for example, used to lace food for his guests with arsenic, just to see how they’d react. Truman Capote was vicious and verbally abusive. Raymond Chandler was known to be prissy and petty. I’ve been fortunate to have met authors who were both kind and generous, who listened and treated me with kindness. Sara Paretsky. Hank Phillippi Ryan. Megan Abbott. Louise Penny. The late Elie Wiesel and Geoffrey Hill.

5 favorite possessions
1.    A Carole Lombard autograph I own and yes, it is authentic.
2.    A congratulatory letter from the writer Herman Wouk on one of my short stories.
3.    Kind words from Elie Wiesel in my copies of his Night and Twilight.
4.    An unpublished letter written by Flaubert, where he mentions Salammbô.
and
5.    Sara Paretsky signed my copy of Hardball.

5 things you need in order to write:
1.    A computer is a must. I dislike my handwriting, and often can’t decipher it.
2.    A quiet place. I can tune things out, but I’d prefer silence.
3.    A room. I need space to pace because I walk and talk to myself. Another reason, I prefer solitude is most people might think I was nuts. I act out my dialogue.
4.    A small notebook to pencil in an idea or a phrase. Sometimes I send myself an email, if I don’t have pen and paper.
and
5.    Coffee in the morning and cold water to drink throughout the day.

5 things you love about writing:
1.    Learning what I think/feel about ‘something.’
2.    When a character or a plot takes an unexpected turn.
3.    Sense of pride when I see my name in print.
4.    When a reader tells me they have enjoyed my story/novel.
and
5.    A sense of accomplishment that comes with typing The End.

5 things about you or 5 words to describe you:
1.    Organized. Calm the chaos and start somewhere, anywhere, but start.
2.    Observant. I enjoy watching people, noticing their body language and how they talk to each other. You can learn a lot about human nature by sitting and watching people.
3.    Empathetic. I feel all my emotions intensely, though I’m good at hiding them.
These three are essential for a writer.
4.    Kind. I like helping people.
and
5.    Drive. I’m a goal-oriented person. If I say I’ll do something, it will get done.

5 things that drive you crazy:
1.    People who walk without looking where they’re going because they’re so preoccupied with their cell phone.
2.    People who insist on talking LOUDLY on their phone in public. I really don’t want or need to hear you.
3.    When someone insists that they have to be first through the door, on line.
4.    People who demand preferential treatment because they think (or believe) they are superior to everyone else.
and
5.    Condescending people. I’ve seen many instances where a person made assumptions about another person’s education, income, occupation, or political or sexual orientation. Never assume you know a person, or their journey in life.

What are some things that very few people know about you?
1.    I can shoot, throw, and write well with both hands.
2.    English was not my first language and I’m hearing-impaired, so I’m self-conscious about my grammar and how I pronounce words. A gun to my head and I can’t spell ‘rhythm’ without Spell-check. I wear hearing aids.
3.    Being hearing-impaired has made me reliant on observation and reading lips. I guess I should’ve added that pet peeve: when people don’t look at me every once in a while, during a conversation. They look up, down, and away. Drives me nuts because I work very hard to understand what people are saying; it’s the worst when they mumble. For years, people assumed I was arrogant or stuck-up because I was a) quiet or b) didn’t answer them, only to realize that I was neither. If I didn’t answer them, it was because I didn’t hear them. I can’t, for instance, hear anything behind me.
4.    Another quick fact about me is that I can’t talk for very long because only one of my vocal cords works, and my voice becomes gravelly when I talk for too ling. Think of the actor Jason Beghe (Voight on Chicago PD). I sound like him.
5.    I’ve worked as an applications engineer, as an RN, and I’ve competed in several triathlons.

What’s your favorite time of day?
Early morning. Nothing beats getting things done before 9am.

What’s your favorite quote?
“Forgiveness is the fragrance the violet sheds on the heel that has crushed it.” —Mark Twain (quoting an asylum inmate)

OTHER BOOKS BY GABRIEL VALJAN

The Company Files: 1. The Good Man 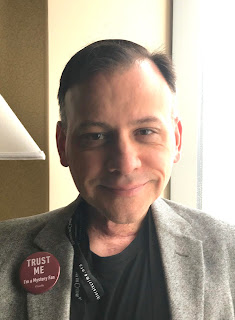 Gabriel Valjan is the author The Company Files and the Roma Series with Winter Goose Publishing. His stories have appeared in numerous publications, including several Level Best anthologies. He has been short-listed for the Fish Prize in Ireland, the Bridport Prize in England. His novella, Monday’s Mirage, won an Honorable Mention for the Nero Wolfe Black Orchid Novella Prize. Gabriel is a lifetime member of Sisters in Crime and you can find him at Bouchercon and Malice Domestic. He enjoys the local restaurants in his corner of Boston’s South End.