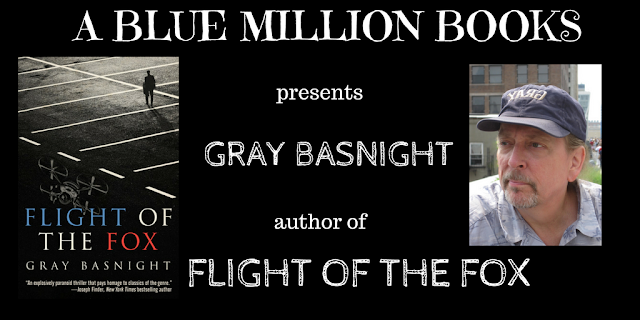 An innocent math professor runs for his life as teams of hitmen try to prevent publication of their government’s dark history.

College professor Sam Teagarden stumbles upon a decades-old government cover-up when an encoded document mysteriously lands in his in-box, followed by a cluster of mini-drones programmed to kill him.

That begins a terrifying flight from upstate New York, to Washington, to Key West as Teagarden must outfox teams of hitmen equipped with highly sophisticated technology. While a fugitive, he races to decode the document, only to realize the dreadful truth—it’s the reason he’s being hunted because it details criminal acts committed by the U.S. in the 20th Century.

If he survives and publishes the decoded document, he’ll be a heroic whistle blower. But there is no guarantee. He may also end up dead.

Title: Flight of the Fox 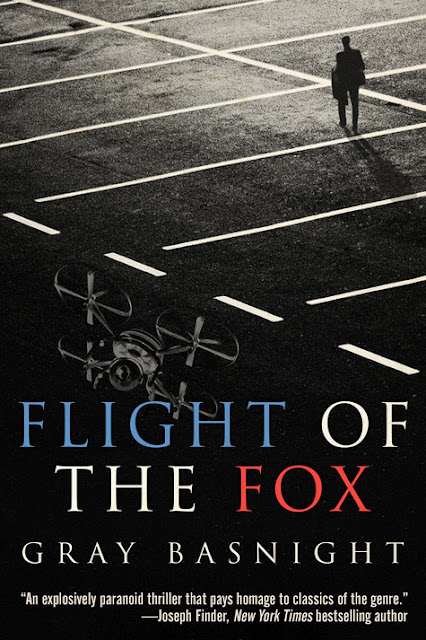 LOVE IT OR LEAVE IT WITH GRAY BASNIGHT

A few of your favorite things: Playing with my dog, reading, writing, eating, traveling (especially by train), sitting on a porch during sunset.
Things you need to throw out: Anything made of plastic.

Things you need in order to write: A PC or laptop.  (The best thing about computers is the backspace key because I’m a lousy typist.)
Things that hamper your writing: Interruptions both external and internal.

Things you love about writing: The best thing is when it goes well. A good writing session is what I imagine it must be like to have a good work shift as a brick layer. To be able to look back and see the bricks or stones taking shape must be a satisfying sense of accomplishment.
Things you hate about writing: The worst is when it goes poorly. But I’ve learned that on those days you need to stay in the chair. Keep staring at the screen. Okay, get up to water the plants or walk the dog. But returning to the chair is a must. At the very least, the bad days allow you to know there’s a real problem and where. Afterward, both the conscious and subconscious mind will be working that problem. Sometimes the solution comes while falling asleep (keep pen and paper next to the bed) or the next morning in the shower.

Easiest thing about being a writer:  Nothing is really easy about the creative end of writing. It’s debatable as to who first said one of the all-time great quotes about writing, that goes something like this: “Writing is easy, all you have to do is sit down at the keyboard and slice open a vein.” Once a contract is signed, I enjoy working with a good copyeditor who’s dedicated to working in tandem to improve the manuscript. For most of us, that give and take is a vital part of the product.
Hardest thing about being a writer: There isn’t any one thing. It’s all difficult and frustrating. But one ever-present roadblock tends to be the business end of writing where agents, editors and publishing houses are increasingly more selective as the industry evolves through tectonic changes.  It’s perfectly understandable that fewer titles receive attention from the big houses, but that doesn’t make it less bumpy for both published and aspiring writers.

Things you love about where you live: In New York City, I love that all eight million of us are in the vortex together, yet at the same time we can all be alone within the crowd.
Things that make you want to move: Parking tickets.

Things you never want to run out of: Coffee.
Things you wish you’d never bought: My last donut.

People you consider as heroes: My only true heroes are public school teachers.
People with a big L on their foreheads: This is really gross I know, but I can’t stand it when people talk with their mouth full of food or have other equally disgusting table manners. It’s weirdly ironic, but famous chefs and other foodies are some of the worst offenders.

Favorite books: Robinson Caruso, Moll Flanders, Around the World in Eighty Days, War of the Worlds, The Sun Also Rises, Intruder in the Dust, Shadows in Paradise, In Cold Blood, Travels with my Aunt.
Books you would ban: None/never.

Things that make you happy: Laughter, seeing animals in the wild, a good book.
Things that drive you crazy: Technology that doesn’t work properly makes me want to move to Tibet and live in a cave. The old joke that you need a 12-year-old to fix the glitch really doesn’t apply any longer. Everything interfacing with everything else makes it all so complicated and mysterious.   Much of the time the cable guy and the clerk in the phone store haven’t a clue how to fix the issues.   And sometimes they make it worse.

EXCERPT FROM FLIGHT OF THE FOX

He knew the pages would be historic if made public.  It would be a mean revelation that many would prefer to leave hidden, to keep the past cloaked in beguiling innocence.

He opened the sliding glass door just wide enough to slip out.  Once outside, he stooped low and pushed it closed with a foot.

Crouching low, there was a strong smell of freshly cut grass and store bought chemical fertilizer.  He moved slowly, going as easy on his still-healing knees as he could while maneuvering down the embankment of the neighboring yard, Ernest Blair’s yard.  He paused every few feet, cocking his head, first to one side, then the other, listening for any sound that might be out of place with the night.  The most prominent noise was the lapping of tiny waves at the shore’s edge caused by a light breeze.  Beyond that, the night was still. 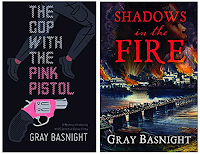 OTHER BOOKS BY GRAY: 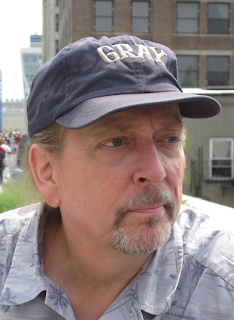 Gray Basnight worked for three decades in New York City as a radio and television news producer, writer, editor, reporter, and newscaster.  He lives in New York with his wife and golden retriever, where he is grateful to be dedicated to his lifelong passion of writing.

Basnight’s novels and works-in-progress cross several genres, including crime, historical, YA, and literary fiction. At the moment, he’s available for readings and interviews for his run-for-you-life thriller Flight of the Fox.