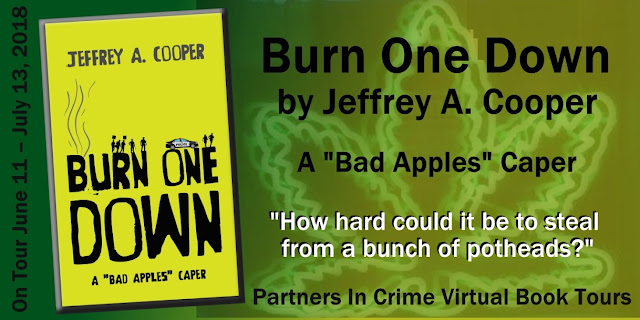 Career thief Jack Apple is offered a low-risk, six figure payout to heist a medical marijuana dispensary from the feisty and impetuous Diane Thomas after Diane steals the robbery plans from her shady ex-husband Alvin, hoping to beat him to the score.

Diane promises to stay out of Jack’s way but can’t help interfering, forcing them to take hostages inside the dispensary when the robbery is interrupted, inciting a media circus that deteriorates into a full-on urban riot.

To escape, Jack and Diane must negotiate the hostages, their agendas, law enforcement, the news media, crooked deals, corrupt politicians, rioters, Diane’s shady ex-husband, the business partners they didn’t know they had, and their growing attraction to each other.

Title: Burn One Down 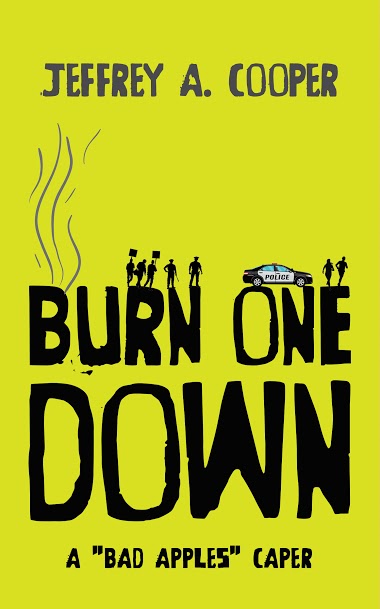 LOVE IT OR LEAVE IT INTERVIEW WITH JEFFREY COOPER


A few of your favorite things: My family, laughter, peanut butter & jelly sandwiches, avoiding traffic.
Things you need to throw out:  My dream to be an underwear model.

Things you need in order to write: Time. Desire. Coffee. Thick Skin. Duct Tape.
Things that hamper your writing: The job that pays the rent.

Things you love about writing: You know those times when you think of the perfect comeback five minutes after you really needed it? I finally have something to do with all of those.
Things you hate about writing: Semicolons. They think they’re so cool.

Things you love about where you live: There’s a lot to be said for seeing the sun every day.
Things that make you want to move: The knuckle-dragger who followed the UPS guy and stole the box of books I had just ordered off my front porch. Something tells me he’s not a reader.

Things you never want to run out of: Hope. Gratitude. Toilet paper.
Things you wish you’d never bought:  In 1977, I bought my dad an 8-track tape entitled, “How to C.B.”, effectively killing off two fads with one Christmas gift.

People you consider as heroes:  Anyone who serves our country, in both war and peace. Military, police, fire, EMT’s. Teachers. Doctors. Parents. Neighbors. Friends. Those who fight for others, and anyone that struggles for basic human dignity.
People with a big L on their foreheads:  Anyone who is proudly ignorant, willfully stupid, blindly racist, or who wears a man bun. And stop littering my planet, you slobs. It’s not the earth’s fault you suck.

Things you’d walk a mile for:  A Primanti Brothers sandwich. A gas station. Pretty much anything of value. A mile isn’t far, except in Los Angeles. People here would drive to the bathroom if they could. At 85 mph.
Things that make you want to run screaming from the room:  When my hair catches on fire. “The meteor is about to hit Tujunga.” Ladies and gentlemen . . . Coldplay.

Things to say to an author: Is it okay if fifty of my friends review your book on Amazon and Goodreads? What can I do with this twenty million dollars? Got any ideas?
If those don’t work, “I enjoyed your book, Wordsmith,” is just fine.
Things to say to an author if you want to be fictionally killed off in their next book:  You wrote a book?  That’s great, I love to color.  I haven’t read a book since high school! (Especially when it’s said proudly.)  I’m the guy who stole that box of books off your front porch. (Shakes fist.)

Favorite places you’ve been:  New Zealand. Australia. Mexico. Third row, center stage at a Rush concert in 1989.
Places you never want to go to again:  (Unnamed), a Los Angeles area chicken restaurant. I was in the bathroom so long after eating there, I got my mail forwarded.  The annual (unnamed) sun-tan lotion beauty contest for children, held in our local airport hotel ballroom. My darkest hour as a parent.The L.A. Memorial Coliseum.

People you’d like to invite to dinner:  Carl Reiner. Banksy. Bob Dylan. Buzz Aldrin. We better have this dinner soon.
People you’d cancel dinner on:  Anyone who suggested Ethopian food. Sorry. It looks like it’s been through someone already.


EXCERPT FROM BURN ONE DOWN 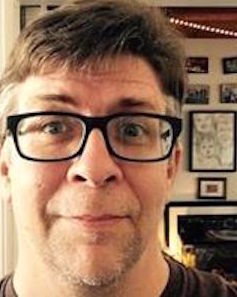 Jeffrey A. Cooper’s first novel, How to Steal a Truck Full of Nickels was published in September, 2015 to stellar reviews, where it justifiably died a quick death. His feature film script, Better Man was a finalist in the Page International Screenwriting Awards competition that same year. Jeffrey co-created two television pilots executive produced by Emmy-award winning comedian Louie Anderson. Burn One Down is his second novel.