Why would a man, knowing his life was in danger, turn his back on his killer?

In pre-war London, Olivia Denis wins a plum assignment from her newspaper when she meets the glamorous French fashion designer, Mimi Mareau. Mimi has it all—wealth, talent, acclaim, and a British duke for a lover. But on her first visit to Mimi’s new Mayfair house of haute couture, Olivia finds something else—the body of an unknown man.

Mimi and her three French assistants say they don’t know the man, but is that true? As Olivia spends time around the salon, she learns at least one of the women knew the dead man and all four women are lying.

A British agent in possession of a terrible secret, an attempt on the life of a British leader, a fashion house in the middle of it all, while war marches closer. Can Olivia stop a murderer before he or she strikes again, or will time run out on the fragile peace, ending Olivia’s efforts? 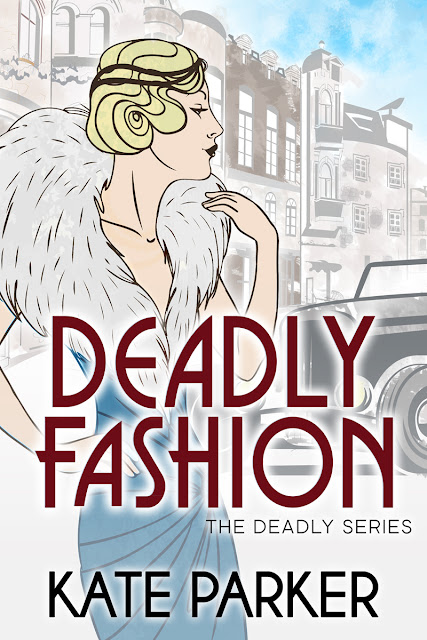 Kate, what books do you currently have published?
So far I’ve published five Victorian Bookshop Mysteries about a young lady in the 1890’s in London who runs a bookshop while assisting in investigations with the secret Archivist Society.

Deadly Fashion is the third of the Deadly series about a young widow who is a society reporter while secretly carrying out searches and smuggling for her boss, the publisher of the London daily newspaper where she works. These stories take place just before World War II, and in Deadly Fashion, the reporter finds a murdered man in the London fashion salon of a famous French designer.

In the spring, The Killing at Kaldaire House will come out, about a milliner in London in 1905 who is caught between the widow of the murdered man she found, a Scotland Yard detective who suspects she is guilty of murder, and her father’s family of conmen.

Is writing your dream job?
How could it not be my dream job? After a terrible commute in the DC suburbs, I now go to work each day by walking across the house in my pjs. I get to dream up exciting tales of murder and mayhem and set them in the past. Digging through arcane sources online isn’t wasting time, it’s research. I’m my own boss…oh, wait. I named my publishing imprint after my husband, and now he’s decided he’s in charge of my career.  I let him think that. ;-)

This is the first job I’ve ever had that I wanted to go to work each day, and every day is different. Since I write mysteries set in England in the past, this necessitates research trips overseas, purchases of fascinating book reprints from the eras that I write about, and tours of sites that provide insights that make my stories come alive. I feel blessed to have this job.

And if I didn’t write, the voices in my head would never leave me alone.

If you could only watch one television station for a year, what would it be?
Most of the time when I watch TV, I’m watching PBS. Our local affiliate runs a lot of British and Australian  mysteries, including some I’d never heard of before they appeared in the TV lineup.

What do you love about where you live?
I live on the southeast coast of the US, and I love being where I can walk on the beach 12 months of the year. We seldom get snow, and if we do, it disappears in hours. Of course, since it is often hot out, and I love hot tea, air conditioning is essential to life as I want to live it. Our town has been around since colonial times and we are lucky enough to have some wonderful old buildings. Since I’m fascinated with the past, I love to stroll the downtown area. Small, friendly, and not too busy.

Where is your favorite place to visit?
London. Hand me a plane ticket and I’d go in a minute. Every time I go, I’m researching a different book and I’m looking for different buildings, museums, and tours. I can spend hours in the newspaper collection of the British Library, finding such gems as the real female German spymaster who’d been in and out of England twice. No one was quite sure what she looked like, no one knew her real name, and they couldn’t catch her. I used her as a model of the French assassin in Deadly Fashion. And from London, nowhere I need to research is too far by train. I love European trains.

What would you name your autobiography?
Dropping the Ball. Many, many years ago when my children were small and I was working outside the home full-time, I read an article called “Juggling.” That was when I knew if I was to write nonfiction on my methods, I would call it Dropping the Ball.

What’s your least favorite chore?
I hate washing dishes. The first time my husband of forty years came over to my house, he found a neat, clean house and a sink full of dirty dishes. He washed them for me, and I was instantly in love. He’s washed them ever since. He’s a keeper.

Sounds like it! What’s one of your favorite quotes?
George Eliot’s “It’s never too late to be what you might have been.” I suspect this has nothing to do with playing tennis or being a ballerina, but since I was retired before I was published, I’ll take this as my guiding star.

Where is your favorite library, and what do you love about it?
The British Library near King’s Cross in London. I could get lost for years in the newspaper reading room with all those fabulous issues, year after year, on microfilm. The gift shop on the ground floor is fascinating. And there’s a pub that does great lunches right across Euston Road.

What are you working on now?
I’m getting The Killing at Kaldaire House, my 1905 story about a free-spirited milliner, ready to send to my editor. In my spare moments, I’m doing research for Deadly Deception, the fourth in the Deadly Series, that immediately follows Deadly Fashion. I know that Olivia, my heroine in Deadly Fashion, will be following another mystery with twists and turns as Europe prepares for war. 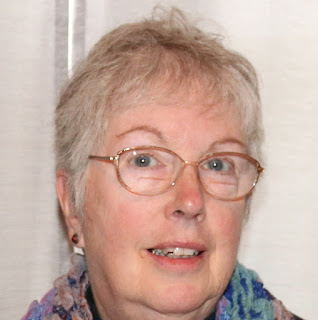 Kate Parker grew up reading her mother’s collection of mystery books and her father’s library of history and biography books. Now she can’t write a story that isn’t set in the past with a few decent corpses littered about. It took her years to convince her husband she hadn’t poisoned dinner; that funny taste is because she can’t cook. Now she can read books on poisons and other lethal means at the dinner table and he doesn’t blink.

Their children have grown up to be surprisingly normal, but two of them are developing their own love of creating literary mayhem, so the term “normal” may have to be revised.

Living in a nineteenth century town has further inspired Kate’s love of history. But as much as she loves stately architecture and vintage clothing, she has also developed an appreciation of central heating and air conditioning. She’s discovered life in coastal Carolina requires her to wear shorts and T-shirts while drinking hot tea and it takes a great deal of imagination to picture cool, misty weather when it’s 90 degrees out and sunny.