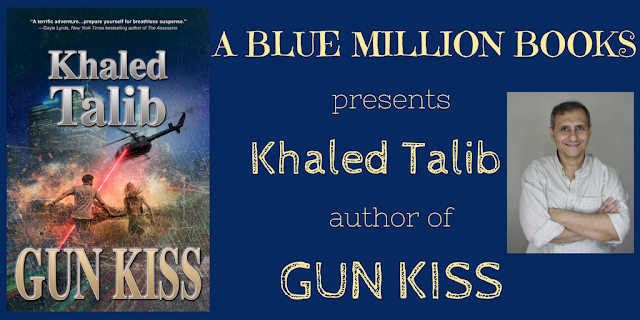 When the Deringer pistol that shot Abraham Lincoln is stolen and ends up in the hands of a Russian military general, covert agent Blake Deco is tasked by the FBI to head to the Balkans to recover the historical weapon. Meanwhile, the United States media is abuzz with news of the mysterious disappearance of Hollywood movie star, Goldie St. Helen.

After Blake’s return from overseas, he receives a tip from a Mexican friend that a drug lord, obsessed with the beautiful actress, is holding her captive in Tijuana. With the help of a reluctant army friend, Blake mounts a daring rescue. What he doesn’t expect is to have feelings for Goldie—or that a killer is hunting them. 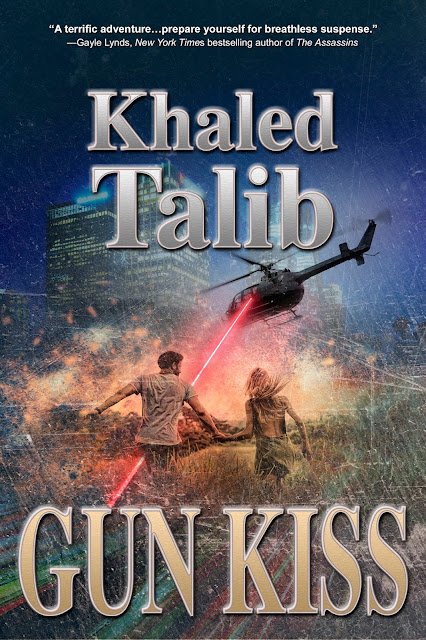 Khaled, what’s the story behind the title of your book?
Gun Kiss is a metaphor for finding love during trouble times. It’s a story about a man who rescues a movie star from a drug lord, but as they fall in love with each other, their happiness is interrupted havoc.

Where’s home for you?
I live in Singapore. I spent some years working in the Middle East, and I travel a lot. So, I’d like to describe myself as an international citizen, especially since I enjoy other people’s culture and food.

Where did you grow up?
I grew up in Singapore. I was born here. However, I feel like a foreigner nowadays. Things have changed. I don’t fit in. Then again, I never did because I’m a minority. Singapore’s culture and values may not necessarily be mine.

What’s your favorite memory?
The amusement park, and having cotton candy.  Magical place.

If you had an extra $100 a week to spend on yourself, what would you buy?
A couple of kindle books. Then I’ll save the rest and buy a nice pair of shoes at the end of the month. I like shoes.

What’s the dumbest purchase you’ve ever made?
An old, red Miata that was a guzzler.

What’s the most valuable thing you’ve learned?
Never stand at the edge; someone might push you. It happened to me once when I was standing at the edge of a pier. Lesson learned.

What is the most daring thing you've done?
I rescued a stranger from drowning. It happened in Malaysia. I gave him my life jacket. I didn’t realize how strong the current was until I had removed the life jacket. It took all my strength to swim back to the boat.

What is the stupidest thing you've ever done?
I answered a call and forgot I was frying some fries. The flame almost hit the ceiling, but thank God it got put out on time.

What’s one thing that you wish you knew as a teenager that you know now?
How fast time flies.

What makes you bored?
People who talk about stocks and finance, business and computers.  People with no sense of humor.

What is your most embarrassing moment?
A woman in a car at the gas station laughed at me as I stood outside searching my pockets for my cash card. I was so preoccupied in finding it that I forgot it was in my mouth.

What makes you nervous?
Deadlines . . . I hate deadlines. I hate to rush. I’ve seen how rushing causes injury to people. People loose control when they are forced to rush. Total chaos. I hate it.

What makes you happy?
Chocolates, a good movie, and traveling. The idea of going on a train journey always sounds nice.

Who are you?
An observer.

What brings you sheer delight?
Buying a perfectly-sized pants at the mall without having to adjust it.

Would you rather be a lonely genius, or a sociable idiot?
A lonely genius. Best to be heard of than laughed at.

What’s one of your favorite quotes?
"Writers have dual citizenship. They live in the seen and unseen world." It’s taken from The Little Book of Muses, a collection of inspirational sayings for writers. I wrote the book.

What’s your favorite line from a book?
"Nowadays people know the price of everything and the value of nothing." Oscar Wilde’s The Picture of Dorian Gray.

What would your main character say about you?
Here’s a guy who knows how to dress up his characters.

Is your book based on real events?
Yes, they are, although it’s heavily dipped in a jar of fiction. I collect stories from here and there, then make up my own. I try to imagine the situation, how it would have been and draw my own conclusions.

Are you like any of your characters?
My sense of humor. In Gun Kiss, you’ll notice that in the protagonist.

One of your characters has just found out you’re about to kill him off. He/she decides to beat you to the punch. How would he kill you?
He’ll probably toss me out of the window or poison the box of chocolate.

Who are your favorite authors?
Too many to list down!

What’s one pet peeve you have when you read?
When my Kindle battery dies.

Do you have a routine for writing?
I write whenever I feel like it. It can be anytime of the day. But at times, I’ll need chocolate to boost my energy, in addition to a hot cup of coffee . . . with sugar.

Where and when do you prefer to do your writing?
At home, in my bedroom. I’m not one of those people who can concentrate at a café with a laptop. Knowing me, I’ll people watch instead of looking at the screen.

What’s the best compliment you’ve ever received about your writing?
People repeatedly tell me that my writing feels like a movie.

What’s the hardest thing you’ve ever had to write?
In Gun Kiss, I wrote a military battle scene. It was tough because I had to coordinate everything from various angles while managing characters and dialogue while everything was ricocheting and blowing around them.

What’s the worst thing someone has said about your writing? How did you deal with it?
Someone left a comment on Goodreads and described my novel, Smokescreen, a “B-league thriller.” Then again, there are so many trolls out there. Well, I complained to Goodreads, of course, but at the same time I don’t really care. You find criticisms and trolls everywhere. Other writers get it too. Have faith in your readers. People can see what’s true and what’s not.

What are you working on now?
I’m writing a murder mystery set at a winery in South Australia. I used to handle the public relations account of the South Australian tourism office, so I’m familiar with the State. 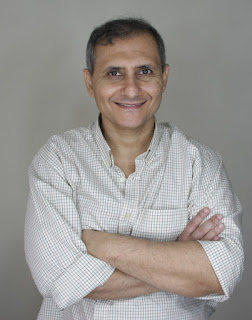 Khaled Talib is the author of Smokescreen, Incognito, and Gun Kiss. Born and raised in Singapore, Khaled is a former journalist with local and international exposure. His articles have been published and syndicated to newspapers worldwide, and his short stories have appeared in literary journals and magazines. The author is a member of the Crime Writers Association and the International Thriller Writers. Khaled's novel Incognito won the Silver award for the AuthorsDB Book Cover Contest 2017.