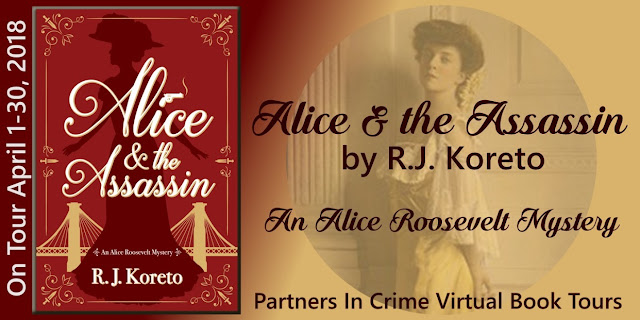 
In 1902 New York, Alice Roosevelt, the bright, passionate, and wildly unconventional daughter of newly sworn-in President Theodore Roosevelt, is placed under the supervision of Secret Service Agent Joseph St. Clair, ex-cowboy and veteran of the Rough Riders. St. Clair quickly learns that half his job is helping Alice roll cigarettes and escorting her to bookies, but matters grow even more difficult when Alice takes it upon herself to investigate a recent political killing--the assassination of former president William McKinley.

Concerned for her father's safety, Alice seeks explanations for the many unanswered questions about the avowed anarchist responsible for McKinley's death. In her quest, Alice drags St. Clair from grim Bowery bars to the elegant parlors of New York's ruling class, from the haunts of the Chinese secret societies to the magnificent new University Club, all while embarking on a tentative romance with a family friend, the son of a prominent local household.

And while Alice, forced to challenge those who would stop at nothing in their greed for money and power, considers her uncertain future, St. Clair must come to terms with his own past in Alice and the Assassin, the first in R. J. Koreto's riveting new historical mystery series.

Book title: Alice and the Assassin 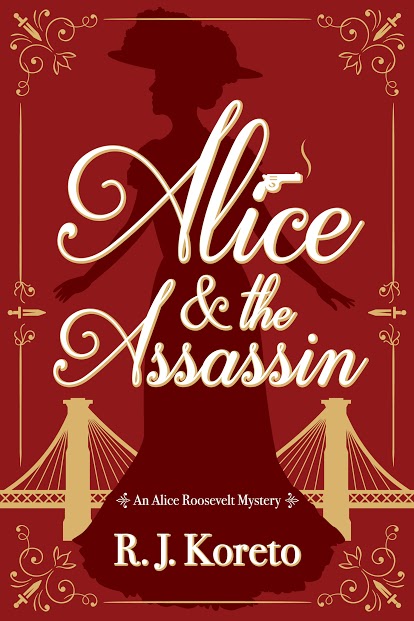 
R.J., what’s the story behind the title of your book?
"Assassin" says it all—it's Alice Roosevelt solving the mystery of President McKinley's assassination in 1901. The second book in the series, The Body in the Ballroom, comes out later this year.

Where did you grow up?
In New York City, just like Alice Roosevelt.

Who would you pick to write your biography?
Henry Fielding, who wrote Tom Jones. What a wonderful story teller he is! He also holds an important place for mystery writers, as he founded the Bow Street Runners, London's first police force.

Do you have another job outside of writing?
I have a job outside of fiction writing. I spend my day writing articles about tax and accounting regulations. I've been asked if I ever wanted to write a murder mystery set in the accounting world, and I might, because I have a great idea for a title: Bored to Death.

I love that! How did you meet your wife?
We met when found ourselves at adjoining desks, when we were editorial assistants at a  publishing company, some 30 years ago. I bought an IBM-PC and encouraged her to buy one too. I helped her carry it back to her apartment. She cooked me a hamburger. The rest is history.

Would you rather be a lonely genius, or a sociable idiot?
On the spectrum, I'm more on the lonely genius end. There is some controversy about the "genius" level.

What’s one of your favorite quotes?
Friedrich Schiller: "Against stupidity the gods themselves contend in vain." Isaac Asimov used it in a novel.

What’s your favorite line from a book?
“I was thinking, that when my time comes, I should be sorry if the only plea I had to offer was that of justice. Because it might mean that only justice would be meted out to me.” ― Agatha Christie, Murder at the Vicarage.

What would Alice Roosevelt say about you?
Alice might say: "I do think that for the most part, Mr. Koreto provides a fair portrayal of me and accurately describes my successes. But in several places he makes it sound as if I am often difficult and even arrogant. Everyone knows that's not true about me."

To which Mr. St. Clair, her Secret Service bodyguard, might say dryly, "Yes, Miss Alice. He sure got that part wrong."

How did you create the plot for this book? Is it based on real life?
Absolutely! William McKinley was assassinated in Buffalo, but so much remains unknown, such as the emotional state of the assassin. It was fun, and a challenge, to neatly merge real history and fiction. There really are a lot of unanswered questions about the assassination of William McKinley. My plot is fictional, but based on the real political turmoil at the beginning of the 20th century.

Are any of your characters inspired by real people?
Not just inspired—they actually were real people. Alice Roosevelt, her Aunt Anna, her president father, and Nicholas Longworth, who would become her husband. Her bodyguard Joseph St. Clair is fictional, but based on real Rough Riders.

Are you like any of your characters?
Alice's bodyguard, Agent St. Clair, is very different from me: he's a Westerner with little formal education but a lot of experience as a lawman and soldier. But we have one important thing in common: neither of us has any patience for fools.

Who are your favorite authors?
Agatha Christie: No one writes better plots. No one.
George Simenon: He has no equal in setting a scene.
Rex Stout: I wish I could write dialog half as well as he could.
John le Carre: The Smiley books left me dumbfounded.
J.R.R. Tolkien: The richness of his world is a triumph of imagination.

What book are you currently reading and in what format?
I'm more of a print reader than an e-book reader. Right now, I'm catching up on my Ellery Queen and Alfred Hitchcock magazines.

What’s one pet peeve you have when you read?
Plot holes. Everyone can make a mistake, but sometimes I read a mystery where there's a huge logic chasm. I remember throwing one book down and saying, "If that got published, I can certainly write a novel!" I started that weekend.

Do you have a routine for writing?
I write evenings and weekends, usually with a little noise in the background. I grew up right in Manhattan and as a result I can't think if it's dead quiet.

What’s the best compliment you’ve ever received about your writing?
In an online review, one reader wrote she liked the protagonist of one of my books so much that she wanted her to be her friend. I can't even imagine a greater compliment.

You can be any fictional character for one day. Who would you be?
It would probably be a character out of Lord of the Rings. My daughters will laugh at me.

What’s the worst thing someone has said about your writing? How did you deal with it?
One publisher returned a manuscript saying he liked my writing but didn't find one single sympathetic character in the book. Actually, I liked my characters. So I'm thinking, "OK, I'm not a failure as a writer. But I might be a sociopath." That took a while to get over.

What would your dream office look like?
Wood-paneled walls lined with books, all bound in leather. A huge antique wooden desk. A working fireplace.

Are you happy with your decision to publish with Crooked Lane?
I was very lucky to find a wonderful and shrewd agent, Cynthia Zigmund, who gave me valuable advice and then proceeded to reach out to publishers. My publisher, Crooked Lane, was still pretty new, and they were willing to really work with me on my books. It was a wonderful education.

What are you working on now?
Something I'm very excited about. In rural England in 1888, a fledgling police constable helps investigate the murder of a young woman he knew well, the daughter of an Earl. He helplessly watches as the wrong man is convicted and hanged—thanks to the Earl's prejudices. Over the next 35 years, as he rises through the ranks, he keeps revisiting the case, from London to India to the battlefields of World War I, even as the Earl's family faces the repercussions of the murder, generation after generation. We see the change in the noble family, in the constable and in England itself, over the decades.


EXCERPT FROM ALICE AND THE ASSASSIN


I had a nice little runabout parked around the corner, and Alice certainly enjoyed it. It belonged to the Roosevelt family, but I was the only one who drove it. Still, the thing about driving a car is that you can't easily get to your gun, and I didn't like the look of the downtown crowds, so I removed it from its holster and placed it on the seat between us.
"Don't touch it," I said.
"I wasn't going to," said Alice.
"Yes, you were."
I had learned something the first time I had met her. I was sent to meet Mr. Wilkie, the Secret Service director, in the White House, and we met on the top floor. He was there, shaking his head and cleaning his glasses with his handkerchief. "Mr. St. Clair, welcome to Washington. Your charge is on the roof smoking a cigarette. The staircase is right behind me. Best of luck." He put his glasses back on, shook my hand, and left.
It had taken me about five minutes to pluck the badly rolled cigarette out of Alice's mouth, flick it over the edge of the building, and then talk her down.
"Any chance we could come to some sort of a working relationship?" I had asked. She had looked me up and down.
"A small one," she had said. "You were one of the Rough Riders, with my father on San Juan Hill, weren't you?" I nodded. "Let's see if you can show me how to properly roll a cigarette. Cowboys know these things, I've heard."
"Maybe I can help—if you can learn when and where to smoke them," I had responded.
So things had rolled along like that for a while, and then one day in New York, some man who looked a little odd wanted—rather forcefully—to make Alice's acquaintance on Fifth Avenue, and it took me all of three seconds to tie him into a knot on the sidewalk while we waited for the police.
"That was very impressive, Mr. St. Clair," she had said, and I don't think her eyes could've gotten any bigger. "I believe that was the most exciting thing I've ever seen." She looked at me differently from then on, and things went a little more smoothly after that. Not perfect, but better.
Anyway, that afternoon I pulled into traffic. It was one of those damp winter days, not too cold. Workingmen were heading home, and women were still making a few last purchases from peddlers before everyone packed up for the day.
"Can we stop at a little barbershop off of Houston?" she asked. I ran my hand over my chin. "Is that a hint I need a shave?" I'm used to doing it myself.
"Don't be an idiot," she said, with a grin. "That's where my bookie has set up shop. I've had a very good week."
***
Excerpt from Alice and the Assassin by R.J. Koreto. Copyright © 2018 by R.J. Koreto. Reproduced with permission from R.J. Koreto. All rights reserved.

OTHER BOOKS BY R.J. KORETO

Death at the Emerald: A Lady Frances Ffolkes Mystery

Death on the Sapphire: A Lady Frances Ffolkes Mystery

The Body in the Ballroom: An Alice Roosevelt Mystery 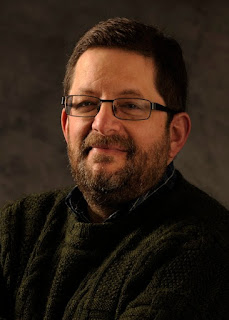 In his day job, he works as a business and financial journalist. Over the years, he’s been a magazine writer and editor, website manager, PR consultant, book author, and seaman in the U.S. Merchant Marine. Like his heroine, Alice Roosevelt, he was born and raised in New York City.

With his wife and daughters, he divides his time between Rockland County, New York, and Martha’s Vineyard, Massachusetts.