Reporter and bridge player Wendy Winchester once again plays ace detective when a country club member is murdered in a hot tub . . .

Now an investigative reporter for the Rosalie Citizen in the Mississippi River port of Rosalie, Wendy still likes to unwind over a game of cards. Following the demise of the Rosalie Bridge Club, she’s started her own group at the Rosalie Country Club. During the first meeting of the Country Club Bridge Players, the dummy has barely been laid down when another dummy gets in a scuffle at the bar across the room. Bridge player Carly Ogle’s husband Brent is at it again.
After the club’s new female golf pro breaks up the fight, Brent storms off to soak in a hot tub. But Carey soon finds the bullying Brent dead in the water, clubbed over the head with the pestle the barkeep uses to crush leaves for mint juleps.

Racist, sexist, homophobic, and an all-around lout, Brent made enough enemies to fill a bridge tournament. So Wendy has to play her cards right to get the story—and stay out of hot water long enough to put the squeeze on the killer . . .

Series: A Bridge to Death, book 2 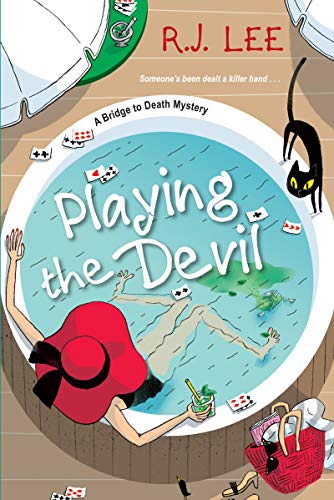 If you could live in any period of time, what would it be?
It would be from 2050 on. By then, we are supposed to be colonizing Mars and the Moon. I wish I were young enough to volunteer to be a one-way colonist on Mars. Does Mars need writers? Ha!

If you could do anything besides writing, what would you do?
It would be singing and acting. I did musical theater in high school and college and had a trained voice. I played the lead of Billy Bigelow in a production of CAROUSEL. I loved rehearsing and the applause.

If you could do any kind of community service, what would it be?
It would be something to help the homeless. As a country, we need to do better in this regard.

If you could live anywhere in the world, where would it be?
It would be in the Hawaiian Islands. But not in a big city like Honolulu. I would prefer Maui or Kauai or Hilo Town on the Big Island. My therapist lived on the Big Island for ten years, and the culture there is so laid back compared to the Mainland.

If you could sit down and have coffee with any author, who would it be?
It would be Harper Lee. To Kill A Mockingbird is my favorite novel, and I read it in high school just after it had come up. I would like to discuss with her how far we’ve come in solving as a country the problems that still haunt us because of slavery and Jim Crow.

Five things you need in order to work:
•    a white noise machine around me
•    no interruptions from phones
•    an achievable goal for that particular writing session, even if it’s just to begin or finish a scene, chapter or number of pages. I remain flexible on all of these because it never does a writer any good to press.
•    something to sip on—I prefer Coconut-Pineapple Bai
and
•     a sense of time. Writing speeds time up for me. Hours can go by, and I won’t realize that I need to eat or take a bathroom break.

Five things you love about writing:
•    finishing a synopsis so I have a skeleton to work from; coming up with an ingenious solution for an ingenious murder—I always know who did it and why, and I work backwards from there. I never wait until the end to solve my own mysteries.
•    I also love working through problems as I move along. Suddenly, something I’d counted on becomes problematical. But I don’t panic. I bear down and come up with a better way.
•    Three other things that thrill me about writing are the satisfaction that comes from approval from my agent and editor when they have read the final draft
•    the advance and royalty checks
and
•    the book tours. I love interacting with and making new readers.

Five things you love about living in Oxford, Mississippi:
•    it is a writer’s town because of Faulkner. There must be at least two dozen of us who live here, writing across the genres.
•    Our indie book store, Square Books received the 2018 Publishers’ Weekly Indie of the Year Award. I love doing talks and signing there and have a great following.
•    Oxford also has any number of fine restaurants around its fabled Square. Because I lived in New Orleans for thirty years, I have a point of comparison, and I can attest to the fact that some of these restaurants compare quite favorably to what I became accustomed to in the Crescent City.
•    the University of Mississippi (Ole Miss) has many excellent programs to attend—from Broadway tours to lectures of all kinds to film festivals.
and
•    Finally, Oxford has struck a balance between preserving the architecture of the past and realizing new growth in the millennium. It is booming, and I like that energy.

Five things you hope never want to run out of:
•    ideas for my writing, of course. Perhaps every author fears that he or she will run dry. But because I enjoy travel, I am always alert to dialogue, and I take pictures with my eyes of certain scenes I encounter. I expect to write until I drop.
•    I never want to run out of enthusiasm for life. My goal as a youngster was to become a published New York writer, and I have achieved that. But life also throws everyone curves. I lost my husband of thirteen years to lung cancer nearly three years ago, and I have had to reinvent that part of my life. But I haven’t become cynical or abandoned my life’s journey.
•    Of course, I never want to run out of readers, including constantly making new ones on book tours. Their feedback is one of the great rewards of being a writer.
•    Every writer hopes they will never get a bad review, but it seems it’s inevitable. So far with this new mystery series, I have been blessed with great reviews from the national journals and the mystery magazines. So I don’t want to run out of the good ones.
and
•    Finally, I never want to run out of friends and family. I have long-lived genes, but I don’t want to outlive everyone I know and that is dear to me.

What’s your favorite memory?
My favorite memory of all time is getting married to my husband in June at Biddeford Pool, Maine. Will and I were married by a Unitarian-Universalist minister, using our own, original vows. The most precious moment of my life.

What’s the loveliest sight you’ve ever seen?
The loveliest sight I have ever seen was the water off the coast of the Istrian Peninsula in the Adriatic See. Looking down from high above on the road that hugged the coast, there were gorgeous gradations from light to dark blue. Closest to shore, the water was sky blue, then farther out, peacock blue; then royal blue, then nearly purple. Unbelievably beautiful!

What’s your favorite movie snack?
My favorite movie snack is a conventional one: popcorn. But without butter and not too much salt. That’s the only time I eat popcorn because I watch my nutrition and weight carefully. My paternal grandmother lived to be 101, my paternal uncle to 98; my father to 91. If I’m going to live that long, I want to be sure and take care of myself so I can enjoy it. (And still write!) 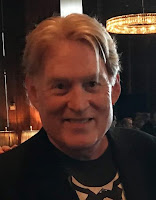 R. J. Lee follows in the mystery-writing footsteps of his father, R. Keene Lee, who wrote fighter pilot and detective stories for Fiction House, publishers of Wings Magazine and other ‘pulp fiction’ periodicals in the late ’40’s and ’50’s. Lee was born and grew up in the Mississippi River port of Natchez but also spent thirty years living in the Crescent City of New Orleans. A graduate of the University of the South (Sewanee) where he studied creative writing under Sewanee Review editor, Andrew Lytle, Lee now resides in Oxford, Mississippi.