A new business might add some much-needed charm to downtown Dorset Falls—and draw tourists to Josie’s yarn shop. But when someone gets murdered, a close-knit community could come undone . . .

Shop owner Josie Blair is finally settling into the pace of living in Dorset Falls, Connecticut. Between running Miss Marple Knits, jumpstarting a blog, and handcrafting items with the help of her knitting pals, Josie’s too preoccupied to worry about her past in New York. And thanks to Lyndon and Harry, the owners of the brand-new antique shop next door, she has another project in her midst—repurposing a box of vintage crocheted doilies adorned with the most curious needlework . . .

But before Josie can formally welcome her neighbors, she discovers Lyndon on the floor of his shop stabbed to death by a rusty old pair of sheep shears. Police have pinned Harry as the killer, but Josie isn’t so sure. Now, she’s lacing up for another homicide investigation—and no eyelet or stitch can go unexamined, lest she herself becomes ensnared in the criminal’s deadly design . . . 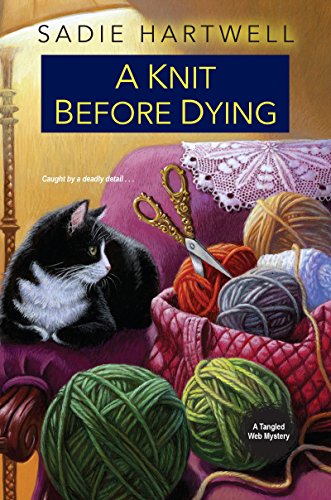 A few of your favorite things:
Yoga pants. Good coffee. My cat, Ellie. Office supplies, especially three-ring binders, sticky notes, pretty file folders, and binder clips.
Things you need to throw out:
Old paperwork—I have a paper clutter problem that I have been unable to tame even with the use of these office supplies!  I could also throw out and replace some socks, now that you mention it.

Things you need in order to write:
A beverage: coffee, tea, seltzer, sometimes a glass of wine. A steno pad and a pen that writes smoothly (black only) so I can take notes. Relative peace and quiet.
Things that hamper your writing:
Excessive noise or anyone asking me what’s for dinner. Any music with lyrics or too much beat—I can’t help wanting to sing along or dance instead of putting words on the page.

Things you love about writing:
Typing The End. I like having written, but the actual writing is a bit of a slog for me. I adore editing and polishing, though, once the first draft is done.
Things you hate about writing:
Maintaining the discipline to keep going—I really wish there was a machine that could hook up to my brain and extract a story fully formed! Saying goodbye to characters I’ve created and loved.

Things you love about where you live:
I’m only a hundred yards or so from the public library. And I can be in any New England state in an hour and a half or less, or in New York City in a couple of hours.
Things that make you want to move:
I’d really like to live closer to the ocean.

Favorite foods:
Sharp cheddar cheese (with or without apple pie). Real maple syrup (with or without pancakes). Pink Lady apples. Fresh raspberries or raspberry anything. Fresh sea scallops.
Things that make you want to throw up:
Peas. Lima beans. Raw seafood. Chocolate ice cream—I know that’s weird, considering I love most anything else chocolate. I think I just like my chocolate full strength, not diluted.

Favorite music:
1980s New Wave and rock.
Music that make your ears bleed:
Overly dramatic and lengthy renditions of the National Anthem—I judge a performance by how many extra notes get added, and in this case a higher score is not better.

Favorite smell:
Peanut butter cookies right out of the oven or lilacs, I can’t decide.
Something that makes you hold your nose:
The litter box.

Something you wish you could do:
Um, dance well?
Something you wish you’d never learned to do:
I almost—ALMOST—want to say knitting. Because it is an expensive, addictive hobby and it gets harder and harder to give away the stuff you knit because you tend to max out your friends and family.

Things you’d walk a mile for:
The newest Sue Grafton novel. A girls’ night out with my besties. A hug from my mom.
Things that make you want to run screaming from the room:
Televised golf games.

People you’d like to invite to dinner:
Michelle and Barry. Robert Downey Jr. (sigh!). Stephen King. Whoever it is that develops mystery series for the Hallmark Movies & Mysteries channel.
People you’d cancel dinner on:
A couple ex-boyfriends come to mind.

The last thing you did for the first time:
Drove a golf cart! Seriously, this was on my bucket list, and I just did it a few weeks ago. And it was as much fun as I thought it would be.
Something you’ll never do again:
Watch the movie Jeremiah Johnson. Not even a young Robert Redford wearing buckskins could induce me to sit through that again, LOL! 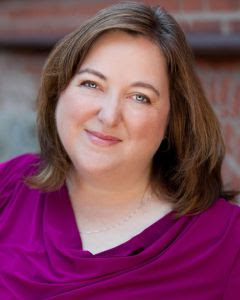 Sadie Hartwell grew up near the Canadian border in northern New York State, where it’s cold, dark, and snowy almost half the year—a perfect environment for nurturing a simultaneous love of mystery fiction and needlework. She attended St. Lawrence University, graduating with a degree in history, and has worked as a waitress, handbag designer/manufacturer, paralegal, and copy editor before turning to writing full-time. Now she gets to play with yarn and make up stories whenever she wants, and wishes everyone had a job as much fun as hers.