Romance
Uvi Poznansky
At last Saul snatches a torch from the corner, nearly breaking the bracket that has secured it in its sconce. Then he comes back to shine the light directly in my face.
“Now look, look at him,” he tells the others, over his shoulder. “Who, in heaven’s name, is this impudent child?”
One of them leafs through some papers, papers that rustle in his trembling hands. At last, “This,” he says, “is David. David, son of Jesse. In Bethlehem, he’s thought to be a rising star—”
“Who cares. Who’s the idiot who invited him?”
“Your majesty, perhaps you’ve forgotten... You gave the order to send for the boy. Music, you said, might do you some good, I mean, it might soothe the ailing spirit. Forgive me, that’s just what you said—”
“I did, didn’t I,” says the king, acidly. “I must have gotten some exceptionally rotten advice. Should’ve ignored it... What the hell was I thinking!”
Torch in hand, he closes in on me. Now he is at an arm’s length. I can feel the heat. The flame licks my forehead.
Instinctively I take a step back.
“What a fresh face,” he seethes. “What a handsome, fresh face. What a smirk on those lips! What a glint in that eye! Look,” he whispers, this time mostly to himself. “Look at the folly of youth! A mirror of myself, the way I was back then, in the early days... Fucking happy! Thinking myself invincible—better than anyone—and yet pretending, somehow, to be humble. It pleases the crowds... Oh, what a laugh! What a horrible, horrible joke!”
Stealthily I slide back. One step, then another.
“Don’t you dare—stop—don’t leave me!” cries Saul. “Here, take this!” And in a flash, his hand flails wildly and out of it comes a flame, fuming ferociously, directly at me. It tears the air with a shriek—
And before I know it, my hand shoots up and catches the thing, catches the torch by its wooden rod.
In a blink his expression changes, or perhaps this is just an illusion, a shadow that dances across his face.
“I should have known you could do it,” he says.
And I say, “Do what?”
And he says, “Recover.” In his mouth, the word is bitter.
And I say, “Forgive me, your majesty. Recover I must.”
And he says, “You’re too good at it.”
And I shrug. “It’s just a skill I have.”
“Alas,” he says. “It’s a skill I’m yet to learn.”

David in Rise to Power 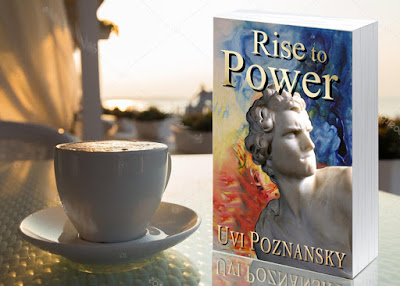 ★ Love historical fiction? Treat yourself to a gift ★
Historical Fiction with a Modern Twist...
The complete series:
The David Chronicles

More posts from author
Wednesday, 08 April 2020 It’s not immediately that I notice the smell
Friday, 03 April 2020 To see her more clearly I must squint
Wednesday, 01 April 2020 Let me introduce you to my author friends