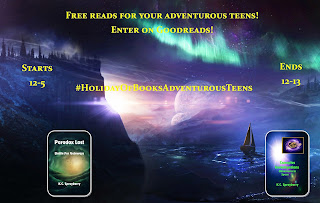 Welcome to Tuesday Blog Share. Today, we’re going to be talking about a major giveaway. Are you still searching for a special gift for your teen? Have you thought about ebooks? Your teen can read them on the Kindle app on their phone. And, what’s even better, if you click the link below, you have the opportunity to get not one but two ebooks that will keep them happy for hours!
Join the Giveaway Here!
That’s right. It’s giveaway time again. This time, for the Holiday Of Books, we’re going to focus on teens. Canoples Investigations Adventures in Space 1 covers this intrepid group of teen space investigators as they solve one mystery after another on Canoples Station. On the other hand, if your teen or teens are more into time travel and fantasy, Paradox Lost Battle for Gateways is probably more their style. Triplets have to figure out how to rescue their father, trapped beneath a building as the 1906 San Francisco earthquake is about to start while also dealing with new powers that not only enhance what they already have but are setting them up for a monumental gift. 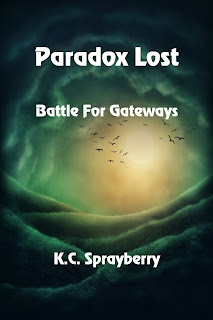 Blurb
The past changed the future …
. . . the future must salvage the past.
Triplets DJ, Matt, and Elisa are as diverse in looks as they are in Talents. Travelers with abilities that astound the adults in charge of them, they have nothing more urgent on their minds than a spring trip to Peru.
Mysterious voices, Rogues bent on destruction, and typical sibling rivalry pull these teen apart at a time when they need to work together. Tragedy further lengthens that divide. Can they overcome their problems and become a team? Is the Traveling world doomed because they can’t cooperate?
Excerpt
He stood on the banks of the Coosawhatchie River. The man of many years stared across the small waves causing a rowboat at a pier to bob up and down. The boat seemed to represent his life, from the day he arrived, throughout his own education where he felt as if Travelers made up the rules as they went along, and into his own years actively traveling through time.
He had been graced with the name of Dennis James Sullivan. Dennis for his father, the greatest fire chief in San Francisco’s history, and James for his mother’s brother, a banker in the Midwest.
Both had contributed to his youth, but James, as he was called, learned more from the father he’d planned to emulate, until fate in the form of a Gateway changed everything seconds before the Great Earthquake and Fire of 1906.
James believed that he had conquered the turmoil he felt at abandoning his mother. His duty had been to change Traveling, according to the woman who had approached him as he mourned for his father. He was always one to obey duty. His life had certainly been filled with excitement in the early years, but then he gave up his jaunts through history to raise his family and teach future Travelers.
About K.C. Sprayberry
Born and raised in Southern California’s Los Angeles basin, K.C. Sprayberry spent years traveling the United States and Europe while in the Air Force before settling in northwest Georgia. A new empty nester with her husband of more than twenty years, she spends her days figuring out new ways to torment her characters and coming up with innovative tales from the South and beyond.
She’s a multi-genre author who comes up with ideas from the strangest sources. Those who know her best will tell you that nothing is safe or sacred when she is observing real life. In fact, she considers any situation she witnesses as fair game when plotting a new story.
Find out more about my books at these social media sites:
Facebook
Twitter
Website
Goodreads
Amazon Author Page
Google +
Pinterest
Manic Readers
AUTHORSdb
Readers Gazette
Instagram
Original link