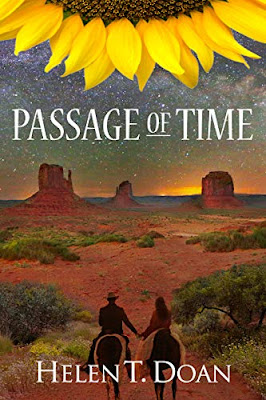 Available on Amazon UK, Amazon US
and Amazon CA
Set in the American west at the start of the Indian wars, Passage of Time is about finding one’s true self while facing impossible choices.
I'm pleased to welcome author Helen T. Doan to The Writing Desk:
Tell us about your latest book

My latest book is Passage of Time, featuring time traveler Kate Hunter and Cheyenne adoptee Nathan Walker. The book is set in 1857 in the American plains at the time of the start of the Indian wars, and focuses on the Cheyenne tribe. The plot revolves around tribal customs, the Battle of the Solomon, and math numbers known as the Fibonacci sequence.
What is your preferred writing routine?

I guess my preferred writing routine would be to research/write almost nonstop for several hours without interruptions, taking only micro rests to grab healthy snacks and meals. I swear snacks fuel my brain cells. I’ve been known to often start my writing day at 9 a.m. and finish it at midnight or later. But that was when there was only myself to think about.
Now I have a red-rumped parakeet that shrilly whistles for my attention, a British bulldog that wants to go for walks, and a boyfriend who works the sunrise shift. All that, as well as trying to fit in eight hours of sleep, regular exercise, time to build a social media following…and writing. Although I can multi-task — it comes from my having been a newspaper editor/reporter — I dream of a solo three-month author residency in Pierre Burton’s Dawson City childhood home in the Yukon, where I could burn the midnight oil and write until I run out of snacks or ideas.
What advice do you have for new writers?

My first attempt at writing a book was in Grade 8, and I’m still writing all these years later because I can’t not write. After my husband died, I enrolled in a newspaper journalism program to hone my writing skills because I wanted to be a published author. I also took creative writing courses, attended romance writing conferences, and learned how to write realistic dialogue by reading dozens of Nora Roberts’ books.
So here’s my advice to new writers: If you’re passionate about writing, do everything to learn your craft, and read, read, read. Let those inevitable rejection slips spur your determination. If you’re lucky, some editor might let you know how you can improve your writing so you don’t continue repeating your mistakes.
What have you found to be the best way to raise awareness of your books?

So far, I’ve had success with free book promotions and also when I’ve been asked to speak about my book to various audiences. I’m hoping this guest blog will be yet another way to raise awareness for Passage of Time.
Tell us something unexpected you discovered during your research

Until I read Colorado Legends & Lore by Stephanie Waters, I was unaware of a natural phenomenon Denverites call stripper syndrome, whereby human perspiration acts like a conductor during lightning strikes, causing clothing to be blown off a victim’s body.
Seems it happens a lot at Denver’s Coors Field during baseball games. When someone is struck naked this way, the crowd quickly strips to do a naked wave on the JumboTron. I will certainly find a way to use the stripper syndrome in one of the sequels.

I think love scenes are hard to write. It’s always a challenge to not repeat the same phrases you’ve used elsewhere in the book, or in another book. The first love scene between Kate and Nathan was challenging because they came from different time periods. Initially I used Kate’s POV, but soon rewrote the scene using Nathan’s, because it created humor and allowed the reader to better understand Nathan’s shock at seeing Kate’s flimsy undergarments, which were far removed from 19th century attire.
What are you planning to write next?
I’m currently writing the as-yet-untitled sequel to Passage of Time. The setting is the unruly early years of Denver at the time of the Pike’s Peak gold rush. Mountain men and bands of Cheyenne and Arapaho Indians seasonally came to the area. Among the daily influx of professional and amateur gold seekers who also arrived at the Cherry Creek settlements were gamblers and thieves and eventually worse criminal types.
Imbibing too much vile liquor led to violence between men – murder or a duel was the common method for settling disputes. Eventually vigilante committees were formed to decide the fate of wrongdoers. A quick hanging at a gallows set up on the banks of the Platte river was the usual punishment for serious crimes. In this atmosphere, finding the one person who might know how to get Kate back to her time will not be easy for Kate and Nathan.
Helen T. Doan
# # #
About the Author 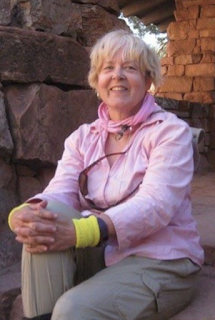 Helen T. Doan lives in Southern Ontario, where she was lifestyles editor/reporter for a daily newspaper. After later completing her sociology degree, she taught ESL at a private school on Geoje Island in South Korea. Writing has been her passion since Grade 8, and in 2018 she published Passage of Time, the initial book of a multi-book historical romance saga about time traveler Kate Hunter and Cheyenne war chief Nathan Walker. Find out more at Helen’s website: www.helentdoan.com. You can contact Helen on Facebook and Twitter @HelenTDoan
Original link