Guest Post by Marian Veevers, Author of Jane and Dorothy: A True Tale of Sense and Sensibility 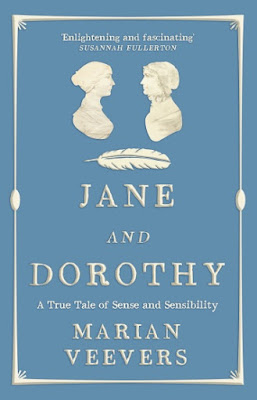 New on Amazon UK and Amazon US
Jane Austen and Dorothy Wordsworth were born just four years apart, in the 1770s, in a world torn between heady revolutionary ideas and fierce conservatism, and both were influenced by the Romantic ideals of Dorothy’s brother, William Wordsworth, and his friends.
Until now I have always been a fiction writer and my first non-fiction book, Jane and Dorothy: A True Tale of Sense and Sensibility, which traces the lives of Jane Austen and Dorothy Wordsworth, has taken me on an interesting journey of discovery.
Hilary Mantel has recently accused some women writers of historical fiction of 'falsely empowering' female characters, endowing their subjects with anachronistic ideas and behaviours. As a writer of historical fiction, I am keenly aware of the difficulty of balancing historical accuracy with editors' insistence on 'strong' 'sympathetic' central characters. Female protagonists are expected to be, in some sense, 'empowered'; a hapless victim makes for a dull story. And they should be appealing too. One American editor objected that a heroine of mine was just not likeable enough; the character in question was Lady Macbeth and I felt I had done everything I could to make her sympathetic, considering the constraints of history!
But as I turned from fiction to fact and traced the Austen and Wordsworth stories, I began to wonder whether the difficulty might lie in how we define 'strong' and 'empowered'.
Jane and Dorothy were born just four years apart, neither ever married and both faced a world in which it was almost impossible for genteel women to live independently; a world which expected women to marry; a world which ridiculed the 'old maid'. Neither of them made a fortune as a businesswoman or enjoyed a gloriously uninhibited love-life – as they might have done had they inhabited the kind of fictional world of which Hilary Mantel disapproves. But there was rebellion and subversion. Neither life was a passive acceptance of injustice.
Theirs were small but significant acts of independence which deserve recognition. Whether it is Dorothy's 'unladylike' striding across mountains, or Jane's quiet writing on subjects of which her family must have disapproved; whether it is Dorothy's running away to live with a slightly disreputable but dearly loved brother, or Jane's integrity in refusing to commit her life and body to an advantageous but loveless marriage, we should not underestimate the courage which lay behind these actions.
But sometimes Jane and Dorothy's decisions brought pain and heartbreak. Jane's empty life as a spinster in Bath affected her mental health. Comparing her letters and the recollections of her relatives with modern medical analysis of depressive illnesses suggests just how much it cost such a brilliant woman to live the dull life of 'moral rectitude' and 'correct taste' which her nephew would celebrate in his memoir. And Dorothy's relationship with her brother was a troubled one. The talk of incest which began in her own lifetime resurfaced in the mid twentieth century much to the discomfort of some scholars who chose to take refuge in Thomas De Quincey's derogatory dismissal of Dorothy as 'unsexual'. But there is no evidence to support this denial of Dorothy's sexuality and when I set recent research into the sexual attraction of siblings alongside certain known facts about William Wordsworth, I found a heart-breaking narrative.
Jane and Dorothy were born into similar circumstances, but their decisions took them along diverging paths. For both there was a degree of fulfilment, for both there was a measure of pain.
Marian Veevers
# # #
About the Author 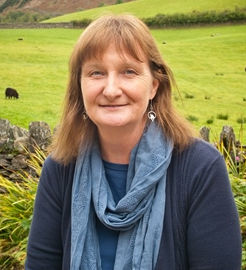 Marian Veevers lives in a small village in the English Lake District and when not writing is a guide for the Wordsworth Trust at William and Dorothy Wordsworth's home, Dove Cottage in Grasmere.  She also writes under the pen name of  Anna Dean and her Dido Kent series of murder mysteries are published by Allison and Busby in the UK and MacMillan in the US. Marian says, 'I am a thorough-going Jane Austen enthusiast; though I find some of the film and television adaptations a little too sugary. Jane Austen was an intelligent and perceptive woman and I believe there is a complexity and, occasionally, a hard edge to her work which is sometimes lost in translation to the screen.' Find out more at Marian's  website
www.marianveevers.co.uk and find her on Twitter @MarianVeevers.