Guest Post: Inspiration behind the writing of the novel The Italian Couple, By J.R. Rogers 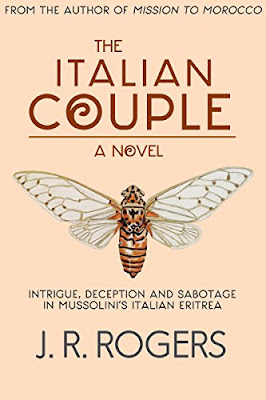 Available on Amazon UK and Amazon US
An atmospheric historical thriller of subterfuge and illicit love with a menacing plot set in Mussolini's Asmara, Italian Eritrea.

I am a novelist who always has places in mind first—even before a story is formed. Typically, in between novels, my mind begins to wander about where to set the next one. So it was that I remembered—this was a year and half ago—reading an article in the newspaper.

It must have been in the New York Times, about Asmara in Eritrea seeking designation as a World Heritage site by Unesco because of its trove of Art Deco buildings erected in the 1930s when the town was one of Mussolini’s Italian East African colonies. I’ve lived in Africa, and visited a few cities there, and so my curiosity was piqued at once though I was never able to visit Asmara.

Intrigued, I went on the Internet and looked at the many photographs and read more about Asmara’s Italian colonial heritage. But besides the truly amazing architecture, almost all of the buildings are still intact and in many cases being preserved, also were details about something referred to as the teleferica, the engineering marvel that was the Italian-built Asmara-Massawa cableway opened in 1937. It linked Italian Eritrea to the sea. Food, supplies, and war materiel were moved from the colony’s Red Sea seaport in Massawa to Asmara 7,600 feet above sea level and 44 miles (72 Kms) away.

At the time it was the longest cableway in the world. Unfortunately it no longer stands. The British army dismantled it during their occupation of the former Italian colony after World War Two, and sold off the parts as war reparations.

So I resolved to set my next novel of historical fiction in Asmara. I now had the place in mind, the time period, the teleferica that I selected as the major plot point and had also read about the Circuito Asmara, a car race run through the streets of Asmara that debuted in 1938. The race, along with a driver character I created nicknamed Soldi—money, because he almost always won, would become my second plot point.

I set about to imagine a cast of characters and set them in motion with a story that gradually coalesced as I began to write over a period of a year. Unlike some authors, I don’t craft a story in any detail beforehand. Instead I use major plot points to anchor it in my mind. I prefer to see where the story goes, an organic approach to writing, as long as it respects the boundaries I have set. But I did decide a few details ahead of time: because Eritrea at the time was Italian Eritrea my protagonist had to be Italian, so I created a Colonel Francesco Ferrazza, a disciplined and inflexible Royal Italian Army officer and paired him with a British wife, Emilia.

Thus Francesco and Emilia became the Italian couple. She had to be British because early on I decided that her father would be the leading British intelligence officer at the embassy in Rome. My novels always feature an element of espionage and intrigue and I had something in mind though it was not a fully formed idea when I began.

Now it remained only to find a reason why the Ferrazzas were to find themselves in Asmara in the first place. I wanted there to be some historical accuracy to this. When I uncovered the existence of Italy’s Fascist Military Information Service (MIS), responsible for intelligence and security activities and for the integrity of the Italian State and of the Italian Empire from 1900 to 1946, I promptly enrolled Colonel Ferrazza and dispatched him to Asmara. 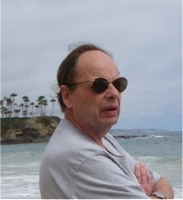 J.R. Rogers is a literary historical thriller novelist of foreign intrigue and espionage. He has written seven novels in this genre. He is also a prolific short story writer a number of which have been published in various literary publications and/or online sites. An avid reader he holds a university degree in French literature and studied short story writing. He has lived in Europe and West Africa and now lives in southern California. For more information visit https://authorjrrogers.com/theitaliancouple/
Original link