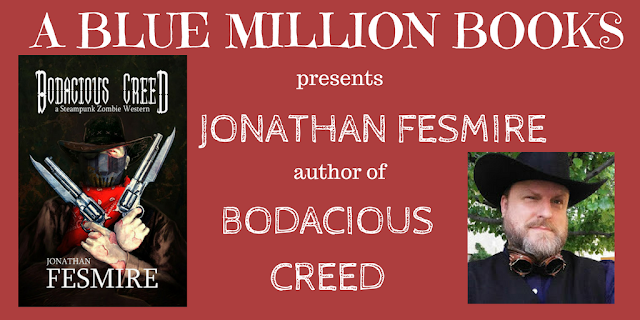 ABOUT THE BOOK (BODACIOUS CREED)

US Marshal James Creed has known loss, starting from the untimely death of his wife and daughter in a sudden fire. His work, chasing down and arresting outlaws across the Wild West, is all he has left to live for. Then one day, in 1876, the infamous killer Corwin Blake catches Creed by surprise and guns him down.

Creed awakes after a mysterious young woman resurrects him in a basement laboratory beneath a brothel. Half alive, Creed feels torn between his need for justice and his desire to fall back into the peace of death. Creed's instincts drive him to protect the city of Santa Cruz, California, from the outlaws it harbors while searching for Blake.

He uncovers a secret criminal organization, likely protecting Blake, determined to use resurrection technology for its own ends. The former marshal, now faster, stronger, and a more deadly shot than ever before, must work with a brothel madam, a bounty hunter, and the remaining marshals to uncover the criminal syndicate before they can misuse the machines of rebirth and create more mindless zombies. Meanwhile, he must also stop Blake, before the outlaw kills the only people he cares about.

His own death can wait.

ABOUT THE BOOK (BODACIOUS CREED AND THE FRISCO SYNDICATE)

Like its predecessor, Bodacious Creed and the Frisco Syndicate will be full of steampunk technology, gunfights, mystery, and well-rounded characters. These include the hero, the resurrected U.S. Marshal, James Creed, and the brothel madam and inventor, Anna Lynn Boyd. It will also include a full cast of supporting characters.

While the first novel took place in an alternate version of my home town of Santa Cruz, California, in 1876, the second will happen mostly in San Francisco.

What was San Francisco like at the time? Wild, rowdy, and dangerous. The author has done extensive research on the city and its most notorious criminal district, The Barbary Coast, where much of the tale will take place. In addition to historical crime, add a syndicate raising the dead with steam-based technology, and we have a formula for the sort of danger Creed was born to confront. His greatest challenges lie ahead. 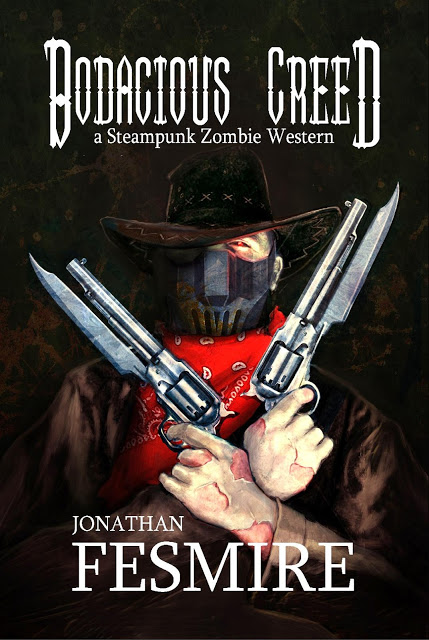 Research from One Steampunk Western to the Next


My name is Jonathan Fesmire, and I love writing steampunk. Specifically, I enjoy writing Wild West steampunk, and when appropriate I like to get a bit of community involvement. That’s why, right now I’m running a Kickstarter to help me pay for editing, cover art, and my narrator’s initial fee for my next novel, Bodacious Creed and the Frisco Syndicate. Backers get some great rewards, like copies of the book in various formats, a deck of themed poker cards, a set of themed dice, the ability to name characters, and more. I also ran a Kickstarter for the first book in the series, Bodacious Creed: a Steampunk Zombie Western, and that novel is doing extremely well.

When I mentioned the new Kickstarter to Amy, she asked me how I’m approaching research for the new novel and how I balance research with writing in general.

If there’s one thing that’s certain about writers, it’s that we each approach our work differently. Some of us prefer to write our first drafts by hand, some to type them, others to dictate them. Some write books with practically no plan in mind, some create complex plot outlines before writing, and others have a general idea of a story and figure out the details as they go.

We may even change strategies from story to story, book to book.

You might suspect that I would approach the research for the second book in a series in the same way that I did the first. In the case of the first two books in The Adventures of Bodacious Creed, you’d be mistaken.

The first book is special in various ways. Let’s start with the basics. Like most steampunk fiction, it takes place in a past that never was, in this case, in Santa Cruz, California, in an alternate 1876. The world of U.S. Marshal James “Bodacious” Creed has steam-powered undead, automatons, a plethora of handy gadgets, and much more.

I was born in Santa Cruz and lived most of my life in the county. I thought it would be fun to take modern Santa Cruz and cast it back into the past, so the city in Bodacious Creed: a Steampunk Zombie Western, has many of the same streets, and the culture is a skewed reflection of the modern city.

From the outset, that makes the Santa Cruz in my alternate history markedly different from how the city was in the 1870s. Yet I wanted a touch of historical accuracy, so two men who were important in the real city at that time are characters in the book.

Most of the research I did for the first book involved learning about the Old West. I read about clothing styles, money and prices, and slang terms. I learned about the U.S. Marshal Service, though I made some changes to it for my world and read about prostitution in those days. I familiarized myself with where technology stood at the time. That gave me a starting point for devising new steam-based machines.

Research for Bodacious Creed and the Frisco Syndicate is following a more thorough path. While I wanted to honor modern Santa Cruz by creating a Wild West version of it, this next novel will take place primarily in San Francisco, which was crazy at the time.

I knew that I would want more people from history appearing in the sequel, so I started my research with a book called The Magnificent Rogues of San Francisco by Charles F. Adams. I learned about some of the most erratic, brilliant, conniving, and dangerous people to ever live in the City by the Bay. In reading about them, I also received a basic education in San Francisco history from the start of the California Gold Rush of 1849 to around the 1980s. One area that kept coming up as the epicenter of crime, a section of the city called The Barbary Coast. Think of it as old San Francisco’s red-light district, where criminals were seldom caught and a night rarely passed without a murder.

I moved on to researching the Barbary Cost in more depth. The first, and best book I found on the subject? The Barbary Coast by Herbert Asbury. This informal history book, published in the 1930s, has a wealth of information about the area. I’ve been reading through it with great interest, highlighting anything that might be useful in Bodacious Creed and the Frisco Syndicate.

Yet I needed more, and to my surprise, I found a television series from the 1970s for sale on Amazon. You’ll never guess what it’s called. Are you ready for it?

The Barbary Coast. The series stars William Shatner and Doug McClure, and it lasted one short season. As most good fiction does, it takes liberties with history and introduces new characters, but it provides a helpful look at life in San Francisco around the same period as my series.

I also contacted the San Francisco History Center at the San Francisco Public Library, which has a huge database with photographs, old newspapers, and more. The collection is amazing, and it’s helped me to better understand the city at the time.

I’ve just started putting everything together so I can write the novel. That means picking which historical characters I believe will be important to the narrative and figuring out how my characters will fit. The Kickstarter will also have an influence on the story, since some backers will get to name characters and inventions and some will get to appear in the novel. What’s certain is that Creed’s future is uncertain as he heads toward the instability and danger of San Francisco’s Barbary Coast.

To view the Kickstarter campaign, go to http://bit.ly/bodaciouscreed2. 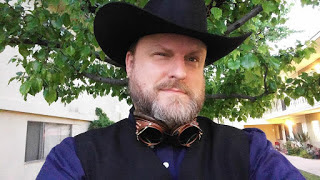 Jonathan Fesmire lives in sunny Southern California with his son. His writes "The Wild Steampunk Blog," located on his website. It covers steampunk, writing, art, and related topics, and also has many interviews with people prominent in the steampunk community.

Check out Jonathan’s interview and excerpt from Bodacious Creed in his first feature on A Blue Million Books.