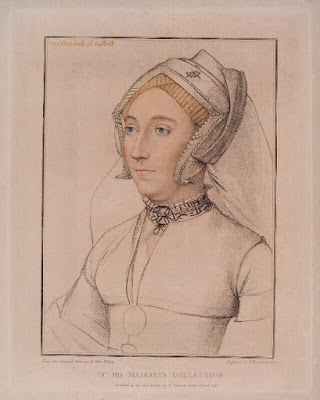 Katherine Willoughby was born on the 22nd March 1509.  Although that's five hundred years ago, as she is the subject of my current work-in-progress I've been living with this fascinating woman for the past two years and feel I know her well.
I first began researching the known facts of her life when I was writing about her husband, Charles Brandon, Duke of Suffolk, for my last book Brandon Tudor Knight. Even by the very different standards of the day, Katherine must have been surprised by his decision to break her engagement to his son and marry her himself.
This presented me with the challenge of understanding the complex relationship between a fourteen year old girl and a man of forty nine. I've had plenty to write about, as Katherine knew all six of King Henry VIII's wives, as well as his son Edward - and even Lady Jane Grey, (daughter of her step-daughter Frances Grey).
This means my new book about her life includes an astounding nine Tudor queens (if you count Jane Grey) and two kings, taking me right up to the coronation of Elizabeth I and my next project, the Elizabethan Series.
I'm now planning a visit to Katherine's family home at Grimsthorpe Castle in Lincolnshire, which was granted by Henry VIII in 1516 to Katherine's father, the 11th Baron Willoughby de Eresby, when he married her mother, Maria de Salinas, lady-in-waiting to Queen Katherine of Aragon. (Amazingly, Grimsthorpe is still occupied by Katherine's de Eresby descendants.)
My new book, Katherine - Tudor Duchess will be out in autumn this year.
Tony Riches
Original link