Heatwave at the Keep

Heatwave is the title of a song by a band called the Blue Nile that I discovered in the version by Dave Stewart (not that one, the other) and Barbara Gaskin.
Not that you care, I guess.
An heatwave is also what’s hitting Europe in this moment – we are at 38°C here in Astigianistan, with a staggering 58% of humidity (that goes up to ‘70% in the evening). It will get hotter in the next days.
People will die, like it already happened in 2003.

All we can do is stay indoors, use the fan in moderation, and try to go through these days. I’ve work to do, and I’ll do it in the night.
In the meantime, I pass my time listening to old records and reading a chiller – because, well, one can try and get chilled at least ideally, right? 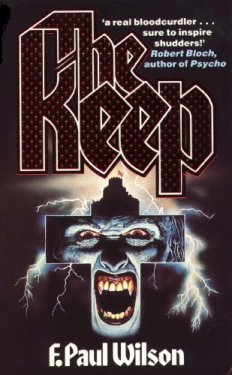 And because I discussed it with a few friends in the past few days, and I re-watched the movie, I am currently reading F. Paul Wilson’s The Keep, the 1981 horror novel that pits the Wehrmacht and the SS against an ancient evil that might be somehow connected with Lovecraft’s mythos.
But it’s better than that, and in particular the evil entity known as Molasar is a nice variation on many trite cliches about vampires and haunts – he’s smart, manipulative, and absolutely ruthless. Really scary.

I read the novel, in Italian, soon after watching the frankly confusing 1983 movie – later I would learn the movie is so bad because the production decided to re-cut and re-edit the original, doing away with over one hour of footage. Reading the book was essential to understand what the heck I had just seen.

The Keep is very much a 1980s-style horror novel, but that’s part of the fun, and it comes with the extra perk of being a story in which Nazis are killed by a monster. The moral debate is there to spice the book, but never gets in the way of the action, and the plot advances at a good clip.

This is the first book in the so-called Adversary sequence, but I never read the others – who knows, maybe should this heatwave keep going…