Turns out a debate opened, on Facebook or thereabouts, two days ago, about the fact whether Howard’s Conan stories are sword & sorcery or heroic fantasy.
Because that’s an important thing, you see.
To some.
Apparently.

I was not present when the thing started, but apparently a friend referring to Conan as sword & sorcery caused somebody’s knicks to get in a twist.
Which is interesting, because everything started from a discussion about Fritz Leiber (him again), and we all know – or should know – that the label of Sword & Sorcery was coined by Leiber when Moorcock asked him about a tag for “the sort of fantasy stories Robert E. Howard wrote”.
It was 1961, the venue was the fanzine Amra.

So, the point should be moot, and yet… is there a difference?

I usually tend to use the terms interchangeably, and it’s quite good when writing articles, so you can alternate “heroic fantasy” and “sword & sorcery” and not be overly repetitive.
But is there a real difference? 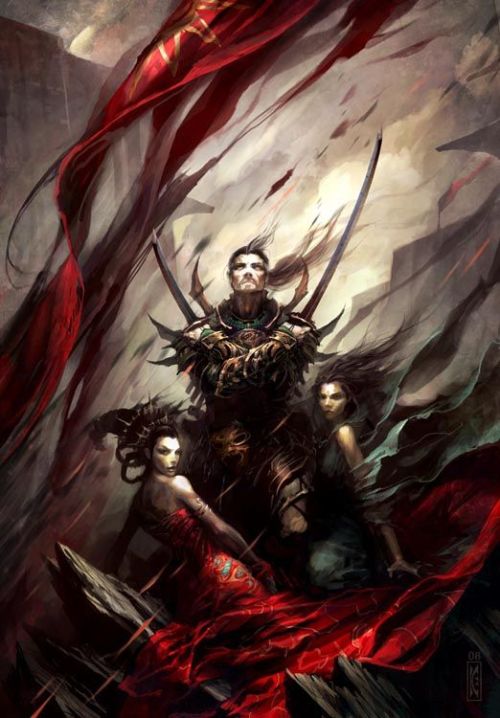 The basic rule of thumb I tend to apply if really need to make a distinction is, heroic fantasy features heroes, sword & sorcery features less-than-heroic characters (but still not the all-out sociopaths of grimdark).
At this point, it all depends on your definition of “hero”, of course.
The swashbuckling, happy-go-lucky factor should also be taken into account – we could try and define a scale, the Sabatini-Dumas scale of swashbuckling, to see what fits where.
At right angles with the Sabatggini-Dumas axix, there should probably be a scale to measure the horror-exotic element, that is generally higher in sword & sorcery (shall we call it the Smith-Lee scale?)

Missing those scales, let’s say that based on my very primitive rule of thumb, in a pinch I’d label most of David Gemmel’s novels as heroic fantasy, and Glen Cook’s Dread Empire stories as sword & sorcery.
So sue me.

In the end, while this makes for a great “shooting the bull” argument while we’re out with some friends for a pizza, I still find a lot of these discussions – especially on venues such as Facebook – to be part of a stake-claiming procedure: choose a label, work to become associated with it, and then decide who’s in and who’s out.
It’s a common marketing practice – but it being common does not make in healthy or good.