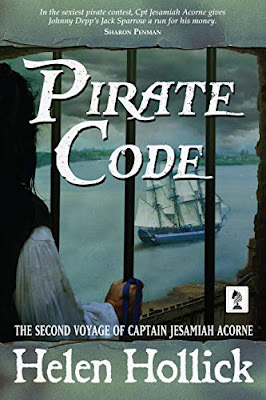 New on Amazon UK and Amazon US
The Time : The Golden Age of Piracy - 1716
The Place : The Pirate Round - from the South African Coast
to the Caribbean
Escaping the bullying of his elder half-brother, from the age of fifteen Jesamiah Acorne has been a pirate with only two loves - his ship and his freedom. But his life is to change when he and his crewmates unsuccessfully attack a merchant ship off the coast of South Africa.

He is to meet Tiola Oldstagh an insignificant girl, or so he assumes - until she rescues him from a vicious attack, and almost certain death, by pirate hunters. And then he discovers what she really is; a healer, a midwife - and a white witch.

Tiola and Jesamiah become lovers, but the wealthy Stefan van Overstratten, a Cape Town Dutchman, also wants Tiola as his wife and Jesamiah's jealous brother, Phillipe Mereno, is determined to seek revenge for resentments of the past, a stolen ship and the insult of being cuckolded in his own home.

When the call of the sea and an opportunity to commandeer a beautiful ship - the Sea Witch - is put in Jesamiah's path he must make a choice between his life as a pirate or his love for Tiola. He wants both, but Mereno and van Overstratten want him dead.

In trouble, imprisoned in the darkness and stench that is the lowest part of his brother's ship, can Tiola, with her gift of Craft and the aid of his loyal crew, save him?

Using all her skills Tiola must conjure up a wind to rescue her lover, but first she must brave the darkness of the ocean depths and confront the supernatural being, Tethys, the Spirit of the Sea, an elemental who will stop at nothing to claim Jesamiah Acorne's soul and bones as a trophy for herself.
# # #
About the Author 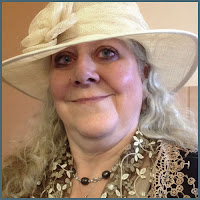 Helen moved from London in 2013 and now lives with her family in North Devon, in an eighteenth century farmhouse. First published in 1994, her passion now is her pirate character, Captain Jesamiah Acorne of the nautical adventure series, The Sea Witch Voyages. Helen became a USA Today Bestseller with her historical novel, The Forever Queen (UK title A Hollow Crown) the story of Saxon Queen, Emma of Normandy. Her novel Harold the King (US title I Am The Chosen King) explores the events that led to the 1066 Battle of Hastings. Her Pendragon’s Banner Trilogy, set in the fifth century, is widely praised as a more down-to-earth historical version of the Arthurian legend. She has written three non-fiction books, Pirates: Truth and Tales, Smugglers in Fact and Fiction (to be published 2019) and as a supporter of indie writers, co-wrote Discovering the Diamond with her editor, Jo Field, a short advice guide for new writers. She runs the Discovering Diamonds review blog for historical fiction assisted by a team of enthusiastic reviewers.  Helen is published in various languages. For more information visit Helen's website www.helenhollick.net and blog www.ofhistoryandkings.blogspot.com and follow her on Facebook
and Twitter @HelenHollick.
Original link