This is sort of a triple package of a post – we’ll get a bit of history, some literature, and then a movie.
Nice way to spend a Sunday, right?

This week we have been talking a lot about Hope & Glory, but I hope I kept it varied enough you were not bored out of your socks.

Now, when we put together Hope & Glory I knew we’d have to put the Thuggee in. The Deceivers are such a big trope in Indian adventure that leaving them out would be unthinkable – and in general, whatever is fine in an Indiana Jones movie is also fine at my gaming table.

This leads us to a gentleman by the name of Sir William Henry Sleeman, KCB.

Sleeman was known to me, very tangentially, as the first Westerner to discover dinosaur fossils in Asia. He also wrote a volume about Indian children being raised by wolves – that would inspire Rudyard Kipling in writing his Jungle Books. Sleeman was also fluent in Hindi and Urdu and in a number of other Indian languages.
But first and foremost, Sleeman was a military man, having served in the Bengal Army before he became a political officer, finally becoming a magistrate in the Jubbulpore district.
Here, he tackled the issue of the thuggee, a secret society of murderers and thieves. The cult/society was rather mysterious, and the fact that the thuggee rarely attacked Westerner had kept the group in the twilight zone of folklore. They were depicted as “holy assassins” in the service of Kali, and their crimes were often dismissed. 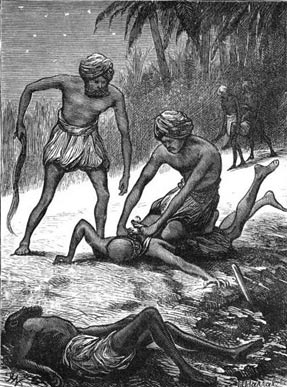 In 1835, Sleeman captured a guy calling himself “Feringhea”, and somehow convinced him to denounce the secret society. This led to a massive campaign against the Decivers, in which 1400 thuggee were hanged or deported, and following Sleeman’s breakthroughs, in a few decades the thuggee were completely eradicated.
The thuggee turned out to be not so holy after all, and not religious fanatics, but just common criminals, if with a highly structured organization, that found expedient to gain the trust of travelers before they killed them to rob them.

End of historical fact.
In 1952, British novelist John Masters published a novel called The Deceivers, a much fictionalized account of the confrontation between the East India Company and the Thuggee.
Masters was a former British officer and had served in India, and during his lifetime wrote a number of highly regarded historical novels featuring the various generations of the Savage family. It has been said that Kipling understood India, but Masters understood the Indians. 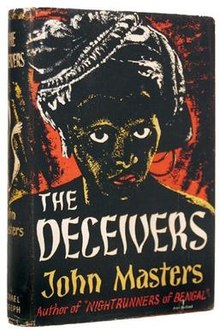 In The Deceivers, we meet William Savage, whose character and exploits are loosely based on Sleeman’s activities, but with a much more adventurous bend. Just like Sleeman, Savage is a British officer that discovers the reality of the fabled Thuggee society, but he actually infiltrates the cult, disguising himself as an Indian in order to discover the secrets of the gang and bring it down from within.
Master’s novel is a fine read, and it was part of the stack of novels I read to find inspiration when designing Hope & Glory.

From Master’s novel a movie was made, in 1988 – produced by Merchant-Ivory and directed by Nicholas Meyer. In it, Pierce Brosnan portrays William Savage as he infiltrates the mysterious Thuggee society.

Like most Merchant-Ivory projects, the movie is lavishly produced and highly melodramatic – and by compressing Master’s narrative in 102 minutes, takes some liberties that turn the historical drama of The Deceivers (the novel) into a pulpy action thriller that’s always on the brink of going over the top.
But the Indian landscapes are beautifully photographed, the costumes and cast are excellent and the film – that is available on Youtube in a TV-quality copy – is still a nice way to spend an evening.

In Hope & Glory the situation is very different, as different are our thuggee, and the action takes place in a time-divergent 20th century, but the novel is highly recommended to get a feel of the historical background of the game, and the movie is required viewing to catch a hint of the colors, the costumes and the landscapes of Hope & Glory.