I'm on the verge of acting out

Romance
Uvi Poznansky
Now I dash eagerly through the long corridor which—to my surprise—has a musty stench. At the far end I spot an arc, which is where a hall opens before me.
The space is enormous. It is lit by two torches: one flickering out of a sconce in the right corner, the other—out of a sconce in the left. Between them lies a flat slab of rock, used as a stage. Above it is a richly draped, raw-silk canopy, decorated by pretty tassels the likes of which I have never seen before. And sheltered in its shadow is a tall figure in a long, royal robe.
There is something about him, something menacing which I cannot begin to put into words. Perhaps it is that thing which he clasps tightly in his fist: an incredibly long spear. Light glances off its sharp iron head, as if to give a signal of some kind, a warning.
It makes me wonder... This is the safest place in the kingdom: his place, his palace. He is surrounded by a dozen or so hand-picked attendants. And yet there he is: a king clinging to his weapon, as if this were a combat zone.
To show respect I fall to my knees before him. The floor is cold, having absorbed the damp of a long winter. The surface is porous, even crumbly here and there, cut of rocks from the Judea mountains. So is the surface of the stage, right in front of my eyes.
I cannot help noting the marks drawn by his spear in the film of dirt up there, around his boots. Scratch, twist, scratch again... No wonder he seems to be in such a royal pain: with all these attendants here to serve him, not a single one has managed to come up with the bright idea of sweeping the floor. They all carry weapons, but not one has a broom.
Sitting nearly immobile, Saul seems as chalky as the walls around him. He sits crumpled—in an odd way—upon the throne. His nails keep digging into the little velvety cushions that are stretched over the carved armrests. Not once does he give a nod in my direction, nor does he acknowledge my presence in any other way.
Which agitates me. It awakens my doubt, doubt in my skill. Much the same as I feel in my father’s presence. Repressed. On the verge of acting out.
So, rising to my feet I blurt out, “Your majesty—”
“Don’t talk,” whispers one of the attendants. “Play.”
David in Rise to Power 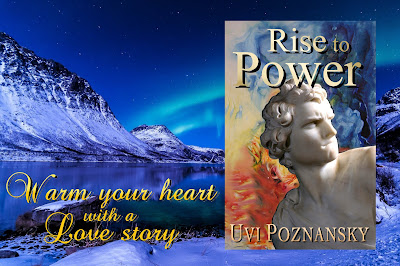 "Somehow, even though we know the outlines of the story, we become completely engrossed, wanting to know how the story we are familiar with will be filled out. On my first reading, I became so engrossed as I read it on a bus that I missed my stop."
- Laurel Gord, Author
Original link