In bed with the vampire Genevieve

Sort of a follow-up to yesterday’s post, this one.
A few days back, on my Italian blog, I mentioned The Vampire Genevieve, a volume that collects Kim Newman’s contribution to the Warhammer Fantasy line of books.
Thebook, that’s been resting on my nightstand for ages, is worth a new read – because it’s true, I re-read, year-in, year-out, either Gene Wolfe’s The Book of the New Sun or Mervyn Peake’s Gormenghast, but there is sitill room enough for other big, massive books.
In particular, two books I return always happily are Roger Zelazny’s Amber Chronicles and Kim Newman’s The Vampire Genevieve.

As Newman himself explains in the funny, insightful introduction to the volume, the Warhammer novels were mercenary work the young writer did to make ends meet, lured by a promise of unimagined riches and literary fame.

The end result is weird, in a very good way.
Let’s see a little bit of history. 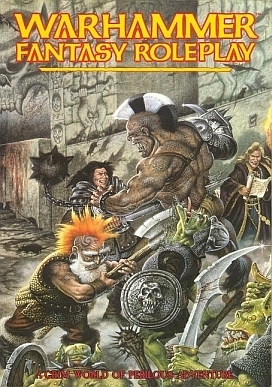 Warhammer Fantasy Roleplay was a spin-off of Warhammer Fantasy Battle, a miniatures game launched by Games Workshop in 1983, and still very popular.
The roleplaying game expanded on the sketchy background of the wargame, and offered a pretty grim world reminiscent of Early Renaissance Europe.
Imagine a fantasy set during the Thirty Years War and you’ll get a general picture.
And indeed, Michael Moorcock’s works were a strong influence on the setting, and his Thirty Years War novel, The War Hound and the World’s Pain is a good template for a WFRP game.

The setting is also close to that sort of stuff I discussed yesterday – a sword & sorcery tinged with supernatural horror, and with a look & feel that might recall certain atmospheres found in old Hammer Horrors.

The only possible point of divergence is the amount of magic – that is pretty high for a straightforward sword & sorcery1.

So, in the late 1980s, Kim Newman was contracted to write stories set into this grim setting. His stories in general adapt different tropes to a fantasy setting – Newman got his inspiration from Hammer movies, from spaghetti western and from a variety of other sources.
His novels read like thrillers more than straight out high fantasies, and are because of this quite original and… different.

Newman (hiding behind the alias of Jack Yeovil) started his series with Drachenfels, a sort of fantasy mystery built around the attempts of a playwright to have his play about performed in a most inauspicious place. I guess my friend Claire might like it.
The follow-up Genevieve Undead is a picaresque sequence of interlinked novellas.
Beasts in Velvet (now that’s a great title) plays with a Jack the Ripper sort of character, but throws in a number of other oddities.
Finally, Silver Nails (a hommage to Robert Howard in the title) collects a few stories featuring the delectable – and damn dangerous – Genevieve Dieudonné.

“the reason she doesn’t have an accent on her name in GW books is that word-processing/printing techniques were so primitive back then that putting in accents was a major pain and used only on special occasions, like when listing her last name, Dieudonné.”

Apart from the engaging narratives, reading Kim Newman is always a source of surprises if observed closely enough. He has a great technique, a solid control of his prose and a dazzling way of weaving in-jokes, quotes and references into his books thatis worth studying.

And by now you probably have guessed that I am a Kim Newman fan – if not a completist – and this also goes to explain the reason why I plan to curl up in bed with The Vampire Genevieve in these cold November nights.

as a game master I usually lowered the magic level, subscribing to the “scarce and dangerous” school of magical thinking. Not that WFRP doesn’t help in such matters.