Italian Vampires on a Mediterranean Cruise--and all the garlic you can eat!

Historical
Diana Rubino
Yes, my vamps love garlic, they don't sleep in coffins, they go out in daylight, and they're not from Transylvania! They're in the Silvius family, descended from ancient Romans, the heroes of
A BLOODY GOOD CRUISE, my Italian vampire romance.

My husband and I are hooked on cruising, and the Med ones have been the most memorable. Sicily and the Greek Islands are heaven on earth. I had to use this part of the world as a setting--and vampires just seemed to fit in there. After all, vamps don't have to be from Dracula's turf. 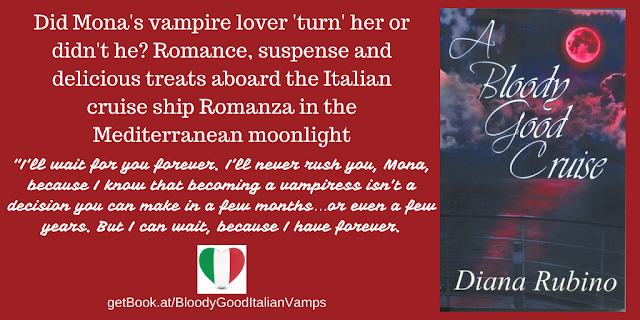 A BLOODY GOOD CRUISE is a fun-filled blend of the vampire world and luxury cruises, starring romance author Mona Rossi and Fausto Silvius, a full-blooded vampire. The popularity of cruises and vampires make it a unique blend, but a very fun and romantic setting.

Coffeetime Romance says in its review, “A Bloody Good Cruise is a high seas adventure with twists and turns around every corner. The lively cast spins non-stop excitement with thrills and enough snags to keep the pages turning.”

I wanted to combine Italian vampires, comedy and cruising in one package, so I hopped on my imaginary ship The Romanza to get my characters in all kinds of trouble. I envisioned the hero, Fausto, as actor Vincent Irizarry (Dr. Hayward on All My Children). That made my job so much easier. He is THE perfect vampire. Italian vampires and hunters (the Vampire Ball Busters) leave the field wide open for comic relief, and I had plenty of chances in this story. Since I'm hooked on cruising and I'm Italian, I didn't need to do that much research.

I met an Italian woman named Fausta in 1983 and always loved that name--I always planned to use that name in one of my books someday. I finally got the chance with the hero Fausto, close enough!

My very first cruise was on the Eastern Mediterranean, beginning in Rome and ending in Istanbul. The ports of call included Rhodes, Cyprus, Santorini, and Egypt. Because I love Italy and cruising, I wanted to combine those passions with a humorous story about vampires and how they face prejudice in the human world.

Scene 3 of A BLOODY GOOD CRUISE

Mona glanced at her watch again. Five minutes to five. She itched to spill all to Tessie, but they’d be pulling out at five, and Fausto should be here any minute. No doubt he’d be in one of his tacky disguises. He knew he’d have enemies aboard, and to throw them off the scent, he’d plod around like a typical American tourist on his first cruise, schlocky enough to blend right in, the exact opposite of what his nemeses expected. So she kept her eyes peeled for a gaudy Hawaiian print shirt, a droopy straw hat, baggy Bermuda shorts, and flip flops.

That would be the real test for Tessie—could she consider marriage with a vampire without freaking? Her finding out would pack a double whammy—her best-selling authors wrote vampire romances, and they were on this cruise, giving workshops on the sexy, mysterious, sexy, transient, sexy lascivious creatures. Mona smiled, her toes curling in anticipation of Fausto’s kisses, his licks, his caresses—and the ship-rocking orgasms they shared.

Just as Mona’s juices started to simmer, Tessie’s eyes darted over to the side. “Don’t look now, but if this guy tries to pick either of us up, we’ll say we’re together. And if he doesn’t believe that, we’ll start smooching.”

Oh, no, Mona thought. Not even here two hours, and some loser is trying to...

“Yo, sista.” He lowered the shades and peeked at her with his midnight blue eyes.

“Fausto! Bello mio!” She slid her arms around his waist, and they fell into an old- fashioned Italian rocking hug, nearly knocking each other over. “You made it!  It’s so good to see you!” She held him at arm’s length and zipped her eyes up and down.  “You look so—” She gestured with her hands. “—so Flatbush! Nobody would ever guess you’re the lifesaving hunk they’ll all flock to when Mussolini’s Revenge breaks out.”

“Yoo gotta prob’m wit’ dat?” His Brooklynese was flawless, too, but why not? He’d lived there for eighty-six years. But he only used the lingo when joking around or when some Joizey bum cut him off in traffic. He stroked the stubbly whiskers and rammed his other hand into his tatty jeans pocket, but it emerged from a hole. “This is the first time I skipped a shave since I was ten.” He now spoke in his regular voice, the plain unaccented American of TV reporters. “I thought of skipping the deodorant but didn’t want anybody to think I’m French. And it’s too cold for the touristy garb. I thought I’d go low-end Gotham instead.”

“You’re low end, all right. Make it more real. Cut into the line at the Chocoholics Buffet, and flip everybody the boid.” She saw Tessie staring bug-eyed, not knowing what to make of this dude looking like he’d just shoved his way off the D train from Flushing Avenue. “Teresa Lionetti, you know Fausto Silvius. Fausto, of course you remember Teresa.” Before the third syllable was out of her mouth, Tessie broke in, “Please! Call me Tessie. Teresa sounds too much like a saint or a mother, neither of which I am or may never be.”

He pulled off a ratty racing glove, and they shook hands.

“Nice to see you again, Tessie. That’s the name of my favorite aunt. Zia Tessie makes the best pasta sauce south of Milano and said she’ll take the recipe to the grave with her, but she didn’t say whose. She’ll never take it to hers, we know that.”

Mona added sotto voce, “He’s, uh B incognito for now, and I’ll tell you why later.” She’d explain the whole story, but only after a few Chiantis, with Fausto offstage. First Mona had to tell her that Fausto and Quintus were related and shared a rare gene of Ancient Rome. Contrary to best-selling lore, true vampirism was genetic. So she’d get bad news: Fausto and Quintus are vampires. And good news: they’re not fanged, cape-swirling ghouls.

Fausto gave Mona a wink. “You’ve got some audience on board, ladies. Every man’s floating fantasy. Toi Brennan from The Cutting Edge is even hotter in person.” He glanced over the rail to the deck below and the crowded dancers, now wiggling to Mambo Italiano. “Did every romance writer in the business sign up?”

“Registration is hopping!” Tessie jumped from one over-the-knee boot to the other, flicking her scarf around her neck. “This was such a good idea of Mona’s! We’re gonna party like it’s nineteen-ninety-nine. Again. Schmaltz it up for the television cameras. And maybe even talk about the writing business.” She rubbed her palms together. “So, Mona tells me you’re a budding medical thriller writer.”

He gave his ever-modest one-shoulder shrug. “I wrote two partials when I was on leave.” He didn’t elaborate, but Tessie nodded her understanding. “They’re on a thumb drive back home.” He jerked his thumb in the direction of the ocean. “If you can take a peek at them, I’d be most obligato.”

“Oh, I’m sure they’re real heart-stoppers. Doctors write some of the best fiction.” She pulled out her cig case once again and snapped it open. “Must be their ability to play God that gives them great imaginations.” She fished in her bag for a lighter. In a flash, he whipped one out of his pocket and lit up for her.

“Grazie.” Tessie took a long drag, and the wind whipped away the smoke when she blew it out. “Now I’m outta here, you two, so you can catch up. I need to help work registration anyway. Later, Mona.” She turned to him. “Fausto, it was fun seeing youBwhoever you’re supposed to be.” She flitted away before Mona could protest she wasn’t intruding on anything.