I discovered a few hours ago that there exists in the Internet Archive an acceptable copy of Jack the Giant Killer, a 1962 fantasy movie, loosely based on the classic folk tale, and one of my childhood’s fond memories.
So I went and re-watched it.

The movie features the same stars (Kerwin Mathews and Thorin Thatcher) and the same director (Nathan Juran) as The Seventh Voyage of Sinbad, as the producer – who had rejected the Harryhausen project – tried to cash-in on that movie’s success. Many viewers today do in fact consider Jack as a rip-off of Sinbad, down to the sub-par Harryhausen-esque special effects.
But this is in my opinion a too harsh evaluation.
The movie has its charms, is almost certainly a direct ancestor of Sam Raimi’s Army of Darkness and can claim a kind of skewed fame as the object of its own small but loyal fetish-oriented fan-base. But we’ll get to that.

The plot in brief: the Duchy of Cornwall is menaced by evil sorcerer Pendragon (Thorin Thatcher at its most sinister) and his army of demons, goblins, monsters and witches. He sets his sights on princess Elaine (Judi Meredith – Pendragon has an excellent taste in women), and tries to kidnap her. She is saved by Jack (Kerwin Mathews), a commoner that as a result of his heroism is charged with taking care of the princess. Elaine is kidnapped again, and Jack has to go and fight Pendragon in his own lair.

Throw in a viking, the seven-leagues boots, a leprechaun, a two-headed giant and assorted shenanigans, and you have a fine romp to keep the kids entertained and thrilled for 94 minutes.
Nice and smooth.
Granted, this is the sort of story in which the Duchy of Cornwall is ruled by a king, and that’s the reason why it is sometimes also referred to as a kingdom, but that’s the middle ages for you, I guess.

There’s a few nice set pieces, including the attack on the ship that ends in the second kidnapping of Elaine, and that was cut from the UK release of the movie because it was deemed too scary for the young audience.
The goblin crowd in Pendragon’s court is quite fun to watch, a triumph of cheap make-up with some vaguely Lovecraftian touches.
And then there is Elaine’s transformation.
Because you see, Pendragon, in his plan to rule Cornwall, turns Elaine into an evil witch. The scene is pretty impressive, and darkly sexy in its own way, so much so that it became an object of fetishism for a portion of the public. You can find slow-motion edits on Youtube, for the aficionados to peruse at leisure.
And here it is, for your entertainment…

Is the movie any good?
Well, much depends on your ability to stand second-rate comedy relief and not-so-good special effects. But it is entertaining, it features at least one very strong scene (the aforementioned attack on the ship), and all in all it’s rather fun. 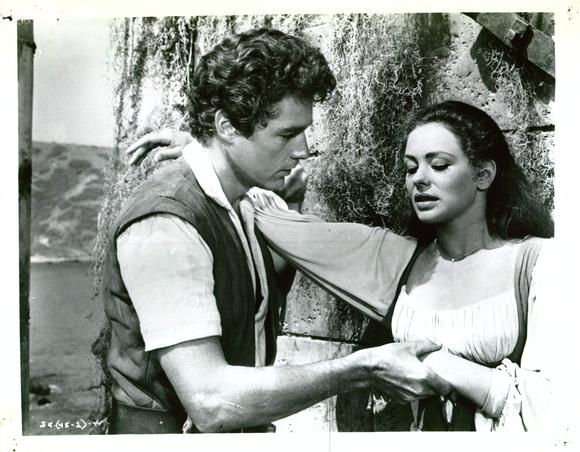 Thorin Thatcher is an excellent villain, and Judi Meredith is an attractive damsel in distress.  Veteran Anna Lee has a fun part as a court lady and witch (and the inspiration for one of Army of Darkness‘ most famous scenes). Even much-maligned leading man Mathews is more than adequate. Granted, he’s no Doug MvClure, but he’s acceptable.
The Seventh Voyage of Sinbad is a much better movie, of course, but you already knew that.