Laugh while you can, monkey boy!

Once you have checked out the other posts, be sure to come back here, because we have a great villain waiting in the wings, and we found him in the 8th dimension nonetheless.
So get ready for a close encounter wit Dr. Emilio Lizardo, alias Lord John Whorfin. And no kiddin’.

Part 1 . These guys are mocking us!

Considered today a cult movie, W.D. Richter’s 1984 film The Adventures of Buckaroo Banzai Across the 8th Dimension (from here on, Buckaroo Banzai, in bold) left the viewers at the time baffled, if not downright angry. I remember my sci-fi-savvy friends, people that could quote to you chapter and verse of 2001 or Silent Running, describing the movie as an incomprehensible mess or, in true nerd fashion, as an attack, lampooning the nerds and the geeks allover the galaxy.

And it sort of feels right to post about Buckaroo Banzai’s nemesis on the 25th of May – celebrated as Towel Day, the nerd festivity in honor of Douglas Adams and his Hitchhiker’s Guide to the Galaxy… another monstrously popular piece of science fiction that had a lot of geeks enraged when it first came out.

Just like Adams’ novel, W.D. Richter’s movie was in fact an extremely intelligent distillation of a lot of classic tropes and elements derived, mostly, from old pulp stories and movie serials. There is in the construction of the Banzai mythos a love and a care for the source material that is impossible to ignore. And true to the classic structure, the movie drops the audience into the story halfway through, like this was just another installment of a well-known and much loved serial, the backstory perfectly familiar to the audiences worldwide.
The effect was a little like watching Avengers: Endgame without having seen any of the previous movies, without having ever read a Marvel comic or watched a cartoon.
The nerds – or at least some of them – did not take it nicely.

Part 2 . The Story and the Cast

Buckaroo Banzai is an Asian-American (portrayed by Peter Weller) physicist, neurosurgeon and rock musician, a Renaissance man that fights crime and lives a life of adventure with his team of companions (yes, just like Doc Savage). The success of his latest experiment (driving a car through a mountain, as one does) attracts the attention of Dr Emilio Lizardo, a mad scientist and a member of an alien race (the red lectroids) exiled to the 8th Dimension – that now is accessible through Banzai’s car-through-mountain technology.
Buckaroo Banzai and his team/rock band the Hong Kong Cavaliers track the evil lectroids to Grover’s Mill, NJ, where they landed in 1938 – and Orson Welles covered for them with his War of the Worlds radio Broadcast. Then the lectroids attack Buckaroo’s base of operations…

So here you have it – a tongue in cheek, reference- and easter-egg-heavy story that still takes itself seriously enough to play it straight. Backed by over 300 pages of notes about the narrative universe developed by W.D. Richter and Max Rauch, the movie conveys an incredible sense of place – it really creates and suggests, more than showing, its unique universe. Granted, the special effects show their age (this baby is 35 years old) but the look of the movie and the cast alone are incredible. 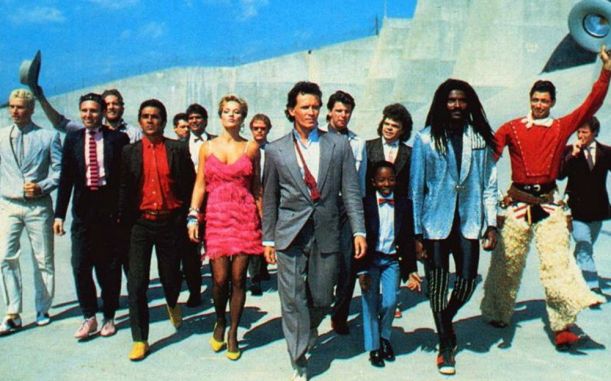 The cast: Peter Weller as Buclaroo Banzai, Ellen Barkin as his long lost love (or her sister), Jeff Goldblum and Clancy Brown headlining the Hong Kong Cavaliers, Christopher lloyd as evil lectroid John Bigbooté and then, towering above them all and on the par with the hero, the bad guy… John Lithgow’s doctor Emilio Lizardo.

Emilio Lizardo, an Italian, Fascist-era scientist is possessed by John Whorfin, one of the leaders of the evil lectroids – twopersonalities, both with their reasons for hating Buckaroo Banzai and wanting to steal his technology. John Lithgow, who got the Italian accent by observing one of the tailors in the MGM costume department, said playing Lizardo was like playing the madman from Cabinet of Doctor Caligari …

One of the enduring pleasures of watching Buckaroo Banzai is the wealth of one-liners that are extraordinarily quotable – and doctor Emilio Lizardo has a few – including the one that serves as title for this post.

Once again, the fact that for all its over the top ridiculousness Emilio Lizardo is played straight is one of the strong points of the movie. That of course never rises above the level of classic cliffhanger fare, but rides its subject matter with ease, class and panache.

Lizardo, that Lithgow plays as a non-human alien filtered through a caricature of Benito Mussolini, almost steals the show from the hero, and remains one of the great underrated bad guys of 80s cinema.

It was, of course, a disaster – and the movie made less than half its cost of 12 million dollars when it hit the screens. The planned franchise was killed.
Or maybe not – maybe the announced Buckaroo Banzai Against the World Crime League, mentioned in the end credits,is just another part of the complicated metafictional worldbuilding of the film.
Let’s not forget that Buckaroo Banzai (the character) has his own comic book within the movie, and a boy scout-like fan organization, the Blue Blazers. In such an intricate mirror game, it’s hard to decide what’s real and what’s not.

If the franchise failed to materialize, we did get a book – that sort of integrates the movie – and various series of comics, and in time it became the object of a cult following among the same people that had reacted with hostility in the beginning.

But they still don’t know about the watermelon.