About Anne
Award-winning historical novelist Anne Easter Smith is a native of England, who spent part of her childhood in Egypt. Educated at an English boarding school, she arrived “for a two-year lark” in Manhattan as an executive secretary from Swinging ‘60s London—and never went back there to live. Somehow she wound up as the Features/Arts Editor at a daily newspaper in northern NYS, and went on to publish articles in several national magazines, which gave her the confidence to embark on her first best-selling novel, A Rose for the Crown. Anne’s muse is the recently re-interred King Richard III, whose life and times she has studied for fifty years, which led to a five-book contract about the York family during the Wars of the Roses with Simon & Schuster’s Touchstone Books. The King’s Grace won the Romantic Times Best Historical Biography award in 2009, and Queen By Right was nominated in the same category in 2011. Her latest book of the series is This Son of York, which finally sees Richard as protagonist. Known for her period detail, she has been a regular panelist at the Historical Novel Society Conferences and has taught workshops on researching for historical fiction at the San Miguel de Allende Writers Conference. Anne and her second husband, Scott, live in Newburyport, MA, where Anne is very involved in her other passion—theater. 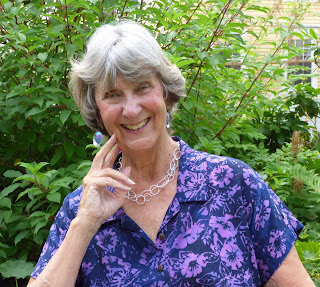 A Note From Anne
I am delighted Diana has invited me to tell her loyal readers about my new book This Son of York. Diana doesn’t really need to read it as she is as loyal a Richard III fan as I am! But I am grateful to tell you all about my passion! After five books about Richard’s family, This Son of York is the last in the series about the Yorks in the Wars of the Roses, and Richard is finally my protagonist.
“Write what you know” was often advised when I plunged into the murky waters of literary endeavor and found myself floundering about in that terrifying first foray. So I did.
What I “knew” centered on a king who died 528 years ago on a boggy battlefield outside of Leicester, smack in the middle of England. A history nut from adolescence, I came upon a book in my early twenties by English mystery writer Josephine Tey called Daughter of Time that repudiated everything I had learned at school about one of our “Bad” kings, Richard III. When I had turned the last page, I became a Ricardian fanatic. This Son of York is my homage to Richard and the book I should have written first but was too chicken to get into a man’s head!
What they didn’t tell me about writing was that, along with your knowledge of a subject, a strong dose of passion would lift your book above the ordinary. I learned this when an editor recognized it in my first novel, A Rose for the Crown. She told me my passion for righting the wrong done to Richard shone through every page. But that was my protagonist Kate Haute’s perspective on him as his mistress, not Richard’s. This Son of York finally puts Richard front and center.
As well as gaining the writing chops to tackle a man’s perspective, I became inspired to give Richard his due when they discovered his grave under a car park in Leicester in 2012. I was so moved when I stood on that grave (now enshrined in strong plexiglass, I hasten to add!) and a hologram faded in and out showing the position of the skeleton. After all the information gathered from studying those bones, I realized we now need a new look at Richard for the 21st century. And I was the one to tell the story.
About THIS SON OF YORK 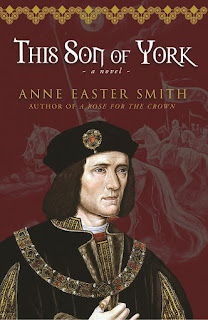